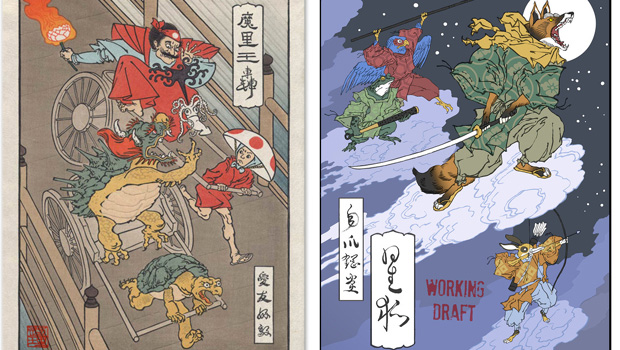 Just over a month ago, I shared some more amazing works by illustrator Jed Henry. These pieces of Nintendo fan art are rendered in the Japanese ukiyo-e style, re-imagining our favorite game heroes in imaginative new ways. Jed had plans to run a Kickstarter, starting on August 1, in order to turn at least one of his pieces into an actual woodblock print. It’s now August 2 — how is progress so far?

Originally, Jed was only going to have professional woodblock carver David Bull produce prints of the Mario Kart-inspired “Rickshaw Cart,” but because of the success of the fundraiser, David has started to work on prints of the Star Fox-themed “Fox Moon” as well. If you want to get your hands on either of these authentic masterworks, you’ll have to donate at least $135. If that sounds too rich for your blood, you can pledge less and request not-as-amazing-but-still-high-quality giclée prints of any of Jed’s 12 other designs.

Ukiyo-e Heroes [Kickstarter] (Thanks for the alert, Ryan!)