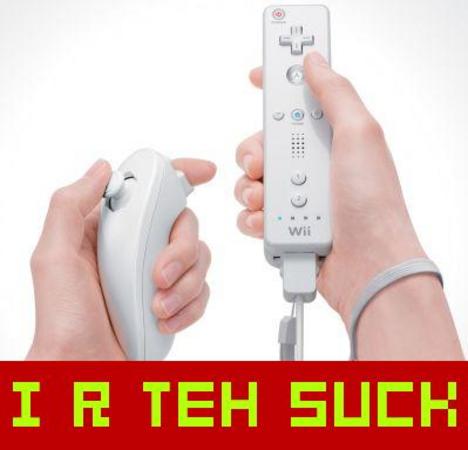 Given the fact that my last job allowed me to rent a nigh-immeasurable number of Wii games for free, I’ve had a fair amount of experience with the system. And while I still like my Wii — without it, I would have never known the pleasures of actually winning a boxing match — it has to be said that the Wiimote, and its interaction with the television, needs (at least) two major upgrades.

Both of these complaints are directly related to control for FPS games. Granted, there’s about a million complaints anybody could have with the Wiimote (speaker is of crappy quality, you’re required to be far too close to the sensor bar, etc), but I’ve chosen to focus on these if only because their faults render the two main Wii FPS games (Red Steel and Far Cry) almost unplayable.

Are you a bad enough dude to withstand potentially redundant criticisms and angry (but mostly irrelevant) rantings?

If so, hit the jump.

Remember when you first heard about the Wiimote’s versatility? What were the first two things you thought of? Perverts and sissies aside, it’s probably a reasonable guess that you wanted a sword fighting game and a really good gunplay game. While neither have been delivered to us yet, the Wiimote (in its current state) is at least adequately capable of recreating the experience of holding a sword.

It is not, however, even remotely capable of recreating the feel of a gun in one’s hand.

The importance of some sort of gun peripheral is not only aesthetic — it feels more fun to hold a gun than a remote — but directly related to gameplay longevity. To put it simply: holding the Wii controller like a remote throws off your aim. When you play a light gun game, you aim down the barrel of your gun and, and you therefore have a definite idea of where your shot is going to hit. When you aim the Wiimote, you have nothing to aim down other than your own arm, or the Wiimote itself (which cannot be counted on for accurate shot placement, as the next section will describe).

Additionally, it’s pretty rare that one’s wrist will become tired from playing a traditional light gun game, but this is not the case when holding the controller like a remote. The grip is unnatural, unintuitive, and, in the end, can begin to make your wrist hurt a bit. This may sound like a pansyass complaint, but imagine if you played a Wii FPS as much as you played Halo: we’re talking about bending your wrist in an unnatural way for hours at a time. If FPS games ever become really popular on the Wii (and they should, given their potential on the system), this problem will have to be addressed. One just hopes it’d be sooner, rather than later.

2. Let ME calibrate the pointer position.

The second (and, in my opinion, biggest) problem with the Wiimote is that it constantly assumes that the sensor bar is perfectly positioned in relation to your TV. This might make sense if the sensor bar was actually interpreting the Wiimote’s actions instead of just acting as a random conduit for them.

What results is an almost universal inability for any Wii system to adequately determine when you are truly pointing your Wiimote at the center of the screen. I’ve played several different Wii systems on several different televisions, all with the same result: depending on exactly where your sensor bar is placed, the Wii cursor can be anywhere from a couple of inches to an entire foot off the mark.

And yet, we’re only given two options to even minutely affect this problem: we get to tell the Wii whether the bar is ABOVE the TV, or BELOW it. This is sort of useful, but not really: since your Wii has no idea how large your TV is, it remains completely incapable of determining  exactly WHERE the center of your TV is. Often times, I’ve found that the only way I could get my Wiimote cursor to appear in the dead center of the screen was by pointing my Wiimote directly at the sensor bar, which more or less completely defeats the purpose.

When I play an FPS, I want to be able to look down my Wiimote and see that my crosshairs are exactly where I’m pointing it. I want my movements to be perfectly mimicked by the onscreen cursor: arcade-style light gun games do this effortlessly, so why can’t the Wii?Hell, the goddamned Super Scope allowed you to manually calibrate your cursor to the center of your screen. There’s literally no excuse for why the Wii can’t do this.

It is an ENORMOUS problem which prevents literally all FPS games from reaching their fully realized, totally immersive potential, not to mention all of the other pointer-reliant games like Wario Ware or Super Mario Galaxy.

The real question, though, is whether or not it’s even possible to fix this problem. It seems ingrained in the system hardware, and given Nintendo’s sluggishness in releasing Wii updates through WiiConnect24, I can’t imagine this problem getting fixed anytime in the near future.

Agree? Disagree? Am I insane, or a Nintendo hater? Hit the comments.

Filed under... #Also cocks#Does it suck?