A few months ago I did a story on the Miss Video Game pageant, and at the time I backed the competition and even entered as a contestant. After three months of being a part of the contest, exchanging e-mails with the people running it, and even reading information about the contest from other sources, I’ve decided to remove myself from the competition completely.

I admit that in the beginning I liked the idea of the contest: female gamers from all over the world competing in an online gaming tournament and pageant to become a representative of the female gaming community. However, after being involved in the farce and possible scam that is the Miss Video Game pageant, I can no longer be a part of it, nor stand behind it.

From day one, the whole thing has been run unprofessionally and has failed to impress anyone but those too dazzled by the whole idea of winning the chance to be in the public eye. I too was suckered in by the whole idea, but after seeing how many people were questioning the contest’s legal specifics, along with the downright suspicious manner in which they were running things, I realized that there was something truly wrong with the pageant. Read on for the full story behind the potentially harmful competition.

When the contest first started, the mission statement and front page claimed the contest was a female gaming competition that wanted to showcase female gamers and their talent and to ultimately find a female gamer to be a role model and spokesperson for the gaming industry.

However, they also mentioned in the mission statement and in the original front page that the women signing up didn’t have to play video games. The official rules stated that anyone who has played ANY electronic game can sign up. So which is it — do you want gamer girls or not?

How can you have a contest to find a female gamer spokesperson, but not require them to play video games? The people at Miss Video Game claim that they didn’t put gaming skills as a requirement for entry, because they didn’t want anyone to feel like they couldn’t compete if they weren’t gamers but wanted to learn about gaming.

As a gamer I like to see new gamers join our community, but how can you expect a new gamer to represent a community they have only been a part of for a few days? If this contest was about finding a suitable role model for young gamers, then I’m afraid and offended by what some of these contestants are going to teach the future gamers of the world. Some contestants are posting pictures of themselves in lingerie or less, cheating on their view counts, and swearing in their profiles.

Congratulations on setting such wonderful standards for your ideal role model. The rules of MVG even state that any pictures containing nudity or sexual lewdness would be removed, yet any of the pictures that are sexual have not been removed. Exactly what does the company behind MVG consider lewd? I’ve seen profiles of girls in their lingerie, posing naked but slightly covered by an object, and even one that had their main profile picture as simply just her cleavage. No head shot, just boobs in a bikini. 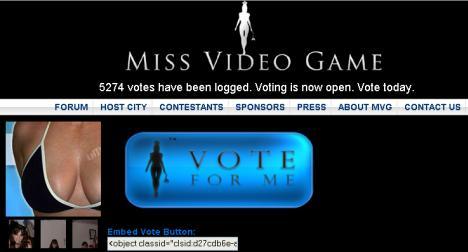 Getting into the legal issues of Miss Video Game, you find that no one was required to sign any agreements with the company when they entered. Normally when you enter a contest with any company that will possibly end with the contestant either winning a vacation or having their image used for their product or service, the company makes you look over a set of rules and legalities, and then has you sign or check the little box saying you understand all the above stipulations mentioned, and agree to them.

MVG had nothing like that before we entered the contest and even the contest rules weren’t posted until maybe a month afterwards. When the contest first started, there was a note posted above the application page that stated all entries had to be 18 years and older, but profiles for girls younger than 18 were popping up on the site and not being removed.

MVG decided to change their rules and allow for younger entries as long as they had their guardians approval for flying to with them at their own expense.  It’s doubtful any of the people were made aware of this, because there were no contest rules available to see until December 5th, which even the site announces in their press section. Again, some clear and definitive rules or stipulations would have made it possible to understand.

When the contest first began a judge application box on the Web site was originally used for anyone to apply to judge the final contest in , but now MVG claims they are bringing industry people on board to judge instead, and the applicant box was jettisoned mid-pageant.

Scrutinizing over the company behind MVG, Miss Video Game Inc., you would find that they weren’t even listed on the site at first, until Trina and I from Gaming Angels started looking around for their registered business, which we couldn’t find. Of course they weren’t registered with something like the Better Business Bureau either.

The only information on the site was a mailing address which has since been removed.  I finally asked for a copy of their business license which they begrudgingly forwarded to me. The issue date for the license was ; two months after the contest had already started.

In a recent interview Mark Donavon, MVG owner, claimed that the online gaming portion of the contest will be handled by a company from Alberta Canada called Titan Gaming, which also has no information that could be found. I did manage to find the “future website” of Titan Gaming, but there’s nothing about the company and no mention of the MVG. Also, when I tried to email the company to find out further information, the email address came back nonexistent.

MVG Inc. owner Mark Donovan claims he created MVG to give back to the gaming community, since he has long enjoyed gaming himself. That’s a nice gesture, but Mark refuses to let people know how he can afford to put on this pageant.

He claims that MVG is backed by a privately owned company that wishes to remain anonymous. He has also claimed that the pageant is so well funded that they don’t even need to actively pursue sponsors to hold the event, yet they still have a spot on the official Web site for sponsors to sign up. Of course, if there are any sponsors at this point, I don’t know, because only one sponsor appeared briefly on the site, and was then removed. Why any company would want to sponsor an event that won’t even post them on their site for advertising purposes is beyond me.

Every event like this must have some sort of profit motive; the ending goal is to make money off it through sales, advertising, or exposure. Even when a company holds a charity event, they are still advertising their own company and the sponsors involved in it. I don’t see any reason why MVG Inc. would wait to promote their sponsors until the actual event, when they have so much traffic going to their site right now for voting. I’d love to know how exactly MVG Inc. is making any profit from this pageant so far. The only thing they were selling was MVG clothing in their Café Press store that was only on the site for a month and then removed.

The whole MVG Web site itself was a mess right from the beginning with the spelling and grammar mistakes, bad links, and horrible load times.  For two months it took forever to load and often didn’t at all. Finally, three days into the voting, they changed servers and improved things. The voting process requires voters to enter an email address, but on the first day of voting, this feature wasn’t working.

Also, when the field was fixed, you had to verify your vote by clicking a link in an email that came to your inbox. This was not stated in the email or on the voting page, and most people probably deleted the email, because it was written like an offer to vote in the pageant, instead of a letter asking for verification to submit the vote. How many votes were lost because they weren’t clear on the requirements to vote? Many contestants had to redo their profile a few times due to Web site glitches.

The site also made profile changes that included new questions and more room for pictures. Further into the contest, they then added the option for Web-cam videos that only allowed for a quick three minute video, which seemed unfair because they promised we would be able to post normal videos on the site to help promote ourselves. For those three minutes they stated they wanted us to answer the same profile questions we did on the site instead of actually using the videos to creatively showcase our personalities in a way that would make us stand out.

The reason for that was because they didn’t want any lewd material popping up in the videos, or anyone promoting any other businesses, etc. Guarding against lewd videos they’ll do, but not lewd profile pictures.

Miss Video Game may just be new at doing all of this, and learning along the way, but honestly with all these mistakes and lack of a credible sponsor backing them, I cannot in good faith promote or be involved with such an event or company.

How could anyone be willing to jump on a plane to and trust these people with their safety after all the information presented about this company and contest? If these people can’t even run a Web site, then how good do you think they will be at coordinating a live event?

All that I ask of the contestants still involved in the competition is that you keep all these points in mind, and be sure to take care and protect yourselves, because sometimes if something doesn’t feel right, it usually isn’t.