You would think Donkey Kong would be on top of the world.

He is one of the most iconic videogame characters ever created, his love of banana coins is known the world over, and his new game, the most excellent Donkey Kong Country Returns, comes out in just a few days for the Wii (review coming soon!).

But behind this furry life of banana bliss lies a simple gorilla with a dark past. A past full of family secrets, abandonment, tragic loss, and shocking crimes of passion.

A past that would even make Dickens himself gasp in disbelief.

Hit the jump for the true story of Donkey Kong and his family.

The epic tale … of the Kongs.

It was 1981 when Donkey Kong was born. Kids around the world, adorned in jelly bracelets, would flock to their local arcade after watching Danger Mouse on TV to play the game that everyone was talking about.

Donkey Kong, a giant ape created by Nintendo, was the star of his own arcade game.

It was the hottest thing at the time.

He was going to be a star.

But, immediately after his arcade game was sucking in quarters around the world, the sad and troubled times began.

Donkey Kong’s name was plastered on the side of every colorful arcade cabinet, yet it was his nemesis, the plumber Jumpman (later to be known as Mario) that garnered all the attention.

Jumpman. Mario. Whatever you called him, he was out to do nothing but destroy poor Donkey Kong. An angry animal-hater armed with a hammer, Mario had his eyes set on Pauline and would do anything to steal her away.

But Donkey Kong, being the generous simian he was, did nothing but extend the olive branch to Jumpman. He offered him giant barrels (most likely filled with cupcakes or puppies) to show Mario how much he cared. Donkey Kong just wanted to live in peace with his love Pauline at the top of his construction site.

But what did Mario do? He just ignored these gifts by jumping over them or, even worse, destroying them completely with his horrible hammer.

As his videogame came to a close, Donkey Kong was alone. Pauline had left him to be with Mario. A plumber. The brooding, strong Donkey Kong lost his true love to a plumber. In red overalls.

A family is born

A year later, a miracle happened. Donkey Kong had a son.

Although almost nothing was known about the mother, rumor has it Donkey Kong met a younger gorilla in a local banana bar. After wooing her with — what else! — barrels full of cupcakes and puppies, this mysterious woman spent the night with a smitten Donkey Kong.

In a sad twist of fate, though, Donkey Kong Jr.’s mother left the family, leaving behind only an oversized white onesie wrapped around her precious baby gorilla.

Donkey Kong was left to raise his son as a single father. A single father who, because of his original arcade game, was being viewed as a villain around the world.

Nothing was going right.

Soon after Donkey Kong Jr. entered the world, he was asked to star in his own videogame. A moment any father would be proud of … if it wasn’t for the fact that Mario kidnapped Donkey Kong for no apparent reason and locked him a in a tiny cage.

So before he even had the chance to talk or go to his first day of school, Donkey Kong Jr. was tasked with rescuing his father from an evil plumber. A plumber who had already broken his father’s heart a year earlier.

Even for the most precious of Kongs, life was already proving to be quite the challenge. 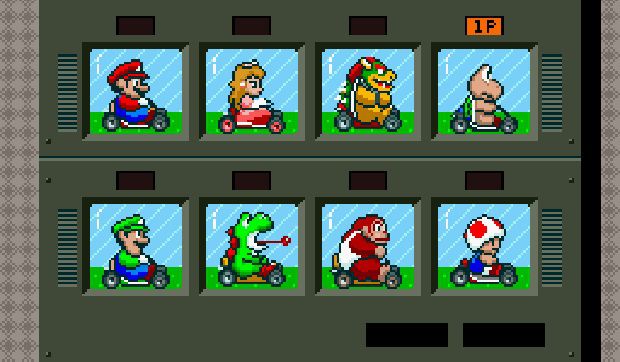 A decade of silence

After Donkey Kong was freed, he (understandably) descended into a major depression.

Pauline had forgotten about him. He had been humiliated in front of his newborn son.

For an entire decade Donkey Kong chose to go into hiding. Unable to even afford a second outfit for his child, Donkey Kong and Donkey Kong Jr. left the videogame spotlight to see if they could get their lives back on-track.

In the early ‘90s an opportunity arose that promised to make things much better.

Asked to be a supporting player in a brand new racing game for the Super Nintendo, Donkey Kong Jr., now a teenager, jumped at the chance to stage a comeback for the Kong family.

Even though he was asked to sit alongside Mario in the unfortunately titled Super Mario Kart, Donkey Kong Jr. wanted nothing more than to make his father proud. He looked past the old rivalry between Mario and his dad and jumped at the chance to star in a videogame once again.

In a twist of bad luck known only to the Kongs, Donkey Kong Jr. ended up being a “heavy” character, paired up with despised villain (and noted kidnapper) Bowser as one of the least played characters in the hit kart game.

Donkey Kong Jr.’s return to the world of videogames was once again met with disappointment.

A Rare case of good fortune

Although Super Mario Kart was a huge international success, Donkey Kong and his son found little to be happy about. It wasn’t until a couple of years later when things finally started to turn around … but in a completely unexpected way.

After cashing in on a critically-acclaimed reimagining of the original Donkey Kong for the Game Boy (one that humiliated poor Donkey Kong once again), things entered into a major downward spiral.

Donkey Kong Jr. had a son, this one also named Donkey Kong, making communication between the three Kongs very confusing. “Hey, Donkey Kong, can you pass me that banana?!” was met with the entire family turning around and answering with a deafening “Aroooraroooooooraaaaa!”

In addition, grandfather Donkey Kong became crankier and crankier, doing nothing but constantly complaining about old times and how things were so much “harder” for him in the retro era.

The family was struggling, living out of a tree house stocked with nothing but bananas and bouncy tire swings.

It was a sad state of affairs.

But, in what the Kong family would come to refer to as “The Golden Year of 1994”, a British videogame development company named Rare would change the Kongs’ lives … forever.

In 1994, the Super Nintendo was losing steam. The SEGA Genesis was starting to take over with many hit games, most starring the popular (and known speed dealer) Sonic the Hedgehog.

Donkey Kong Country, the graphically revolutionary platformer, was an enormous hit, skyrocketing sales of the Super Nintendo past the Genesis.

The Kong family was on top. They single-handedly saved the SNES!

And instead of being viewed as villains, Donkey Kong Country had Donkey Kong and his new nephew Diddy Kong starring as the protagonists. Protagonists. The word was music to the Kongs’ ears.

And not only was Donkey Kong Country a beautiful, beloved masterpiece, it actually starred the entire, ever-growing Kong family. No more would Donkey Kong and his direct line fight enemies alone. The whole family would join the fight, united. One big, happy family. 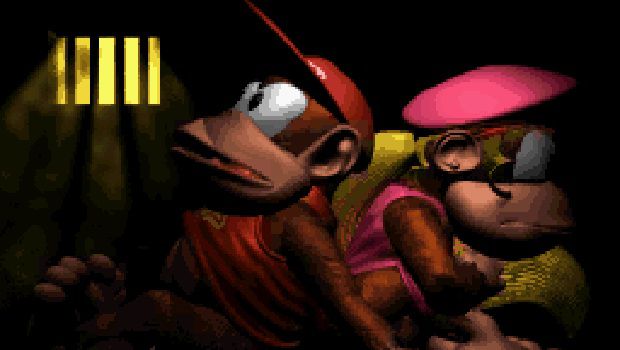 Like the Jacksons, the success of one family member inevitably led to the entire family wanting to become stars. Having the entire Kong family starring in Donkey Kong Country and its two successful sequels was a nice change of pace, but it threatened to derail the fantastic momentum Donkey Kong was gaining.

Sure, the family had its successes — nephew Diddy and his girlfriend Dixie were a brave, energetic match made in heaven.

But then the more “colorful” members of the family started coming out of the banana-stained woodwork.

First there was Cranky Kong, the original Donkey Kong. Now a grandfather, Cranky lost the use of his legs and was forced to walk around with a cane. Gone were the days of jumping on vines and destroying metal girders.

Confined to a rocking chair on most days, Cranky’s role in Donkey Kong Country was nothing more than a complainer, an old gorilla angry at the “kids of today” and longing for a time when videogames were a much purer form of art.

And then there was Candy Kong. Oh, Candy. Donkey Kong’s girlfriend started off as a great gorilla girlfriend, but the minute she opened her “save points” up to any random adventurer, well, the relationship went completely downhill.

Lucky for him, these wacky family members only added to the appeal of his games.

The Kong bad luck was starting to turn.

And in a shocking twist, Cranky Kong’s wife, Donkey Kong Jr.’s mother, Wrinkly Kong — the mother thought to have abandoned her family all those years ago — made a grand return in Donkey Kong Country 2. Her return was completely unexpected, but just the sight of her, the grandmother he thought he never had, touched Donkey Kong’s heart.

She sadly passed away before the release of Donkey Kong 64, but the family reunion was so special it erased any bad memories the family once had.

Despite their eccentricities, the Kong family stayed strong through many hard times. And it was this support that helped them in the years to come. 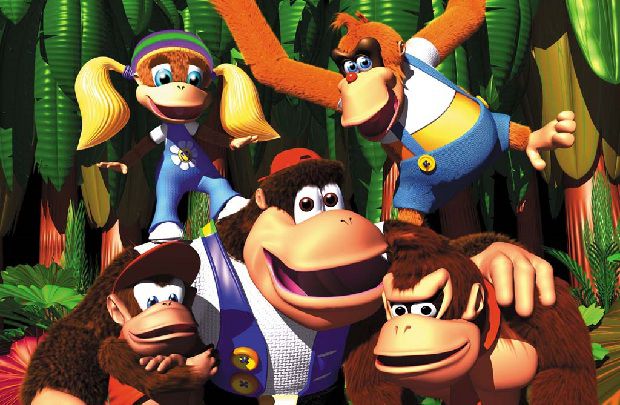 Following Donkey Kong Country, the Kong family (in particular, Donkey Kong) was admired and respected all over the world. Even though some people still viewed the family as troublemakers, gamers everywhere embraced the Kongs and welcomed them into their homes.

After a successful platformer on the Nintendo 64, Donkey Kong and his family went to star and costar in many future games. No longer ignored by Mario and his friends, Donkey Kong became a playable character in the palm-ripping minigame fest Mario Party, an instant classic.

Popping up in many videogames, Donkey Kong even went on to star in new genres of his own, as was evident in the releases of the bongo game Donkey Konga and rhythm/platformer hybrid Donkey Kong Jungle Beat.

Sure, there were some callbacks to darker times (Mario vs. Donkey Kong), but, all in all, Donkey Kong’s post-Donkey Kong Country years were flush with positive starring roles and a slew of unexpected success stories.

After dealing with a life of lost loves, ridicule, kidnapping, abandonment, and loneliness, the Kong family was finally happy.

What could the future hold for the Kongs? If the upcoming release of Donkey Kong Country Returns is any indication, things are looking up. The stellar Wii platformer is absolutely outstanding — one of the best games of the year.

You hear that Donkey Kong?! You and your family are starring in one of the best games of the year.

Somewhere, Pauline is staring into a single, peeled banana, wondering what life would have been like, had she just made a different choice atop that collapsing construction tower …