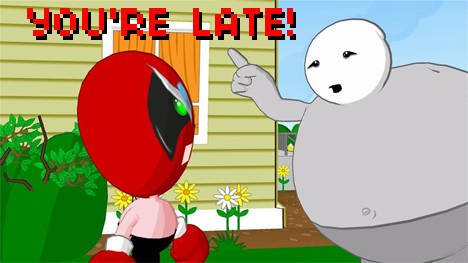 You may remember that Strong Bad’s Cool Game for Attractive People, featuring all of your favorite characters from Homestarrunner, was due for a July release on WiiWare. Well, July ends today. So, why am I not hanging out in Strongbadia with the tire? It seems we’ve hit a small delay.

Telltale Games has submitted the game to Nintendo and it’s currently working its way through the approval process. A post in the Telltale forums offers a little explanation:

What IGN said is true – we have submitted the game to Nintendo, and as soon as we get approval from them, it will be released quickly after that. We really are in the home stretch. We’ve been waiting to announce a release date until we have that approval, though, because until that happens, well, anything can happen! Getting games into WiiWare is a new process for us and we’re learning as we go, so I’m sorry if any of you are disappointed that tomorrow is the last Monday in July and you won’t have a Strong Bad game to play. On the plus side, we’re closer now than we’ve ever been, and very soon we should be able to tell you exactly when it’s coming out!

Of course, this doesn’t actually give any indication of when the game might actually see the light of day. It does sound as though they’re taking something away from the experience, so we can at least hope that future episodes of the game will be released in a more timely manner.