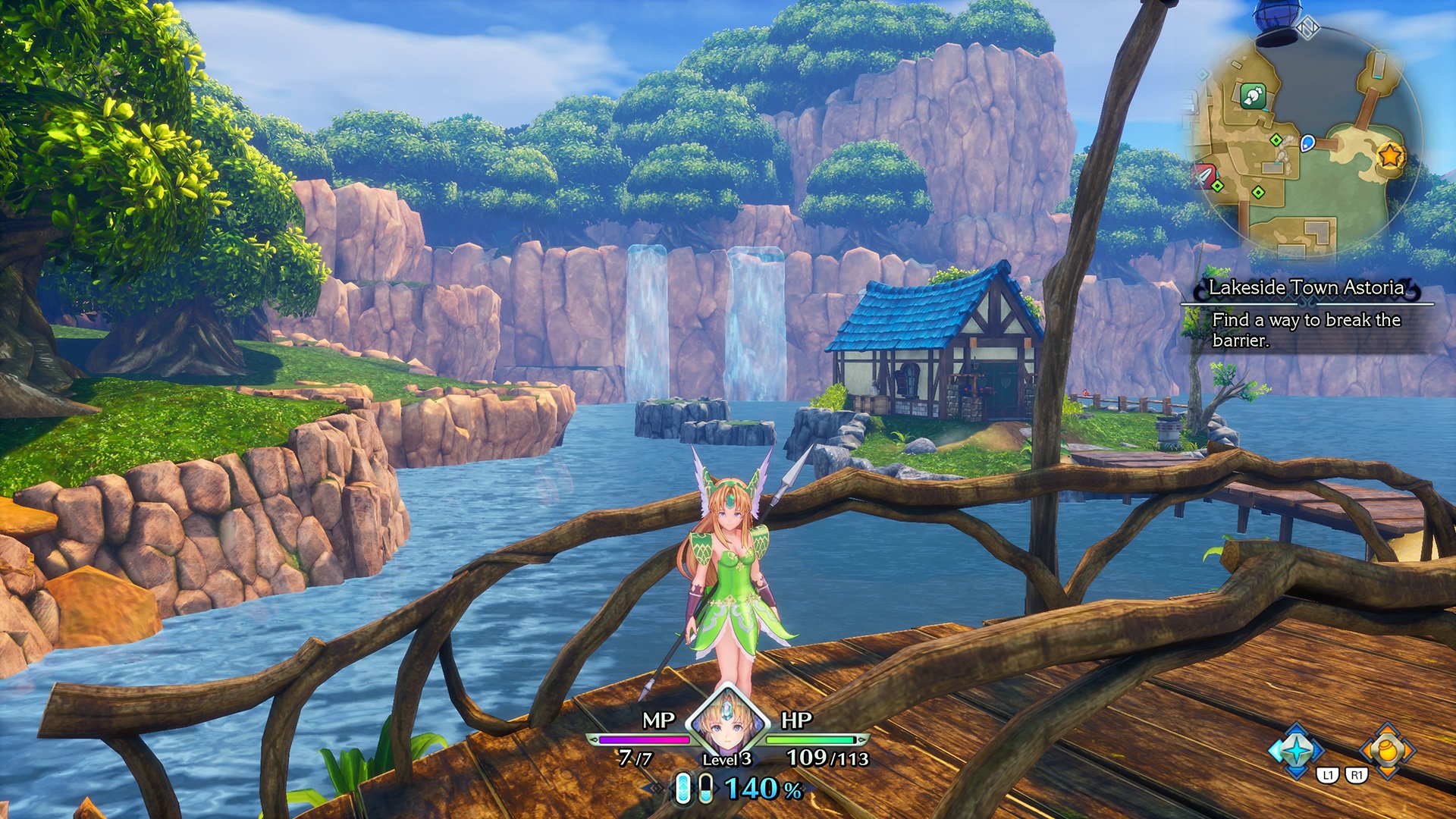 Trials of Mana strikes a nice middle-ground for fans who want a remake that doesn’t shed too many classic sensibilities. The game is beautiful in spots, budget-strained in others, and above all, faithful. For returning players, it’s going to be a treat. For newcomers, there will be growing pains to work through.

More than anything, I’m digging the crisp art direction, breezy-but-not-boring world exploration, and gorgeous soundtrack. These new takes on classic tunes are spot-on and lift the whole experience. I’m especially fond of the main theme, which is whimsical and valorous, and the Cascade Cavern jam.

A few areas, like this waterfall underpass, use their own custom framing.

The battle system – real-time combat with simple combo strings, lock-on, dodge-rolling, and enemies who very clearly telegraph their attacks – is great in theory, but the difficulty tuning isn’t quite right. Trials of Mana is far too easy, even on Hard. I’m happy I didn’t wipe to Full Metal Hugger, the demo’s one and only boss, but I didn’t feel any sense of danger from the big lug. You can pop his eyes on autopilot.

Granted, this is the beginning of the game, and Square Enix could quickly ramp things up. I picked up a ton of glowing collectibles and searched for treasure chests off the beaten path, so I wasn’t hurting for supplies, but I didn’t need to use any of them. The save statues topped me up, and that was plenty. Aside from the cave-dwelling goblins, I just wasn’t taking hits. The early foes are lackadaisical.

My other main sticking point is the cutscenes, which may or may not grate on you. I kept wanting to hammer through cheesy dialogue once I got the basic gist, which isn’t the best feeling. It’s one of those things you can acclimate to after a while – and maybe I’ll feel differently about the Japanese VO.

What else, what else? Oh! I like the menus. They’re clean and comprehensible, even at a glance.

Don’t listen to the ninjas, Elliot!

Basically, I have my reservations (some of which will probably ease up), but even in a worst-case scenario, this remake is going to make a lot of RPG fans happy. Let this demo be your barometer.

You can easily spend an hour-and-a-half with the Trials of Mana demo, and if you’re on the fence, it’s worth downloading on PC, Nintendo Switch, or PlayStation 4. I tested the latter version, which was heftier than expected – 7GB! It looked and ran great. I’ve heard the Switch version is pretty good too.

Your demo data will carry over to the full version of Trials of Mana, and you can have multiple save files to try out different party combinations (good luck settling on your final team composition). Heads up: you’ll be able to optionally play through your first companion’s backstory midway through the demo.

I know I gotta have Riesz and Hawkeye, but who else? Angela? Kevin? Don’t get me started on classes.