As much as I love all the comics, movies, videogames, and general chaos that accompany Comic-Con every year, I mainly make the pleasant Los Angeles to San Diego trip each summer for one thing and one thing only: the toys. Oh, those lovely, lovely toys.

Fighting through the enormous crowds, I do whatever it takes to fill my extra empty suitcase with as many fun toys as possible.

With Comic-Con starting bright and early tomorrow morning, I thought it appropriate to celebrate the larger than life expo by putting together a list of the ten best toys featured in videogames.

But what do I mean by “toys featured in videogames?” Well, I am not referring to “toys” in the head-exploding guns or crazy gadgets sense of the word. I am talking about actual toys. In videogames. Dolls, kites, toy trucks, blocks, etc. Those kinds of toys. There have been many of these featured in videogames over the years — some used in ways you wouldn’t expect! — and this list narrows them down to the ten best!

Which toys made the cut? Hit the jump for a list of the top ten toys in videogames.

Also make sure to check out Destructoid’s sister toy site Tomopop all week long. They are going to have some awesome Comic-Con coverage all about — what else? — TOYS! 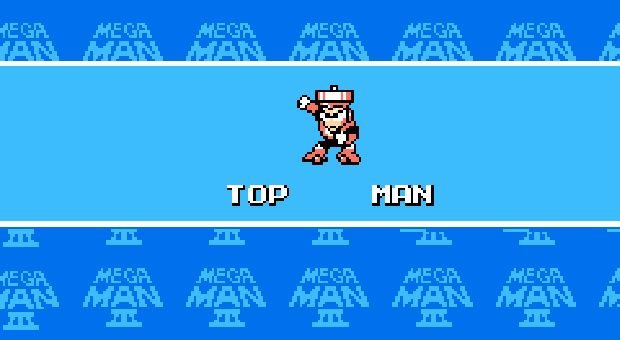 I never understood the appeal of a top. I mean, Inception is making tops cool again (wait, were they ever cool?), but what is fun about spinning something, staring at it, and watching it fall down? Oh, you get to do it over and over again for hours on end? Oh, well, never mind. That changes everything!

As cool as tops may be now, none are cooler than Top Man in Mega Man 3 for the original Nintendo. Not only is Top Man one of the best bosses in this is-it-or-is-it-not-better-than-Mega-Man-2 sequel, the weapon Mega Man gets for defeating the robot boss (Top Spin) is awesome and actually pretty useful.

Oh, who am I kidding? The Top Spin is pretty useless. But still, Top Man is a great boss with one of the better stages in the game. So let’s focus on that. TOPS! 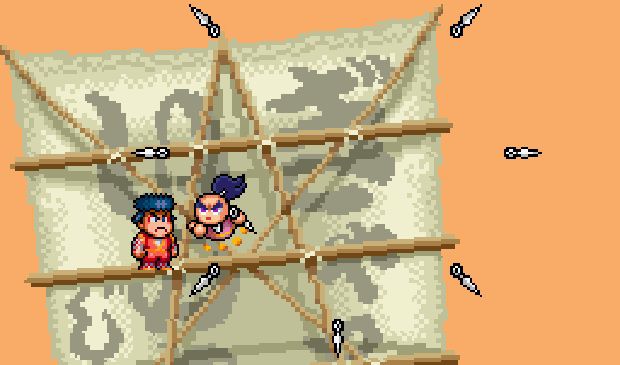 One of my favorite toys as a child was my giant owl kite. Make fun of me as much as you want, but I would sit outside in my backyard for hours watching the kite swoop back and forth against the bright blue sky. It was a very soothing and magical moment for me as a kid.

That is, until I flew it so high one day the string looped off the handle and my owl kite disappeared forever.

I miss that kite.

Lucky for me, there have been many kites featured in videogames over the year. My favorite, though, appears in The Legend of the Mystical Ninja for the Super Nintendo. At the end of the castle level, Kid Ying and Dr. Yang (the game’s two playable characters) balance on the side of an enormous kite, all the while fighting a challenging, hard-to-dodge ninja boss.

Yup. Fighting a ninja on the side of a gorgeous, 16-bit kite. That’s almost enough to make me forget about my beloved owl kite!

(You know I didn’t mean that, owl kite. I will never forget about you. Come back to me … ) 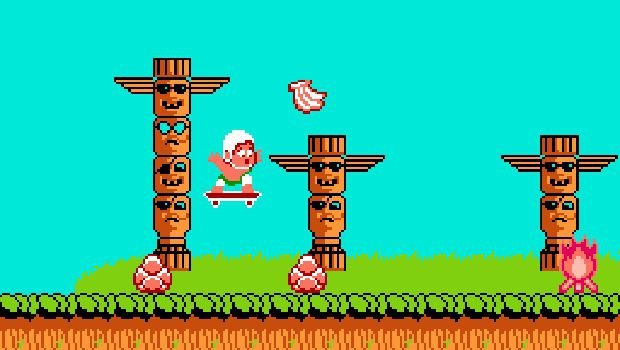 Getting the skateboard power-up in Adventure Island is always a treat. Seeing Master Higgins don his helmet and knee pads (safety first!) makes me giggle every time.

But this giggling immediately comes to a stop once I realize that GETTING THE SKATEBOARD POWER-UP IN ADVENTURE ISLAND IS TERRIBLE!

Seriously. By picking up the toy, Master Higgins is automatically thrust in a constant state of forward motion. This makes picking up the required fruit and jumping over the already-tough platforms all the more difficult. And, really, there is no reason to pick up the skateboard other than to make your character look cool and move a little bit faster through the level.

Still, something about that irritating skateboard makes me happy. Hehehe. Looking at his cute helmet and knee pads is making me giggle again. Damn you and your trickery, Adventure Island skateboard! 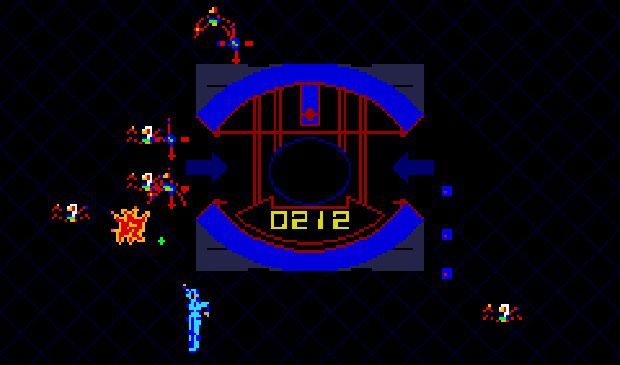 Playing with a Frisbee … er, flying disc in real-life is not nearly as fun once you get a hold of one in Tron the arcade game.

In Tron, the main playable character uses his badass flying discs to destroy mechanical spiders in an attempt to infiltrate the Input/Output Tower and receive instructions on how to destroy the MCP. How cool is that?! The last time I threw a flying disc it was to my dog Luna on the beach (which she did not catch, for the record). And as much as I love my Luna, she is not a mechanical spider.

New topic: How amazing would it be to have a mechanical spider as a pet? Discuss.

And that’s exactly what you get to do in Zombies Ate My Neighbors for the Super Nintendo.

To be fair, the water gun is not really the best weapon in the SNES cult classic, but it does kill most undead enemies with only one hit since it is filled with holy water. And if we all learned anything from 1987 masterpiece The Lost Boys, it’s that water guns filled with holy water are totally radical (and surprisingly effective). 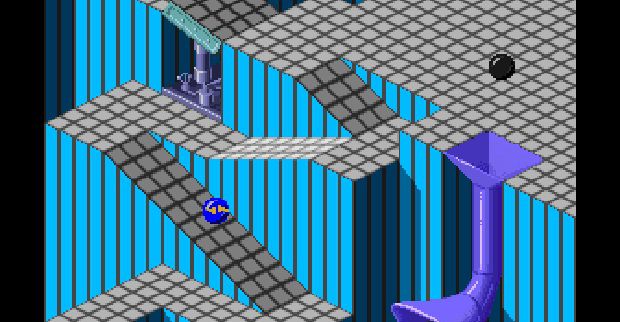 I have to be honest. Although I used to love playing with marbles as a kid, I never really knew any of the technical terms used to describe them (I would mainly use them to create makeshift pinball machines out of pushpins, rubber bands, and a bulletin board). Looking up information for this article, though, has kind of changed my opinion on the simple marble. It went from a harmless, rather innocent toy in my mind to something that, quite frankly, kind of intimidates me now.

Did you know there are marbles called the “Oxblood”, “Devil’s Eye”, and “Clambroth”? Those sound like the names of gangsters in the 1920s! And here I was prepared to make fun of the name “Marble Madness” (pfft, how can a wimpy marble be mad?). Never again will I think such crazy thoughts!

And the more I think about it, the more I get it. Anyone that has played Marble Madness knows those marbles can be quite the trouble makers! Have you ever played the game with a friend, only to find their marble rolling so far ahead your marble is forced to disappear and warp forward, your precious time stripped away from you?

Like the kite, the yo-yo has made several appearances in videogames over the years. (Two of my favorites are classics StarTropics and EarthBound.) But, for some odd reason — whether it’s my love of the addictive 8-bit Cyndi Lauper theme or how close this game is to my heart — my favorite use of a yo-yo in videogames is in The Goonies II for the Nintendo Entertainment System.

As one of Mikey’s main weapons (the other being a slingshot) the yo-yo serves as a veritable rat, bat, and spider killing machine.

It also comes in handy should Mikey ever find himself a guest on a popular Bulgarian talk show. 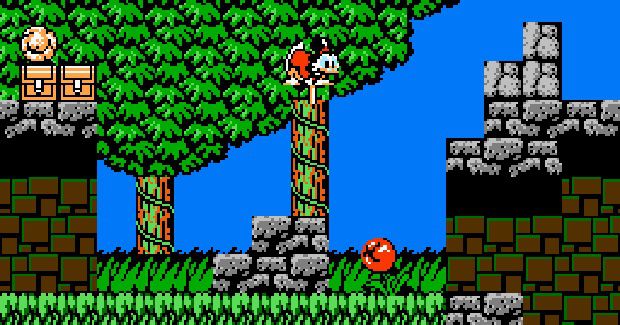 Okay, technically Scrooge McDuck, star of legendary NES game Duck Tales, doesn’t use an actual pogo stick to jump around and bounce on the heads of enemies — his cane turns into something that resembles a pogo stick.

But that doesn’t make it any less fun … and it’s close enough to an actual pogo stick to place it on this list. And, really, do I need a detailed explanation of why I am mentioning the glorious Duck Tales on any list? I would bring up the game in every article I write for Destructoid if I could. I love the game that much.

Let me guess, you now have the Moon level music stuck in your head. 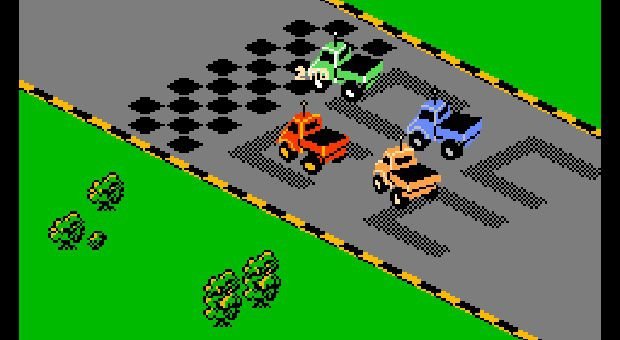 Controlling cute little remote-controlled cars and trucks around windy tracks in the NES gem is a blast, even all these years later. With upgradeable vehicles, weapons, and speed boosts, R.C. Pro-Am really was a revolution at the time (1988!) and inspired so many racing games that followed. Throw in the fact that the use of remote-controlled cars completely warrants the game’s isometric perspective and out-of-vehicle controls and you have a classic on your hands.

There have been some pretty great uses of remote-controlled vehicles in future games (Ape Escape is of notable mention), but R.C. Pro-Am will always be my favorite. 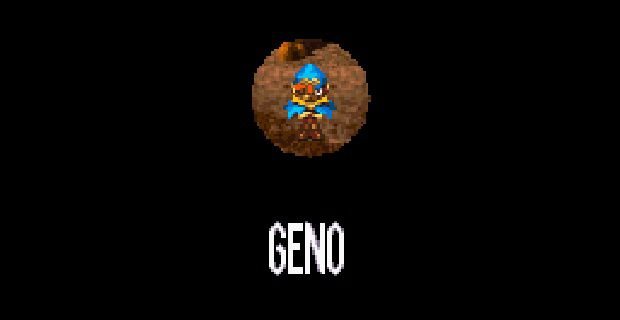 Anyone that has played Super Mario RPG: Legend of the Seven Stars knows the backstory of fan favorite Geno: he is the doll of a young boy, brought to life and inhabited by a star spirit intent on helping Mario recover the lost Star Pieces.

His incredible backstory alone makes him worthy of taking the top spot on this list.

But Geno is so much more than a simple wooden toy (in your face, Pinocchio!). He is one of the best playable RPG characters of the retro age. And that’s not just coming from a Super Mario RPG fanboy (although it is one of my favorite games of all time).

Geno is a wooden doll that punches his enemies in the face. He also has the ability to call down the energy of the heavens in battle. He is the fastest character in the game. The Geno/Mario/Mallow party combo is UNBEATABLE (well, save for the Mario/Bowser/Peach classic)! Oh, and did I mention he is a cocky bastard? (Best line: “I serve … a higher authority.”)

Geno is the best toy ever to appear in a videogame. I wish there was a way I could buy him at Comic-Con. Can you imagine how great that would be? Traffic on the way back from San Diego? No problem. GENO BLAST!

So, what do you think? Do you agree with the choices? Any toys of note I might have missed (my list of runner-ups is surprisingly long!)? And, just because I am curious, what’s your favorite real-life toy?

Enjoy Comic-Con! And make sure to check out Tomopop. They are awesome.