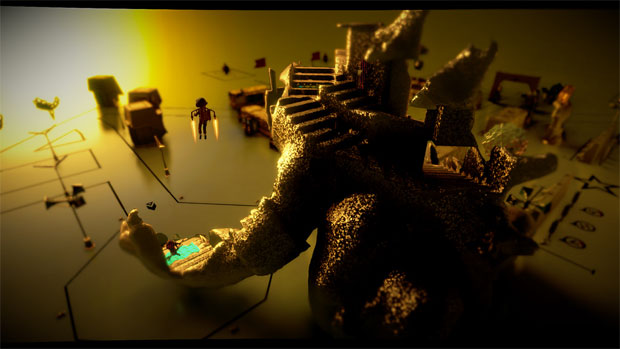 This is Q-Games, after all

The Tomorrow Children was one of the more intriguing, albeit overlooked announcements out of this year’s gamescom and the more I hear about it, the better it sounds. And there’s plenty left to hear — the team at Q-Games had orders from PlayStation 4 system architect Mark Cerny to create “something that was a bit different,” according to founder Dylan Cuthbert. It shows.

“If you were to distil it down to the most action-based elements — you explore the surrounding islands; you mine resources; you work out a way to get them back to town, then you use them to expand your town,” he explained in an interview on the PlayStation Blog.

“You can even craft tree saplings and do some farming if you want to — you can farm apples to feed the population you’re restoring. The accumulation of all that is that you fight these marauding monsters who’ll try to destroy your buildings. That’s the base loop.”

Beyond those mechanics and the gorgeous graphics made possible through cascaded voxel cone ray tracing, there’s also a social side to The Tomorrow Children in that you’ll be able to visit other players’ towns. “It’ll be more of a cooperative relationship at present, rather than antagonistic,” said Cuthbert, “but we’ll see where that goes after launch.”

To that end, Q-Games is planning to issue updates “very regularly” post-release. “Being able to build giant robots, for example — they can then go out and defend your town for you. There’ll be big content like that, but lots of bits of small content too, such as being able to buy your own house on the black market, and then just going in there and hanging out, should you want to.”

Between this and Bloodborne, I’ll wind up with a PS4 before long. Both games hit next year.