To say the new Tomb Raider has been controversial is to put it very lightly indeed. Ever since last year, speculation and arguments have been had concerning the motives of the game, the content demonstrated, and what Lara Croft’s new and tragic portrayal says about the state of women in games.

Some are eager to defend it, perceiving attacks on an industry they love and doing what they can to protect its creative freedom. Others see a game that shrouds male power fantasies in the clothing of an emotionally engaging experience, and are ready to condemn the game, the studio making it, and anybody who dares to look forward to it. 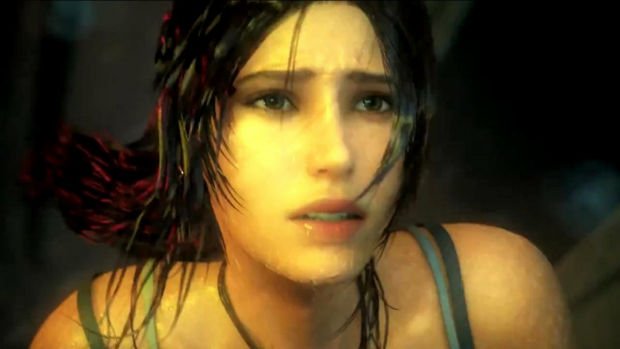 My personal take on the Tomb Raider reboot is that I feel the developers are trying too hard. I do not think, as some do, that the game is reveling in the abuse of women and trying to sexualize Lara’s physical and emotional torment for the gratification of its male audience. From the way the game is marketed, from the way its PR are talking about the game, the message radiates that the developers don’t quite know what they’re doing, and are firing a volley of tried-and-tested emotional trauma at the audience in the hopes that something will resonate.

That may not be the intent, and it may not be that evident in the final product. It is, however, what those talking about and showing the game are communicating, and if it’s not the intended message, the team really needs to stop broadcasting it.

Taking what we’ve simply seen in the context presented, Tomb Raider resembles Happy Tree Friends: Emotions Edition. At this year’s E3, when the game was shown off during Microsoft’s press conference, I only got to hear what was going on as I was typing up articles. It sounded like Hell trying to have sex with itself. Watching it back, and seeing the related trailers, I see a lot of a young girl having the crap consistently beaten out of her, all detailed in glorious high definition. Now, whether that troubles you or not is your own business — however, I think it would behoove us all to understand how some people might find it disturbing. You don’t need to boycott the game in order to understand that. It doesn’t cost you anything to see another person’s point of view. It doesn’t mean you are morally obliged to hate the game if you accept others disliking what they see.

To examine the problems people have with Tomb Raider, we have to break them apart, for the issues are several and the people concerned are varied. 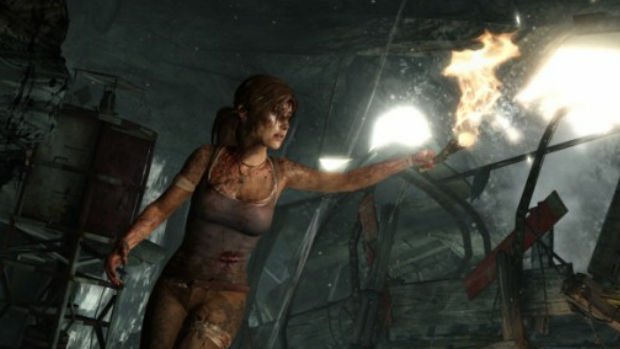 First of all, we have the contention that Lara Croft never needed a traumatic backstory. This is an issue that concerns more than games, and has been infecting the film medium for years. From Darth Vader to Hannibal Lecter, we’ve had our fill of previously enigmatic or otherwise interesting characters over-explained and given drearily traumatic histories in order to validate personalities or actions that never needed the extra validation in the first place. Most fans of Darth Vader or Boba Fett preferred the mysterious and masked antagonists, without needing to see the squidgy innards that made us want to feel sorry for them.

In the case of Lara Croft, I know from the fans I spoke to that they preferred Lara as a female character they could project themselves onto. They liked her as a slightly blank, but nonetheless capable and strong woman. Lauren Wainwright, staff writer for MCV and hardcore Tomb Raider fan, explained how she had always projected herself onto Lara, and how she now feels sidelined and snubbed by the idea of a Lara we would rather protect and care about like a strong boyfriend, rather than play as and feel empowered by. The concept of “protecting” Lara was boasted of by Ron Rosenberg in a Kotaku article that has set the Internet aflame with debate.

“I always projected myself onto her. However the interview is suggesting that (as a male) you’ll want to protect Lara,” she said on Twitter. “Not (as a female) become her/work with her.”

Again, whether you are looking forward to Tomb Raider or not, I do not think it’s unreasonable to ask you to understand how Rosenberg’s comments might offend somebody who has enjoyed the series the way Lauren does. At the very least, it is rather ironic that the big-boobed teenage wank fantasy seen in previous Tomb Raider games comes across as a stronger role model than the less-sexualized but altogether frailer and more vulnerable Croft seen in this new one. 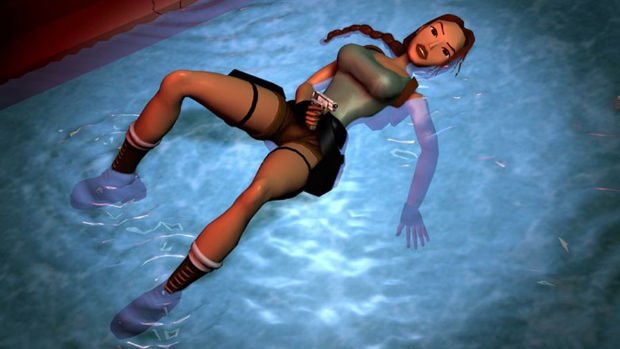 That brings us neatly to another dicey argument — the fact that Crystal Dynamics seems to believe the best (and perhaps only) way to make us care about a female character is to show us how strong she is for overcoming personal trauma. Again, whether you agree or not, there’s a wonderful case to be made about how much of a dull trope that idea is. When female characters are portrayed in any media, it seems like an easy go-to standard to have her overcoming abuse and tragedy to show us that she is a strong independent woman. That Crystal Dynamics felt the best way to make us care about Lara was to stick her, smack her, and have rape attempts made on her, does risk communicating the message that a woman is only as good as the shit she’s been dragged through, and again, I can see why that is an issue.

The rape issue in particular is a really thin line, and could go very badly, especially with Square Enix’s PR so proudly boasting about it and expecting the world to be impressed. Using it as a marketing tool is already a bit of a bad move, and it likely would have been better to have left it in the game unpromoted, rather than utilize it that way. It’s such a difficult subject to tackle, and when you insert it into a story, you have to be so astoundingly careful and good at what you do, to the point where I am not sure game developers are yet capable of pulling it off. As game pundit Robert Florence said, “Do you think a video game might handle attempted rape well? Games can’t even handle believable dialogue for soldiers.”

Not even the indie art game world is quite capable of getting it done correctly yet. I’m reminded of games like Edmund, which tried to be provocative with its subject matter, but came across more like, “Ha ha rape is so shocking and now I am shocking you.” It feels cynical and contrived, and the fact that Square Enix is showing its hand like this only serves to do the same for Tomb Raider — it makes it sound coldly calculated, whether it actually is or isn’t. 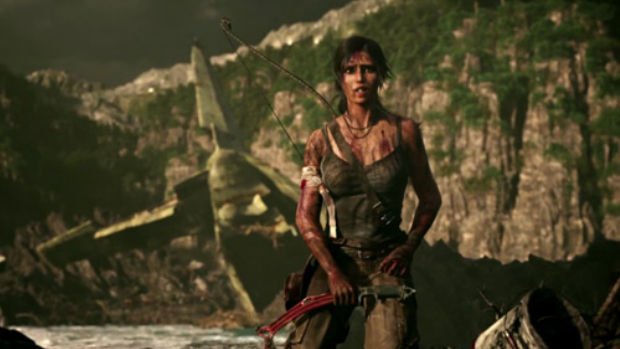 Now, all that said, there are some points to be made in favor of the content. My wife pointed out that, if we were to look at what Lara Croft does, going into dangerous territory populated by dangerous men, the likelihood of her being attacked and raped is depressingly high. I know far too many women who have been abused in some way just living in “civilized” society, let alone the wilderness. While it is true that players may want a powerful Lara, it is also true that any woman doing what she does would face an incredibly high risk of personal harm, the kind of harm that many men would find very difficult to understand and relate to.

I also feel that Crystal Dynamics at least deserves credit for giving us something different. There are many power fantasies on the market, while games where the player feels outmatched, desperate, and trapped in a tough situation all but died when survival horror was thrown into a ravine by publishers who saw no profit in the genre any longer. Now, we can argue all day whether Tomb Raider is the right franchise to do that different thing with, certainly. We can ask if Lara Croft was the right person for the job, and whether or not it would have been better to try this with an all-new intellectual property. We can ask if it even needs to be a woman who’s been beaten and fighting off sex attackers. We can rightly argue that, but I do at least appreciate the boldness of Crystal Dynamics, even if I feel the delivery is coming across — at this stage — as overwrought and potentially troublesome.

Of course, we also have one other important topic of debate — as a videogame, it looks superbly well made. Very Uncharted-like, despite the studio’s protestations to the contrary, but nonetheless a beautifully made game. I am probably more interested in trying this one than I have been for any other game in the series, so it’s definitely doing something right. There are those that wish to sidestep the issue of gender and narrative missteps completely, and just look forward to playing a good game. Such opinions are not invalid. Nobody should be coerced into having an interest in subject matter they’re just not interested in. 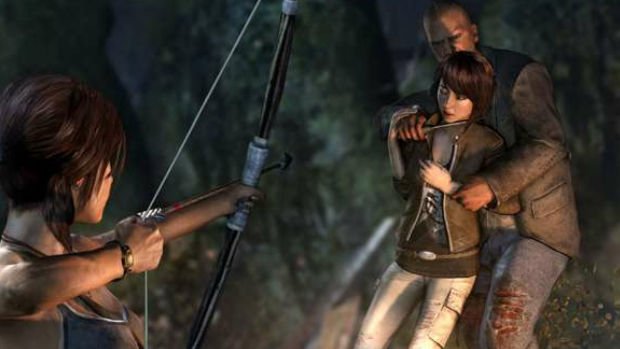 Everybody has a valid concern here, whether their concern is just wanting to enjoy a good game or wanting a female character to be more than a frail woobie that needs a fire blanket and a cup of cocoa. Everybody is wrong, however, in the way that they cannot debate these issues without screaming, raging, and making frankly ridiculous assumptions. It is the failure to understand that lies at the heart of the issue here. Neither side of this debate seems willing to understand why someone might like or dislike Tomb Raider‘s direction. Sensitive issues like the ones thrown up in this debate require empathy and an ability to appreciate where somebody’s argument is coming from — it’s a terrible shame, therefore, that sensitive issues like these are almost always surrounded by circular arguments borne from perceived slights, the desire to argue for an entire gender as if it’s one brainless entity, and a readiness to bite the head off of anybody that doesn’t think the same way they do.

At the end of the day, we have nothing but some clips and some hype to go off, yet so many people have merrily assumed the intent and the direction of the entire videogame. They’ve imagined the content, and either praised it or gotten mad by it. They’ve heard the counters to their arguments, and assumed the person making them is either a rape-loving beast or a histrionic girly-girl, when the issues at heart are more complex and deserve deeper thinking than that. You do the entire discussion an injustice when you fall into the trap of generalizing your opposition and going straight for your sharpest weaponry.

Tomb Raider is going to be one of the most controversial games ever released, and the arguments are going to get vicious. It saddens me that they will, because the core debate is so very fascinating to me, and we could all learn from it. I, for one, am listening to everybody, because everybody is right about it, and everybody is wrong.