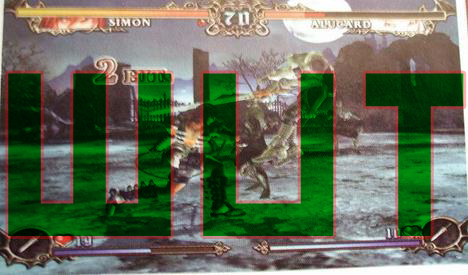 Last Thursday, our own Brad Nicholson broke the rumor that a new Castlevania fighting game titled Castlevania Judgment was announced in the latest issue of Nintendo Power, with pics to prove it courtesy of JeuxFrance. This morning, I managed to track down said issue of Nintendo Power, and I can confirm that this new Castlevania game, as well as Mega Man 9, are, in fact, the real deal. I can also confirm that there is more to “WUT” about over the game’s announcement than just the fact that it’s a fighting game.

Hit jump for my three big WUT moments in learning the details of Castlevania Judgment.

Castlevania Judgment will feature characters from games spanning the entire series, with Simon Belmont, Alucard, Maria Renard, Shanoa (from the forthcoming Castlevania: Order of Ecclesia for the NDS), and Dracula being the first to be confirmed. Thing is, they don’t look anything like they ever have before. All the character designs for Castlevania Judgment are by manga artist Takeshi Obata, and the results are jarring at best, disturbing at worst.

Dracula, adorned in a skin-tight gold one-piece leotard with six golden nipple-like protrusions on his chest, doesn’t fare much better. This is the least scary, most Liberace-like depiction of Dracula in the character’s hundeds of years in existance. At this point, Bram Stoker’s body must must be so dizzy from turning in its grave that it’s ready to vomit.

Maria looks a little less outrageous, with the only truly weird visual touches on her design being her enormous, exposed, Chun-Li-esque thighs, the random “X’s” all over her outfit, a giant wand with an owl in it…wait, this is pretty outrageous. Indeed, Maria’s new outfit maybe the very definition of “truly outrageous“. The only tie between the new Maria and the old is that they both wear pink. Beyond that, there is zero resemblance.

Don’t get me wrong, these character designs are technically very well done, and with all the boobage shown in most 3D fighting games, it’s only fair that fans of Beefcake get their turn to gawk. The thing is, an “All-star fighting game” with completely redesigned characters completely negates the purpose of the all-star experience. If I don’t recognize this Simon Belmont, this Dracula, and this Alucard as being the same guys I’ve seen in Castlevania games for years, why would I care about seeing them all together in the same game? With visual re-designs this drastic, they all become Castlevania characters in name only.

“In traditional Fighting games the timing of the moves needs to be very precise for them to work correctly. For Castlevania Judgement, we are making the controls more simple and the moves more dynamic, which we believe will translate into loads of fun for the user.”

So, the game will be an imprecise waggle-fest? Did that work for Soulcalibur Legends? Have imprecise controls ever worked to improve any game? When has any action game on the Wii benefited from tacked-on motion controls?

This “WUT” is really more of a “I thought I was done with you” frowny face of disappointment.  I had thought No More Heroes had showed developers how to do motion controls for action games on the Wii. Keep it simple, use the A and B buttons for most actions, and save the motion controls for dramatic finishing moves. Looks like Iga doesn’t agree, as all attacks in Castlevania Judgment will be done by swinging the Wii-remote.

Since Iga was first starting to be asked about the possibility of a Castlevania game on the Wii, he has consistently stated that he understands that motion controls in a Castlevania game wouldn’t work, as they would only make the game more tiresome. Does Iga think that just by making Castlevania Judgment a fighting game that this somehow makes tiresome motion controls OK? Would Super Smash Bros. Brawl have been as successful if its controls called for imprecision and exhausting waggle? I don’t think it takes a genius to answer that question.

More than all the other “WUTs” in this list, this last one may speak the most of my own glaring naïvete about the way 3rd parties think about the Wii, but it’s still the “WUT” that I exclaimed the loudest. The graphics for Castlevania Judgment, as shown in the new NP, look like a mid-gen PS2 game.

I am again reminded of Soulcalibur Legends, a game that completely failed to take advantage of the power of the Wii. Going by the few screenshots thus far made available, Castlevania Judgment and Soulcalibur Legends seem to be extremely similar in terms of visual detail. That’s not a good thing. Just loot at the pic below, which compares Soulcalibur Legends to the now last-gen Resident Evil 4. The difference between the two is nothing short of depressing.

I get the same feeling looking at the graphics for Soulcalibur Legends and Castlevania Judgment as I would looking at girl asking me out on a date whose teeth are coated in soft, yellow plaque. Looks aren’t everything, but seriously, if you’re not even trying to look your best (or even your medium-best), how can you expect me to want you? Visuals this uncared for send only one message: “I don’t care about myself.” This kind of laziness is un-befitting of the Castlevania name, and smacks of the kind of uninspired lack of love that eventually transformed Sonic the Hedgehog from an A-list franchise to gaming’s biggest laughingstock.

If Castlevania Judgment is fun, then I will love it. However, the decision to go in this direction with the series will forever leave me baffled. It’s understandable that Iga didn’t want to make another 2D, action/RPG-style Castlevania for the Wii this year, as such a title would go in direct competition with the upcoming DS Castlevania of the same genre. But an all-star, low-tech, 3D fighter featuring bondage-ified versions of the Castlevania cast? It just doesn’t compute. A 2D fighter, a 3D RPG, or even a completely idiotic mini-game collection would make more sense than this.

Does anyone out there understand what the hell is going on with Castlevania Judgment? Is this rant unwarranted? Or after learning the news of this game, were you also ready to make your own “Cats and Dogs” speech, ready to break into mass hysteria