There was once a time when playing Mortal Kombat II at the arcade all day was all I wanted out of a Friday. Whether it was at a crappy pizza joint, a rundown arcade on the seedy side of town, or Chuck E. Cheese, Mortal Kombat II ruled my life in the early ’90s.

As time went on, many challengers appeared, attempting to dethrone Midway’s brutal, yet campy, fighter. Clayfighters was an amusing rental, Primal Rage aimed at our obsession with Jurassic Park, and Killer Instinct‘s graphics were pretty impressive for the time. But then there were … the others.

In retrospect, all the Mortal Kombat clones have a way of blending together. All their parts blur into one imagined game designed in MS Paint, programmed in a meth-addled haze, and forged in the depths of hell before being unloaded into arcades across the nation. So, I decided to dig through the past and highlight the cream of the crap.

These are the worst Mortal Kombat clones of all time. 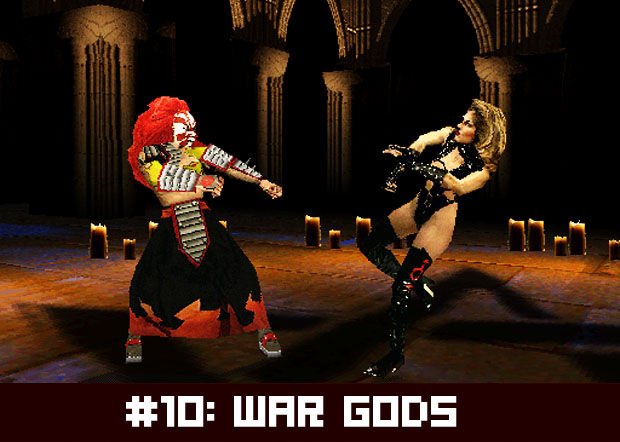 Perhaps I’m bias. Back in ’96, my local movie theater replaced its Ultimate Mortal Kombat 3 cabinet with War Gods and I was crushed by this poor, poor replacement.

Midway developed War Gods as a testing ground for the then yet-to-be-released Mortal Kombat 4. By featuring characters nobody liked, adding sidestepping and transitioning from 2D to lackluster 3D, it prepared everyone for the disappointing Mortal Kombat 4 that would arrive in arcades the following year.

Between Warhead (a radioactive super-soldier who shoots missiles out of his chest) and Voodoo the witch doctor, the game’s cast of characters was as random as it was lame.

C’mon, man, NO ONE wants to be Kabuki Jo! 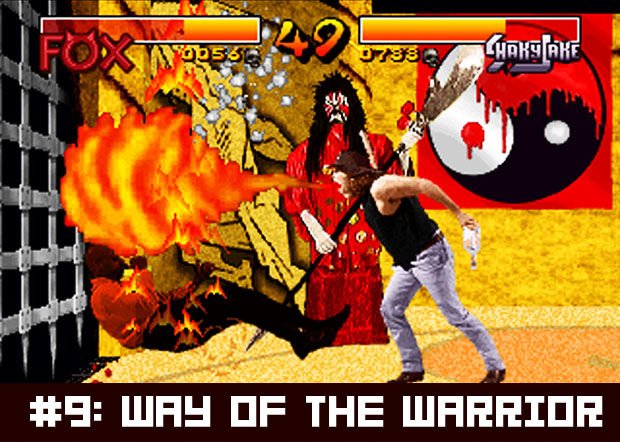 Before Crash Bandicoot, Jak and Daxter and Uncharted, there was … Way of the Warrior?

Now, Naughty Dog is one of Sony’s best developers, but their terrible 3DO fighting game is not easily forgotten by those who played it. In the midst of bankruptcy, Naughty Dog — who, at the time, were really just current studio heads Jason Rubin and Andrew Gavin — scrambled to piece together this game with whatever they could afford. Turned out they couldn’t afford much.

Friends played the roles of the fighters, costumes were made on the fly, and all the character footage was filmed in Rubin’s apartment. It’s kind of endearing that  these things came together and led the company to its breakthrough deal with Sony two years later. Then again, the game isn’t listed on Naughty Dog’s site for a reason. 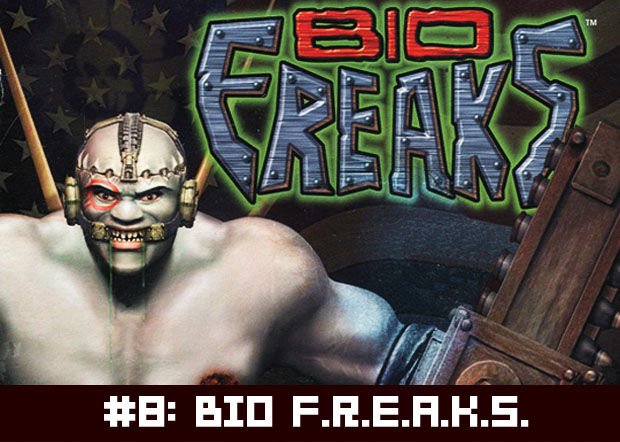 Bio F.R.E.A.K.S. didn’t take bad Mortal Kombat clones to new lows as much as it embodied everything wrong with the fighting genre in the late-90s: terrible controls, an embarrassing story (“Neo-Amerika” — really?) and stupid gimmicks galore, including a button for flying and a button for shooting a projectile.

Throw all of this together in one of the least appealing worlds and cast of characters to grace any fighting game, and you have one of the main reasons no one cared about the genre after Mortal Kombat 4 (which this game borrows plenty from). And, no, I really don’t have a clue what “F.R.E.A.K.S.” is an acronym for. Freaky Rectal Enemy Aggressors Kill Shit? 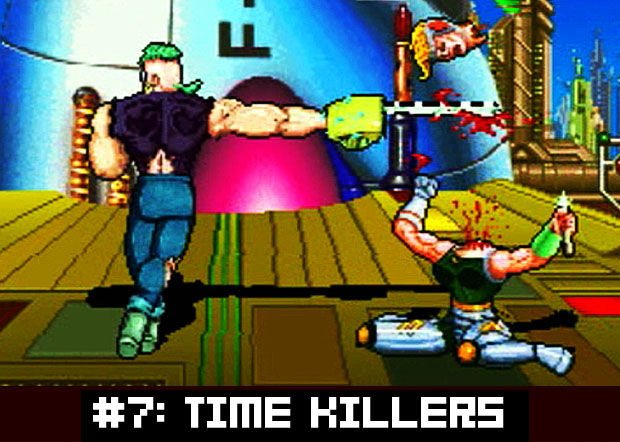 In Time Killers, you have a button for headbutting. What’s even crazier is that you can have your head chopped off, rendering the button useless.

Time Killers tried to capitalize on the Mortal Kombat craze by adding more ridiculous violence to the mix. Not only were the fatalities brutal, but every match ended in a fountain of blood pouring out from the defeated.

What caught most people’s attention, however, is the ability to tear opponents’ limbs off. You can even cut an opponent in half, leaving them to fight on the ground from the waist up. At the time, Time Killers’ violence seemed exciting but, in retrospect, it is cheap and exploitive – as if the developers assumed gore is enough to outshine the tight controls and depth of MKII. 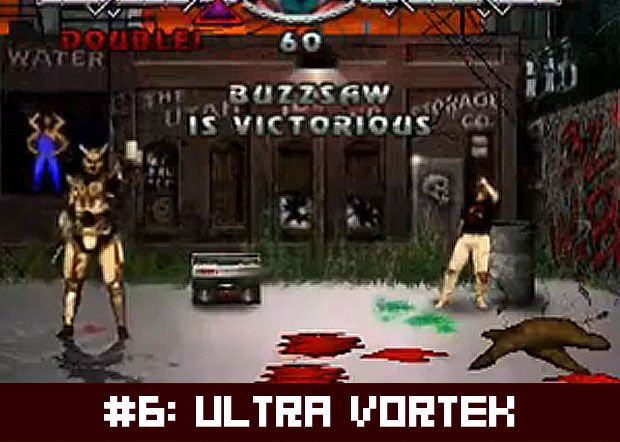 Fatalities mostly conjure up memories of Mortal Kombat, despite becoming a mechanic used in many fighting games over the years. You can’t blame developers for trying, but Ultra Vortek tried a bit too hard with the inclusion of Poopalities.

Not only can you summon farts of fire mid-match, but you can also turn your opponent into a giant turd at the end.

The stereotypical Jamaican character Dreadloc also deserves a special mention for his gnarly dreads and special move where he blows a puff of weed smoke at an opponent. 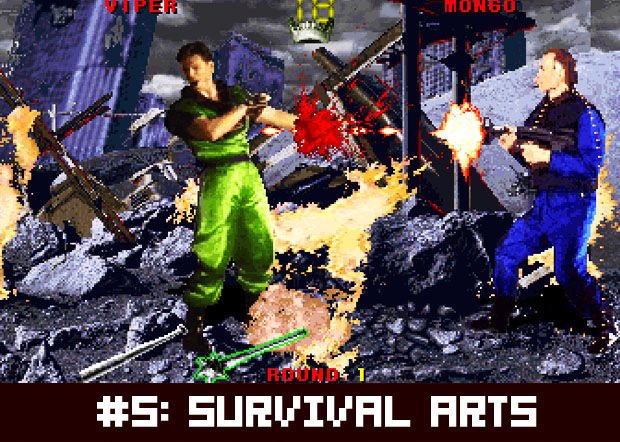 Combine Mortal Kombat, Street Fighter II and a fever dream and you get Survival Arts.

The game feels like it was made without the developer (Scarab) having played any fighting games. Perhaps they were forced to make Survival Arts after investors noticed the popularity of fighting games and immediately demanded Scarab enter the market.

Characters take up half the screen, animation is choppy, fighters only have one or two moves, and the game has the most half-assed fatalities — you do a regular special move at the end of a match, which magically decapitates your enemy, sending intestines and organs flying across the screen.

What really gets the game so high on this list is the A.I. that plays like your annoying 8-year-old cousin: constantly spamming the same damn special move from across the screen until you give up in a fit of rage. 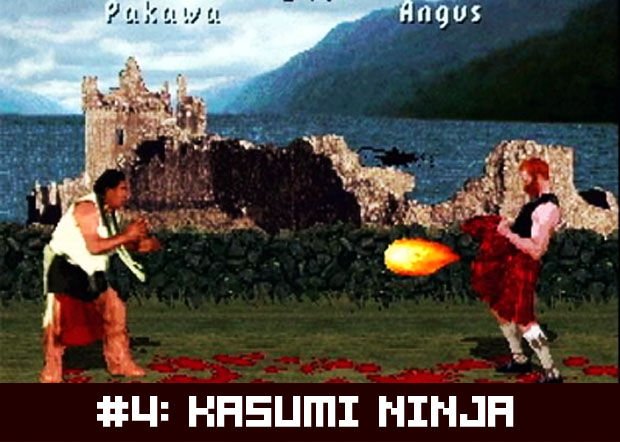 It’s hard for a rushed Mortal Kombat clone to get attention in the mid-’90s, but Atari Jaguar fighter Kasumi Ninja had a couple things going for it: It was one of the few fighters for the system; it had a bizarre character selection method where you chose your character by walking up to a statue in first person.

But, above all, it had Angus McGreggor: A Scotsman who shot fireballs from under his kilt and headbutts your head off your body. Forget Ken, Ryu, Sub-Zero and Scorpion. It’s all about Angus McGreggor! 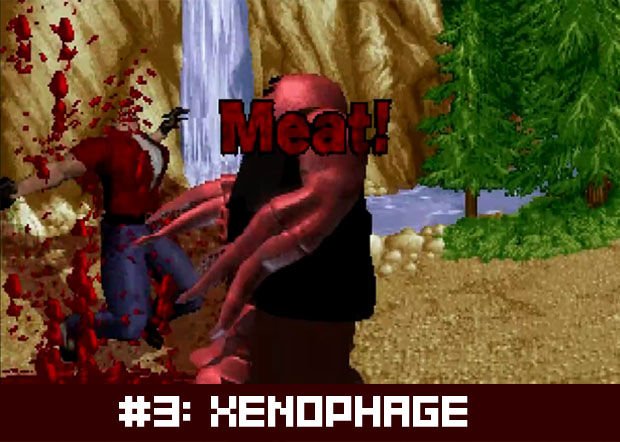 Xenophage is offensive for all the wrong reasons. The game visually and aurally assaults you without end. Loud, high pitched music makes your ears bleed, while the horribly-designed characters on-screen elicit a sense of nausea.

If I had the time, I’d take that scene from A Clockwork Orange — you know, the one where Alex has his eyes forced open, focused on a montage of violence — and put footage of Xenophage in the montage’s place.

The game feels like a bad acid trip. Once Barney shows up, there is no turning back. 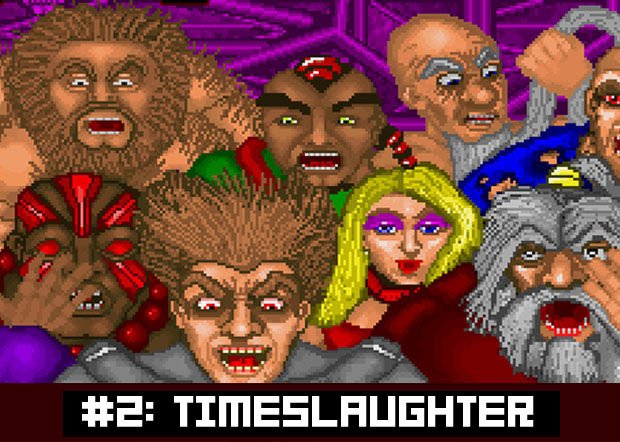 The game looks like it was made by two angst-ridden teenagers who delved into their Mortal Kombat fantasies between classes. Oh, wait! That’s actually not far from the truth. The two high school friends that made up the game’s development team, Bloodlust Software, went on to create the popular Genesis and NES emulators (Genecyst and NESticle), and eventually teamed up to make games for indie film studio Troma Entertainment.

The two teenagers eventually went on to work for two of the biggest, most successful developers out there (Ubisoft and Electronic Arts), according to YouTube user who is married to a developer of the game. The developer announced a sequel to Timeslaughter in 2005, but there haven’t been any updates since. 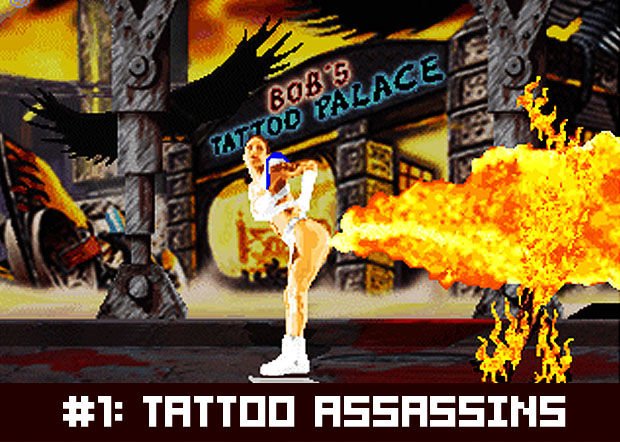 Tattoo Assassins seems like an elaborate joke. Dreamed up by Back to the Future screenwriter Bob Gale and never officially released, this is a clone that knows no limits. Not only does it follow in MK’s footsteps in every conceivable way, it puts the absurd fatalities, characters, and production values of the other games on this list to shame.

Tattoo Assassin‘s opening screen claims the game has 2,196 fatalities. And each fatality is completely ridiculous. Turn enemies into evil pussycats, shit out plates of roasted turkey that knock you and your opponent down on contact, drop a Delorean on an opponent’s head, morph characters into geishas, and set enemies ablaze with a stream of fire coming out of your ass.

There are also sets of Animalities, Power Fatalities and Nudalities (made in response to rumors of “Sexualities” and “Fuckalities” hidden away in Mortal Kombat II.) Then there are some finishers that defy explanation.

The game and its story are baffling, to say the least. A stripper out for revenge, a kung-fu rock star and a half-human, half-rhino monstrosity are some of the characters you can look forward to seeing if you ever seek this game out. (Join its Facebook page while you’re at it!)

Even though the game was never released, press were given copies for preview that have since leaked online.

If you still don’t believe how bad this game is, here is some commentary from a programmer who worked on the game: “We knew the game was crap, and that we were no longer capable of fixing it […] We resisted violently any attempt to change the game to make it better, because that would mean we would be working on it longer […] One programmer stopped working almost entirely in the hopes of getting fired.”

What do you think? Did any of you ever spend time with these games at the arcade? Are there any other terrible MK clones you would add to the list?

While you seek out these atrocities and go through the pain I’ve been through this past week, I’m going to go and play a REAL fighting game. Like the new Mortal Kombat … or whatever the hell this thing is.