I love making lists. Short lists, long lists, red lists, blue lists. But in all the years I have been writing for Destructoid, I have never made a list of my ten favorite videogame robots. For a site with a robot as a mascot.

But don’t panic! I am here to remedy this dire situation with a list of the ten best videogame robots EVER!

It’s funny because I am typing like a robot! 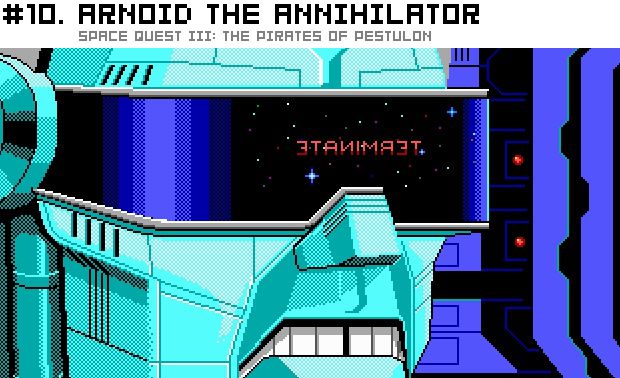 I was terrified of Arnoid the Annihilator when I first played Space Quest III back in the day. In the game, Terminator-inspired robot Arnoid (get it? Arnoid?) stalks main character Roger Wilco to collect payment for a “free” Labion Terror Beast Mating Whistle he picked up back in Space Quest II.

The way Arnoid continuously stalks Roger as he runs from him on planet Phleebhut is the stuff of gaming nightmares. The experience is very similar to that of the nail-biting Phanto chases in Super Mario Bros. 2, but with much more metallic testosterone.

Honestly, Arnoid may have just made this list in fear of his visiting me in my sleep if he didn’t make the final cut. 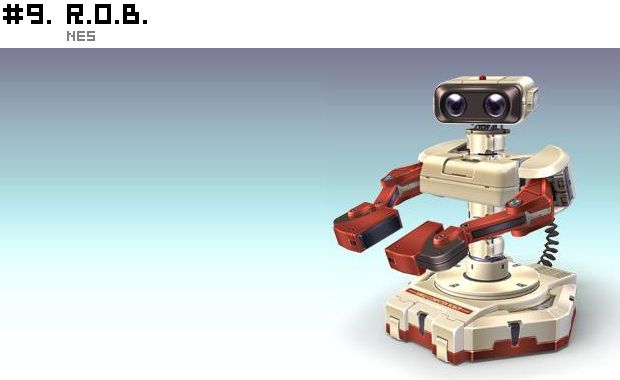 Who doesn’t love R.O.B.? The Robotic Operating Buddy is so adorable and a welcome addition to any ’80s child with a brand new Nintendo Entertainment System. I mean, he is completely useful and would never end up taking up space in the back of closets everywhere.

Oh, who am I kidding? R.O.B. is ridiculous. He may be super cute in that WALL-E kind of way, but he is one of the strangest, most ignored peripherals in the history of videogames.

But I love fighting with him in Super Smash Bros. Brawl! Love it! He had to make the list for that reason alone. 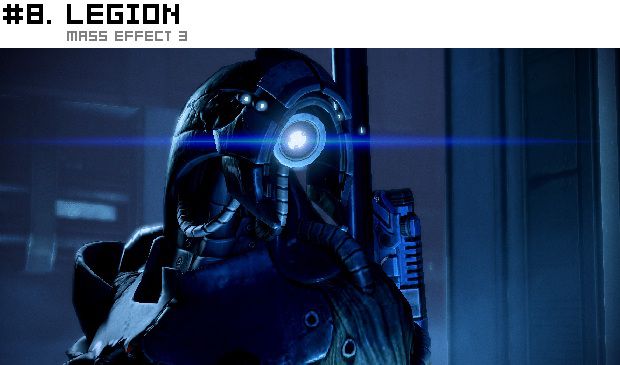 All the super Mass Effect fans out there may tell me that Legion is not technically a robot. He is a geth, which is a form of synthetic intelligence, but the complicated and remarkably deep history of the Mass Effect universe may not exactly define him as a robot. Fair enough.

But to me, he is made of metal, has a light for a face, and speaks with a digitized voice. As a guy who grew up watching Short Circuit and Screech’s robot Kevin from Saved by the Bell, Legion sounds like a robot to me!

Regardless of what he is, if you made certain decisions throughout Mass Effect 2 and 3, Legion eventually sacrifices himself to save the lives of his supposed enemies the quarians. It is a surprisingly emotional scene and one of my favorites in the entire Mass Effect series. 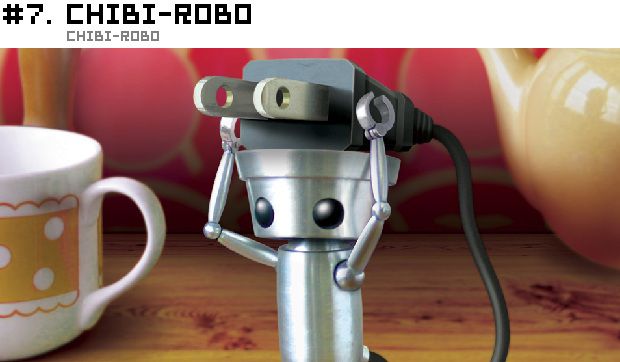 I have always wanted a pet robot, but not one of the scary kinds that will eventually grow smart enough to kill me. More of the variety that will bring me a bag of Combos when I really want one and switch the input on my television from “Wii” to “Xbox 360” when I am too lazy to walk over and grab the remote.*

And Chibi-Robo fits the bill perfectly. He is cute and unintimidating and was actually created to help with chores! 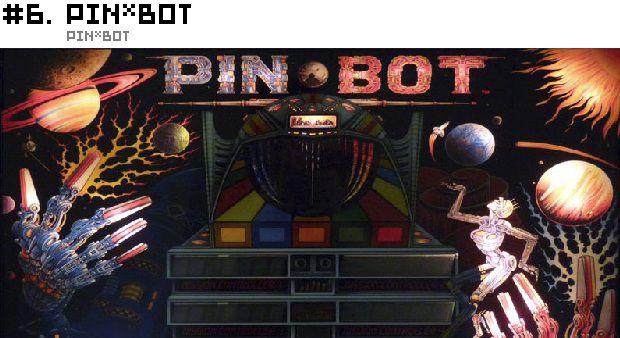 Before anyone cries foul over pinball not being a videogame, please see Exhibit A. For me, though, anything found in an arcade can be categorized under the broad “videogame” umbrella. Yup, even skee ball.

(Okay, fine, I just want to justify my idea for an amazing skee ball article I have in the works …)

Using this irrational bit of reasoning, nothing can top the awesomeness of Pin*Bot, the greatest pinball-themed robot of all time. Sporting a sleek, super ’80s helmet, Pin*Bot has no problem yelling at you when you are doing poorly and then rewarding you with multiball when you are doing well.

And if you ask me, there is no greater reward than multiball. Not even dolphin hugs! Okay, maybe it is second only to dolphin hugs. 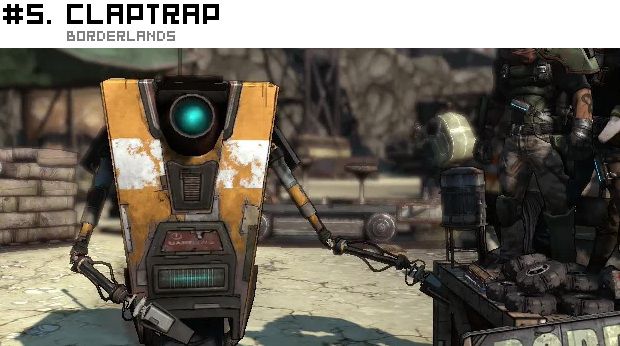 I have a confession: I have never played Borderlands. I know, I know. I am so sorry! But it has nothing to do with my lack of interest. I will get to it … eventually. I just was unbelievably busy when the game was released, and it inexplicably fell to the bottom of my “Games to Play list.

Despite how terrible I am for having never played the game (YET!), I still know the greatness of the Claptraps. Equal parts hysterical and helpful, the Claptraps are some of the best robotic creations in the last decade … or so I have heard from pretty much everyone who has ever played Borderlands.

One thing I do know? They help people propose to their real-life significant others, which is just plain awesome. 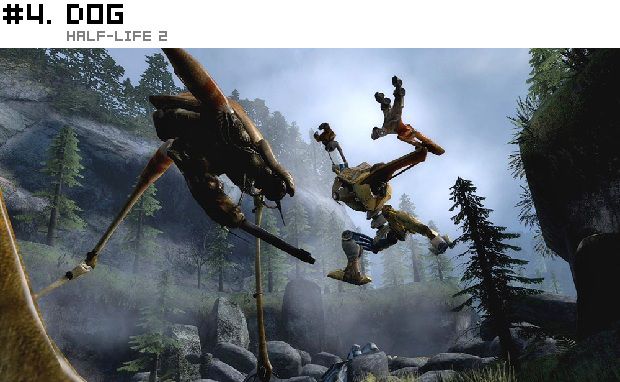 When I first encountered Alyx Vance’s robot pet DØG in Half-Life 2, I instantly fell in love. Not only is DØG friendly and unbelievably loyal (just like a real dog!), he (she?) saves main character Gordon Freeman’s life more times than I can count. (See above pic for one of the best, most badass examples of this.)

By the time the heartbreaking last scene of Half-Life 2: Episode 2 rolled around, I was already filling out imaginary adoption papers so I could take DØG home and play inert Combine Rollermine fetch with him.

As irrational and ridiculous as that sounds, I am not ashamed. I love that robotic pup. 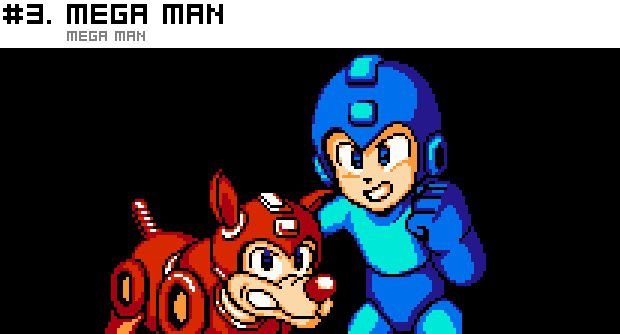 Whether he is dramatically standing on the top of a tall building or jumping through boss doors, Mega Man will always be known as one of the greatest man-made creations ever. Sure, the Great Pyramid of Giza is considered one of the Seven Wonders of the Ancient World … but does this so-called “great” pyramid have an arm cannon or cool robotic dog companion? 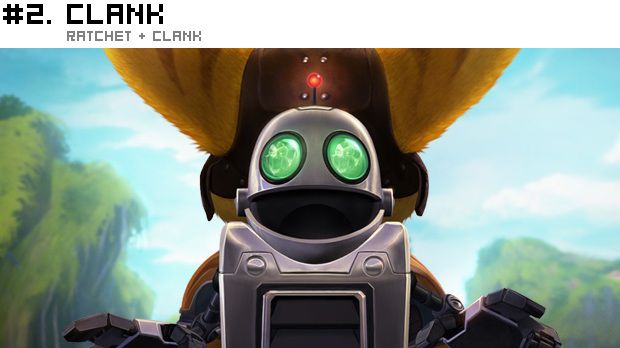 Clank is the best backpack of all time!

Sure, calling him a “backpack” might be unfair, but that’s what makes Clank so great — he wouldn’t even care if you did call him a “backpack.” He is so sweet and funny and nice that all the loyal robot sidekick cares about is helping his good buddy Ratchet.

And that laugh. My God, Clank’s laugh is infectious. 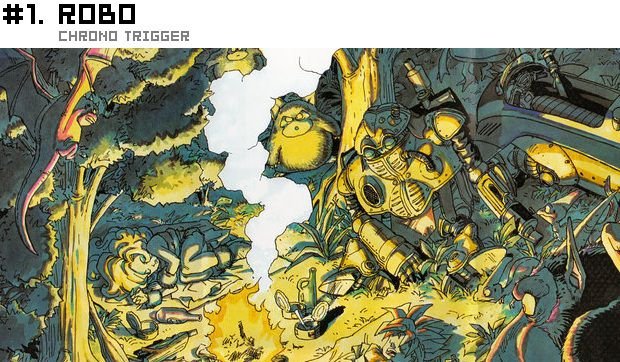 There is a scene in the Super Nintendo masterpiece Chrono Trigger where Robo, a friendly robot and newly added member of your party, is helping Crono and friends escape from a futuristic factory.

Before exiting, Robo meets up with a group of his “friends,” fellow robots who were created in the same factory as him. Instead of embracing him, the robots see Robo as an enemy and beat him within an inch of his mechanical life.

The scene is brutal, heartbreaking, and one of the most emotionally powerful scenes I have ever witnessed in a videogame. After viewing it, I knew it would be a moment I would never forget.

All these years later, I still feel a connection to Robo. He is and always will be my favorite videogame robot of all time.

And now for a list of runners-up! These robots are pretty darn great, but just missed out on the final cut:

What do you think? Do you agree with this list? There are a lot of awesome robots in videogames, but which ones are your favorites? And really, are any of these robots even close to as cool as Mr. Destructoid?