This year marks the 25th anniversary of the Sam & Max series. It was 1987 when the very first Sam & Max comic was released, inspiring one of the greatest and most charming adventure game series ever.

Everyone is celebrating this exciting milestone! Telltale is celebrating with a major Steam sale on Sam & Max games this weekend! Original creator Steve Purcell is celebrating by continually being awesome! And now it’s time for Destructoid to join in the celebration. And what better way to celebrate the greatness of Sam & Max than with a themed top ten list?! THEMED TOP TEN LISTS ARE THE GREATEST GIFTS OF ALL!

Since Sam and Max are some of the most memorable detectives ever, there is no more logical choice than a list of the ten best videogame detectives of all time.

Enjoy this fine gift, Sam and Max. And, no, I don’t have the receipt. 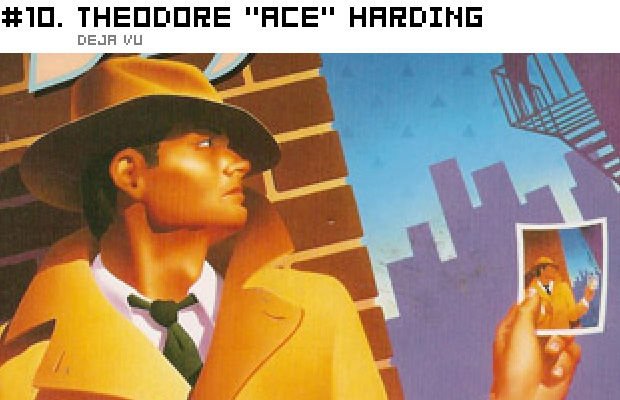 One of the best in the bunch is Déjà Vu, a surprisingly dark and challenging adventure that follows around Ace Harding as he tries to solve the mystery of who he is and why he is being accused of murder.

Players never get to see the main character since the game is entirely in first-person, but if the box art is any indication, Ace is one slick (and narcissistic!) detective. 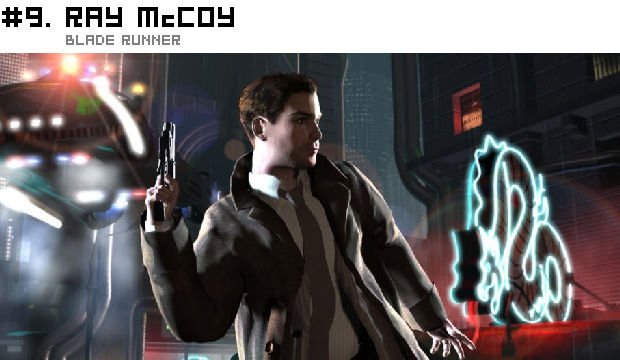 One of the most underrated and sadly forgotten PC games of all time is Blade Runner. The game is gorgeous, moody, and a perfect extension of Ridley Scott’s original science fiction universe.

In the graphic adventure game, you play as Roy McCoy, a gritty, hardened detective who, like Deckard in the film, is assigned to track down a group of potentially dangerous replicants.

If you haven’t played Blade Runner, track it down. It’s a real gem.

Trench coat review: Disappointing. You would think a trench coat from the future would have some glowing TRON lights on it or something. Or at least a less frumpy silhouette. Grade: C 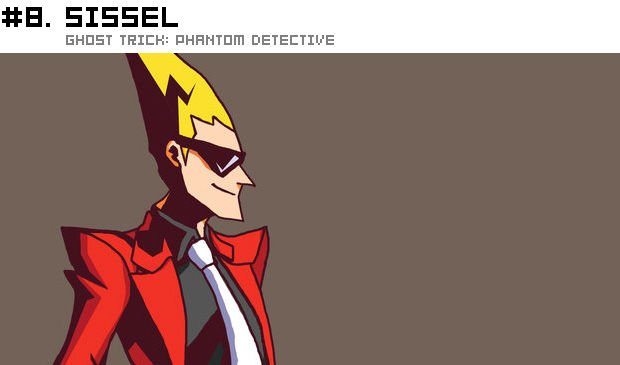 Sissel is not technically a detective, as much as a [SPOILER] coming back to [SPOILER] his [SPOILER]. But I love him (and Ghost Trick!) so much that he had to make this list.

Plus, he is a phantom detective, which is inherently cooler than a regular detective.

Trench coat review: The stark red is unconventional and super fashion-forward. Grade: A 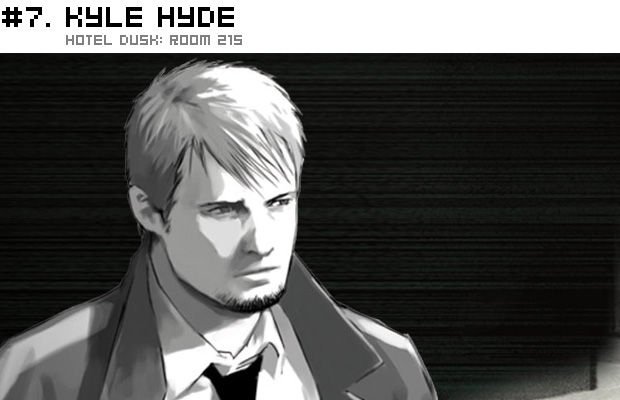 I love Hotel Dusk on the Nintendo DS. I really do. It is one of the most interesting and original games on the handheld. But, man, is it depressing. The sad story, gloomy environments, and morose characters, combined with the black and white art, make for one downer of an adventure. A pretty great adventure, don’t get me wrong, but one that takes itself very seriously.

Main character Kyle Hyde is just as serious. But he has a right to be! When he was a child, his father was killed. Years later, when he became a detective, his partner betrayed him and sold inside information to some bad people. So Kyle shot him. And then the body disappeared, leading Kyle to the mysterious Hotel Dusk, where some really crazy things happen.

He’s had a tough life. Time for someone to get a puppy!

Trench coat review: As disjointed and messy as the inner-workings of Kyle’s tormented mind. Grade: C+ 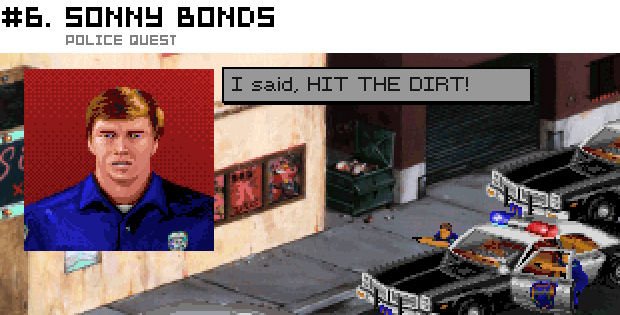 Sonny Bonds, main character from the classic Police Quest series, starts off as a simple traffic cop, but eventually (and rather quickly) works his way up to narcotics detective,  tracking down a homicidal drug dealer and saving his girlfriend’s life in the process.

He is also constantly ridiculed in the game by his superiors, called a “pig” by every rowdy citizen he meets, and dies — yes, actually dies — if he tries to walk out of the police station locker room naked.

Not that I tried that or anything.

Trench coat review: What Sonny Bonds lacks in trench coat, he makes up for in one beautiful head of hair. Grade: N/A 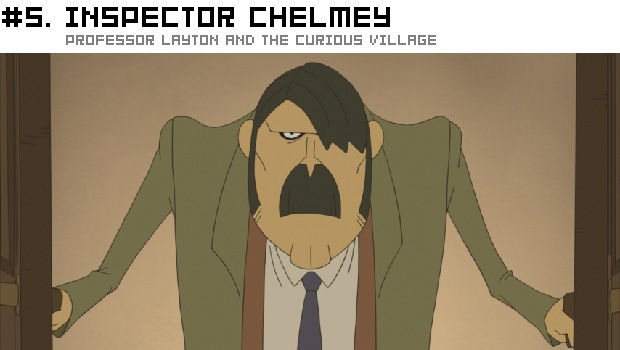 Oh, Inspector Chelmey, you are such a bumbling, endearing detective. While you are trying to solve mysteries, Layton and Luke are rearranging matchsticks, sliding around blocks, untangling rope, and still end up beating you to the end goal. 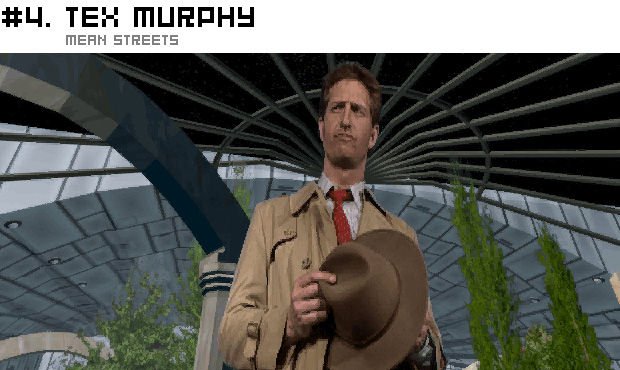 Tex Murphy is a private investigator and star of a series of adventure games in the ‘80s and ‘90s. Well, “interactive movies” would be the better way to describe them, as they feature real-life actors playing the parts of all the characters. In fact, Chris Jones, the actual designer of the game, plays Tex Murphy himself. How awesome is that?!

I think this whole concept needs to make a comeback. Can you imagine Cliff Bleszinski as the star of Gears of War? Or Miyamoto with a flower on his head as the mysterious and feared Pikmin King? Classic.

If you are wondering why Tex Murphy is so great, just watch this hardboiled trailer for The Pandora Directive and bask in all its glory.

“Where the line blurs between loyalty … and desire.”

Trench coat review: Well, it’s a trench coat! It also looks like something my dad wore to a Halloween party when I was a kid. Grade: D 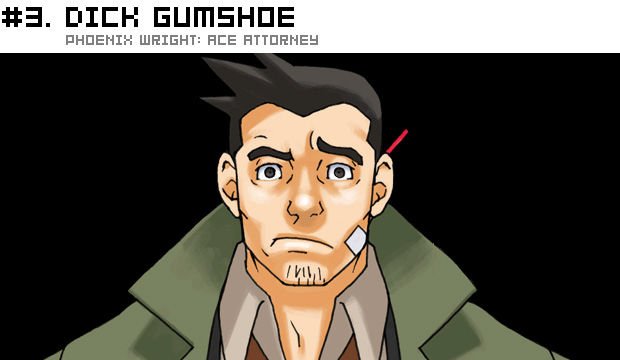 Fan favorite detective Dick Gumshoe from the Phoenix Wright games may not be the brightest bulb in the box, but he is such a loyal and lovable guy that you can’t help but love him. 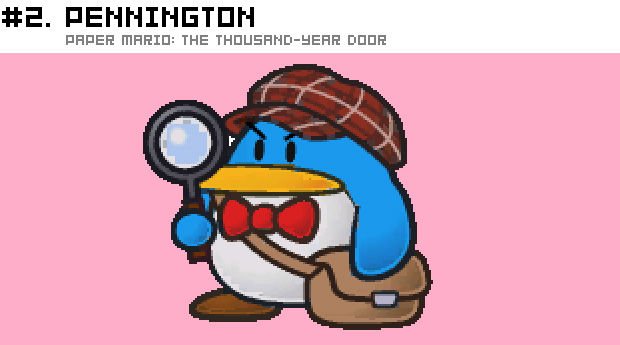 Pennington is a penguin detective from awesome GameCube RPG Paper Mario: The Thousand-Year Door. And he has a magnifying glass and a cute little hat.

Now, I am often accused of overusing hyperbolic, all-caps statements, but, seriously, HE IS A PENGUIN DETECTIVE! LOOK HOW ADORABLE HE IS!

Trench coat review: His flippers wouldn’t fit through a trench coat, but look at that bow tie. And his little messenger bag! AND THAT HAT! MY GOD HERE I GO AGAIN! Grade: A+ 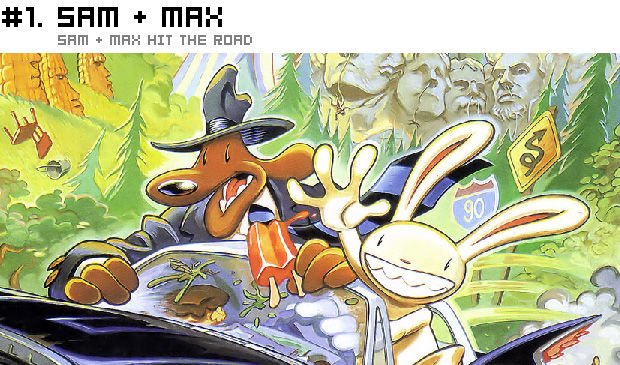 To not put Sam and Max as the number one detectives on a list dedicated to them would just be cruel. Luckily, they actually earn this spot by being two of the most memorable videogame characters of all time.

Sam may be the one that does all the crime-solving, but Max is there to … well, Max just likes to do terrible things to everyone he meets. But he is hilarious. And that makes everything okay.

Since there are so many great videogame detectives (and almost all from adventure games, weirdly enough), here is a list of characters that almost made the final cut. 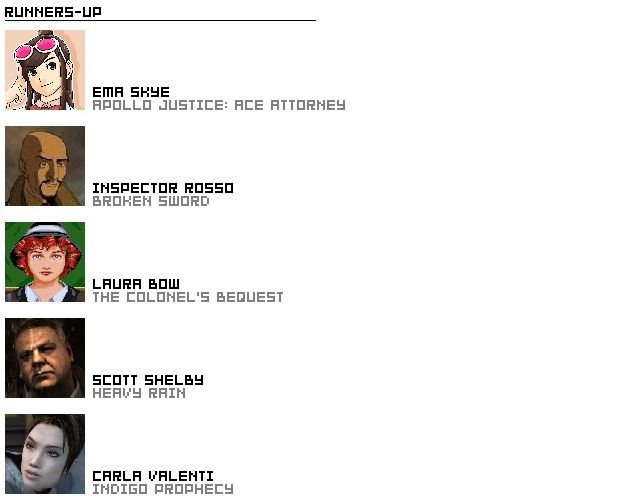 What do you think? Do you agree with my picks for the best videogame detectives of all time? Are you a fan of the Sam & Max adventure games? And, seriously, what is up with all the trench coats? I understand they are detectives, but sheesh!