If videogames were like Three’s Company — with the main game being Jack Tripper — I would say mini-games are like Janet. They are a part of the main game and sometimes even make the main game more fun, but in the end are forgotten about and never stand out as the star.

But why is this? There have been many incredible mini-games over the year. Admittedly, some are forgettable diversions, but others are either woven so perfectly into the main game or stand out as exceptional alternatives to a game’s main focus that they create experiences a player will never forget! Even though there are a lot of people who adore these above average mini-games, for some reason they never get the accolades they deserve. Well, not anymore, gosh darnit!

I say: Stand up for yourself, Joyce DeWitt mini-games! You deserve better than this! In fact, a lot of times you are so addictive and so entertaining that you are even better than the main game that gets all the attention! Hold your head up high! 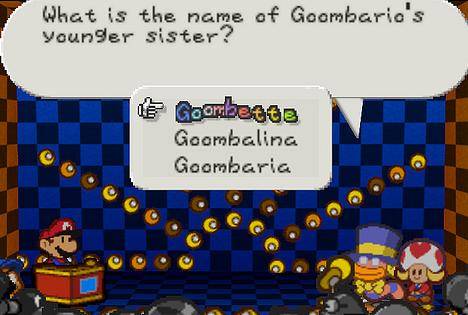 As Mario travels through all the towns in the incredible Paper Mario for the Nintendo 64, a mysterious character named Chuck Quizmo appears from time to time. By talking to him, Mario takes part in a quiz show and is required to answer questions about the very videogame he is taking part in. If he answers the question correctly, Mario is rewarded with a very valuable star piece.

Why I <3 it: I have always been a stickler for quiz shows in videogames and the Chuck Quizmo mini-games are the perfect level of challenge. Some of the questions are difficult, but not hard enough to make you want to pull out your hair. 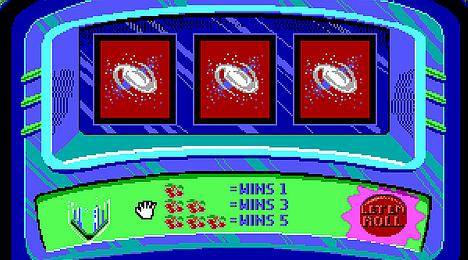 Once main character Roger Wilco gets to the small desert outpost of Ulence Flats he is tasked with collecting enough money to buy a ship to escape the barren planet he is stranded on. Playing the slot machine in the game is addictive, but what makes it extra cool is the unexpected risk of death while playing. Sure, you can go broke and are forced to restore an older game, but if you ever lose (by matching the wrong symbols), a laser beam comes out and burns poor Roger Wilco to a crisp. If only real slot machines posed as much a risk …

Why I <3 it: Yeah, there are probably a million more advanced slot machine mini-games that have come out since, but Space Quest was my first (and still my favorite) experience with the classic game of chance. 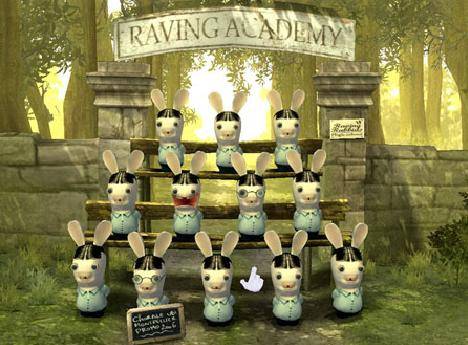 Rayman Raving Rabbids is composed of all mini-games, but one of the highlights has to be Bunnies Can’t Sing. In the mini-game, players must find which one of the terrible rabbid choir singers is the least in tune and, literally, slap them across the face with the Wiimote to get them back on track.

Why I <3 it: Out of all of the mini-games on this list, Bunnies Can’t Sing is easily the funniest. Honestly, there is nothing more hilarious than slapping a crazy singing rabbit in the face. Well, I guess if that crazy singing rabbit also got kicked in the nuts it might be just a little bit funnier.

7. Fishing (The Legend of Zelda: Ocarina of Time) 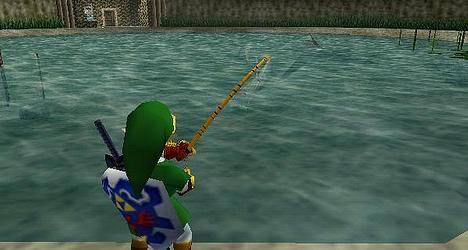 The Legend of Zelda: Ocarina of Time is one of the greatest games ever created (if not, the greatest) made even greater by its addictive fishing mini-game. Early on — while visiting Lake Hylia — Link stumbles upon a small fishing pond. After borrowing a fishing pole from the pond’s caretaker, Link is able to catch different size fish to exchange for various prizes.

Why I <3 it: It’s crazy to think that a seemingly simple fishing mini-game found in a game as epic as Ocarina of Time could be this good … but it is. While sequels like Twilight Princess have tried to improve and expand on this classic mini-game, nothing can top the charm and addictiveness of the incredible original. Do you remember the first time you caught the biggest fish in the pond and were rewarded a heart piece? It was one of the most satisfying things ever, wasn’t it? 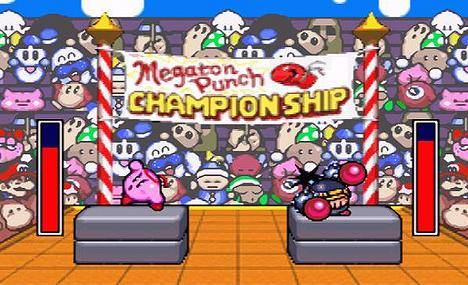 There is a lot to do in Kirby Super Star, including a handful of pretty exceptional mini-games. While it seems almost laughably simple — players only have to perform the same timed button press three times in a row — Megaton Punch will always be remembered as one of the most addictive mini-games of all time.

Why I <3 it: At the end of this past year’s GDC, a bunch of editors and community members went over to fellow editor Dyson’s apartment to play videogames. Even though we were surrounded by a huge selection of every kind of game imaginable, we played Megaton Punch for hours. Hours. If that isn’t proof how great this mini-game is I don’t know what is.

Also, seeing little Kirby punch the ground hard enough to crack a star in half is one of the coolest things you will ever witness. 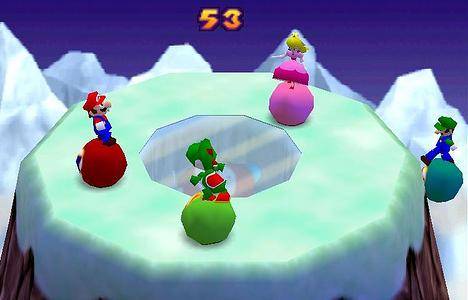 The seemingly endless Mario Party series is full of many different mini-games. In Bumper Balls — featured in the original Nintendo 64 game — up to four players ride on top of colored balls as they move around the screen trying to knock their opponents off the edge of a raised platform. Let the chaos and screaming at your friends ensue!

Why I <3 it: I could get into the details of why the physics and controls in Bumper Balls feel so perfect that it really adds to the overall enjoyment of the mini-game, but, honestly, that is only a small part of it. Sitting around with three (easily aggravated) friends as you fight for ball supremacy is one of the most fun experiences ever and proves why online gaming will never be as fun as a room full of beer, buddies, and Mario Party. 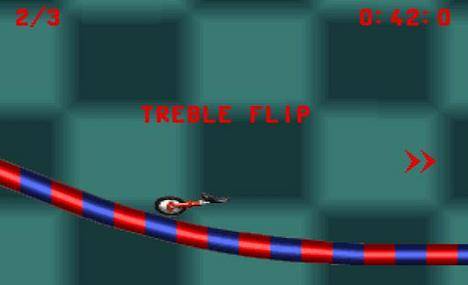 Since I don’t get to write about it very often, I am going to use this opportunity to talk about how Uniracers is one of the most underrated, incredible games ever created. Even though racing independently powered unicycles around obstacle-filled side-scrolling tracks sounds kind of weird, Uniracers is one of the best designed and most fun videogames for the Super Nintendo. One of the main draws outside the awesome racing circuit is the ability to perform numerous tricks on stunt tracks to rack up points.

Why I <3 it: Uniracers is a side-scrolling racing game, meaning you can only go forward, backward, or jump. Why that sounds strange for a racing game, it is because of this that the stunt track is so much fun. Instead of having to worry about dodging obstacles, the stunt tracks in Uniracers let you simply roll your unicycle back and forth along a giant half-pipe and perform as many tricks as possible, ranging from basic flips to complicated twists. Even better, the skills you master on the stunt track can help you gain extra speed in the main game. Can we please see this on the Virtual Console soon, Nintendo?

As Kid Ying and Dr. Yang travel through the various villages in Legend of the Mystical Ninja, they can visit random buildings and take part in a wide variety or random mini-games. One of these mini-games is called Paint. If you are familiar with the classic game Snake you will easily understand Paint. In the mini-game, two players have to paint a wall using brushes that are constantly moving forward. Whoever can avoid the paint trails left behind by the brushes the longest is the winner!

Why I <3 it: Man, talk about bringing back memories. Unfortunately, Paint costs money to play in the game. Instead of using my in-game funds to buy important (and almost necessary) things like armor and food, I would spend every coin earned on multiple games of Paint. To this day I will still pop in Mystical Ninja for a few more rounds of the ridiculously simple — but hopelessly addictive — mini-game. 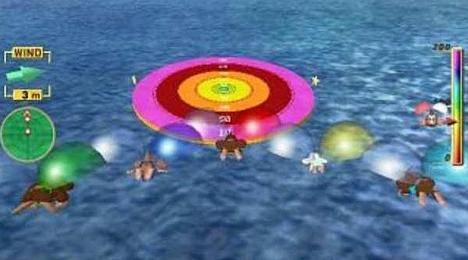 Have you ever wanted to roll a monkey in a ball down a giant ramp, launch him in the air, and watch him as he uses his ball as a glider to land on targets worth different amounts of points? Well, if you have, Monkey Target is the mini-game for you!

Why I <3 it: God, Monkey Target was this close to being #1. I don’t have to explain how addictive and fun this game is to anyone that has played it, but I will try my best to convince you few out there that have yet to experience its greatness.

First of all, you can play with up to four players at the same time. Secondly, the flying mechanic is actually surprisingly deep and hard to master. But the best part about Monkey Target is when you stick an amazing landing on a 500 point target, only to have your friend drop down from the heavens and knock you and your poor monkey ball off the target and into the dark water below. If you don’t waste hours at a time playing Monkey Target something is seriously wrong with you. 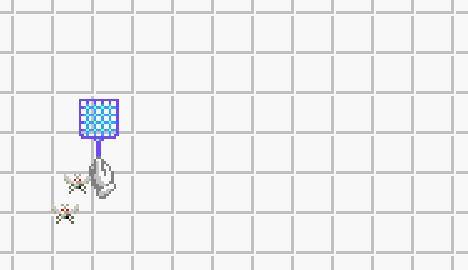 Mario Paint by itself is a great, revolutionary game that comes packaged with one of the best controllers of all time: the Super Nintendo mouse! However, hidden inside this timeless masterpiece is a surprising and refreshingly creative mini-game called Gnat Attack. Using the mouse, players literally swat flies (or gnats, I guess) through increasingly challenging levels, even fighting giant boss insects along the way.

Why I <3 it: What is there to say about Gnat Attack? IT IS THE GREATEST MINI-GAME OF ALL TIME BECAUSE YOU GET TO SWAT FLIES USING A MOUSE ON THE SUPER NINTENDO! Honestly, that is pretty much it.

Even though there are a solid handful of mini-games on this list that could be released as stand alone games, Gnat Attack is the one I think the most people would buy. Seriously, call my bluff, Nintendo. I can guarantee you if you released a Wiimote-controlled sequel to this on WiiWare it would sell millions. And people would love it.

Now that you have read the list, please let me know what you think. Do you agree? Disagree? What mini-games are you surprised didn’t make the cut? Are there any that you think placed to high? Mini-game discussion … GO!