Epic Mickey for the Wii hits store shelves today and I couldn’t be more excited! Sure, reviews have been mixed, but as a huge, gigantic, supercalifragilisticexpialidocious Disney fan, the idea of playing anything Disney-related (let alone AS MICKEY MOUSE HIMSELF!) always makes me happy.

To celebrate this anticipated release — and to give me an excuse to type this while listening to the soundtrack to Aladdin — I thought it would be fun to put together a list of my ten favorite Disney games of all time.

And, boy, what a fun time it was. Looking back at all these games over the years made me realize: there are a lot of great Disney videogames! But, from this deep and surprisingly varied pool of choices, which ones are my favorite? Hit the jump for my picks for the ten best Disney games ever made! 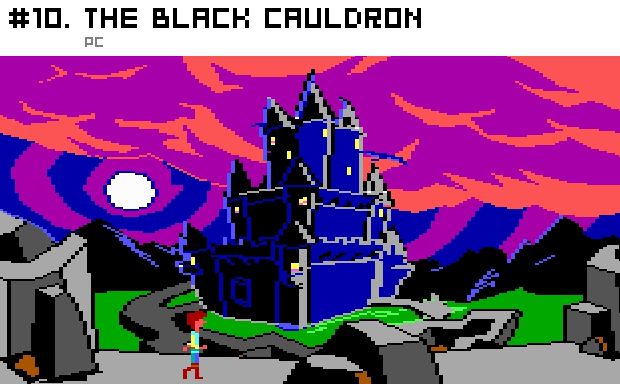 Back in the mid-1980s, a couple years after the first widely-acclaimed King’s Quest adventure game was released, developer Sierra decided to do something a little different. The company turned to Al Lowe (the eventual creator of the famed Leisure Suit Larry series) to design a graphic adventure game based on the failed (but not forgotten) Disney animated film The Black Cauldron.

It was a strange move that, as luck would have it, resulted in a pretty great game.

I have such fond memories of playing The Black Cauldron over and over again when my family got our first home computer. The game was ridiculously hard, just like my quest to become popular in school! 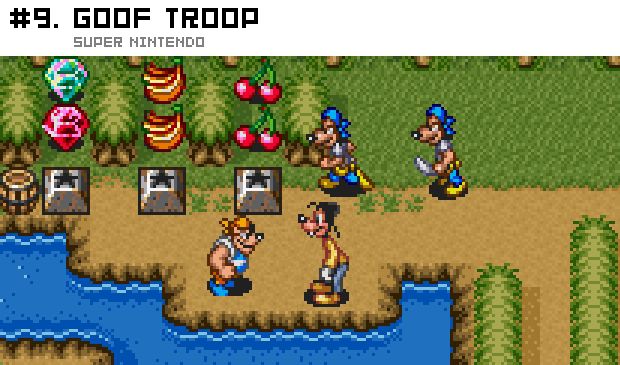 When Capcom released Goof Troop for the Super Nintendo I wasn’t expecting it to be good. I mean, the Saturday morning cartoon it was based on was okay at best, and super-irritating at worst. I love Goofy, but, man, an entire show surrounding him is a little much. (Although I secretly love A Goofy Movie — just don’t tell anyone.)

I think what made Goof Troop (the game) so great was its uniqueness. Instead of releasing a generic platform game, Capcom turned the colorful Goof Troop into a weird Legend of Zelda / Adventures of Lolo action/puzzle hybrid that surprisingly worked! I love this game! AND I LOVE A GOOFY MOVIE! There, I said it. 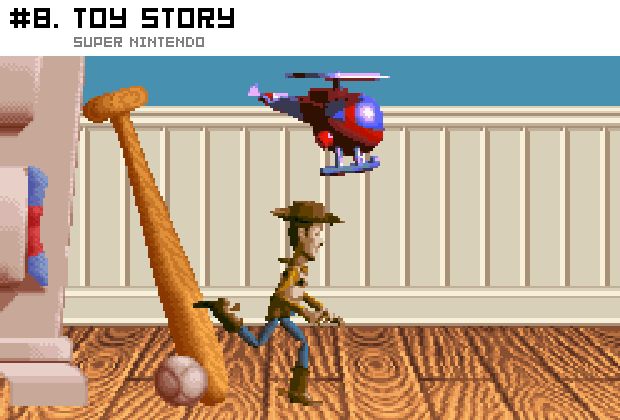 Yes, I am obsessed with all things Toy Story. But don’t think that means Toy Story for the Super Nintendo is really a bad game and I am just looking past that because OMG I WANT TO BE FRIENDS WITH WOODY!

Toy Story for the Super Nintendo is actually an awesome game — a gorgeous Donkey Kong Country-esque platformer with superb animation, fun, challenging gameplay, and surprisingly varied level design! (There is even a first-person Wolfenstein-like level set inside a claw machine.)

Also, you can use Woody’s draw string to grab hooks and swing like Simon Belmont in Super Castlevania IV. Again, awesome. 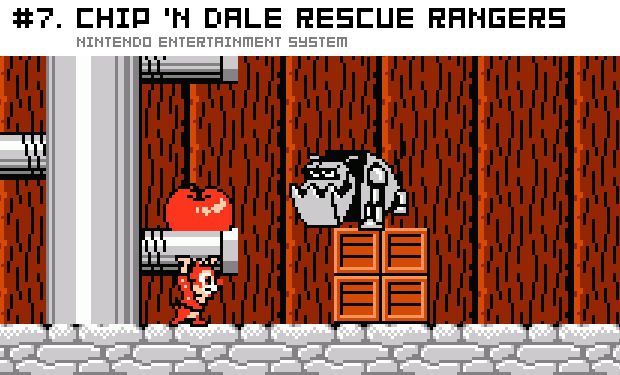 Before online multiplayer and voice chat, two people had to sit in the same room together to play multiplayer videogames, each one holding a separate controller that connected to the same system. I know, the concept is OUTRAGEOUS!

But as old and snobby as my fond love for retro gaming makes me look, I can’t help but miss the days when playing videogames in the same room as your buddies resulted in either celebratory high-fives or brutal punches in the arm after “accidentally” killing one of your friends in co-op.

Never before has the “I love playing with you … now I HATE PLAYING WITH YOU!” multiplayer experience worked so well than in Chip n’ Dale Rescue Rangers for the original Nintendo Entertainment System.

Throwing a giant apple at the back of your friend’s head and stunning them never gets old.

I am talking about in-game, of course. In-game … of course … 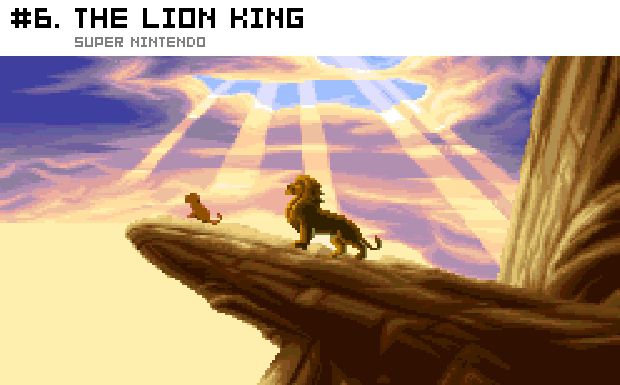 In the mid-90s there was a slew of gorgeous Super Nintendo games based on feature-length Disney animated films. Some of these — like Pinocchio and The Jungle Book — were almost forgotten over the years and, even at the time, were not as popular as they should have been.

The Lion King, however, triumphed on many levels. Helped by the simultaneous release of the movie, The Lion King surged in sales, becoming one of the best-selling Disney games to date.

But it wasn’t just the perfectly timed success of the movie that made the game a hit. The Lion King is actually a great game, powered by some high-quality animation and beautiful graphics.

But, man, is this game hard. Almost too hard. Still, for fans of the movie (and, really, who isn’t?), The Lion King is a winning game all around with some great music and memorable levels. (And, for the record, the level based on “I Just Can’t Wait to Be King” will always be my favorite.) 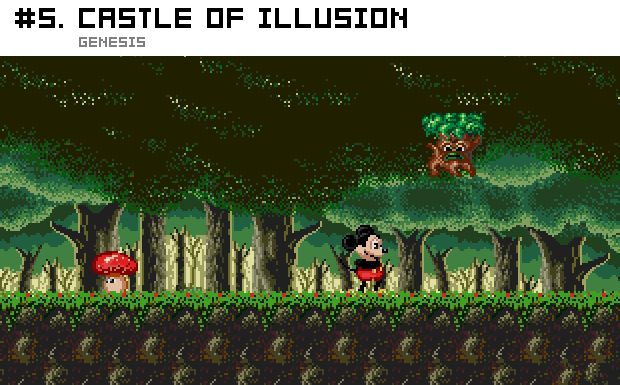 Out of all the games starring Mickey Mouse (including the just released Epic Mickey) Castle of Illusion for the Genesis is the one closest to my mouse ear-wearing heart.

In a tough field that consists of Disney’s Magical Quest for the SNES (um, Mickey Mouse in a FIREFIGHTER COSTUME!) and Mickey Mousecapade for the Nintendo Entertainment System (um, Mickey and Minnie AT THE BEACH!), Castle of Illusion is my favorite mainly because it is the most charming.

The first time I played Castle of Illusion I fell in love with it. Sure, it is basically a Mario-clone, but that is never a bad thing (if done right!). And it is a Mario clone that stars freakin’ Mickey Mouse. That is like handing me a delicious ice cream cone and saying, “Oh, would you also like to share that ice cream cone WITH THIS DOLPHIN WHO JUST SO HAPPENS TO ALSO LOVE WATCHING THE PUPPY BOWL?!”

Basically it is too many good things rolled up into one. 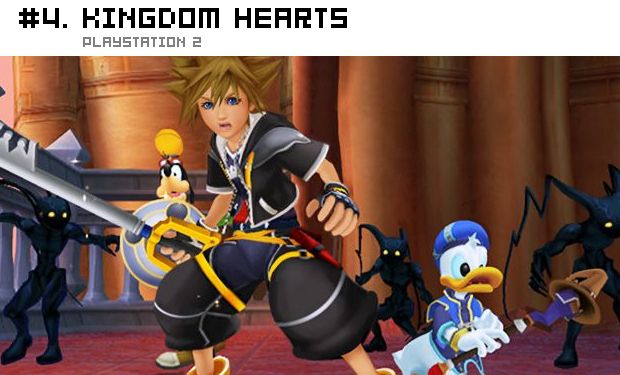 As crazy awesome and awesomely crazy the sequel is, the original Kingdom Hearts will always be my favorite. Being one of the most popular series on the PlayStation 2 (and a recent one to boot!), I am sure most of you know all about the game.

But, really, think for a second what this game is all about. Think about the first time you ever heard it announced all those years ago. It is an action-RPG that combines famous Square-Enix characters with some of the most beloved Disney stars of all time. HOW DID THIS GAME EVER GET MADE?! It really is an amazing concept that should never have worked … but, somehow, it does!

Kingdom Hearts is a Disney fan’s dream come true. It has got to the point where I am more excited to hear about what Disney-themed levels will appear in the inevitable (I hope!) Kingdom Hearts III than anything that will happen in the series’ ridiculous story.

Fingers crossed for some Pixar love. My God, can you imagine the level possibilities?

You see? This pants-tightening excitement is exactly what makes Kingdom Hearts so great.

Seriously, I want a Toy Story level. Oh, and a Finding Nemo level. And, OH MY DEAR GOD an Incredibles level. AN INCREDIBLES LEVEL NEEDS TO HAPPEN! 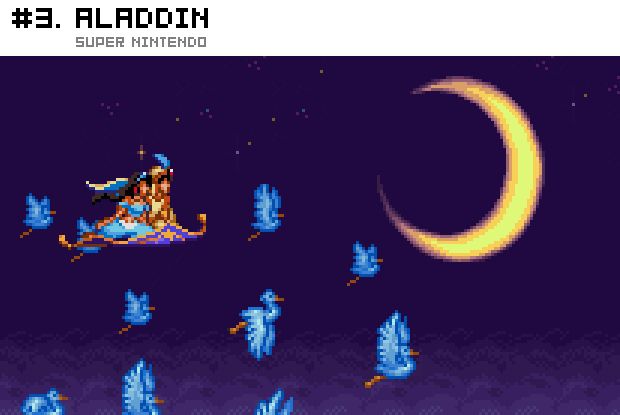 Now, this is when things get serious. These next three games are so good that I would rank them on any list of my favorite games of all time, let alone a Disney-specific one.

First up is Aladdin for the Super Nintendo. I love this game. Like, I actually clapped my hands and cheered when I was looking through a friend’s old game collection and found it.

Similar in gameplay and style to The Lion King (and countless others), what sets Aladdin apart is one thing and one thing only. Okay, fine, the graphics, animation, and music are ridiculously good, but Aladdin for the Super Nintendo has a level in which you can fly on your magic carpet with Princess Jasmine.

The level doesn’t amount to much more than collecting jewels, but they play “A Whole New World” in the background while you fly around the level on a magic carpet with Princess Jasmine! 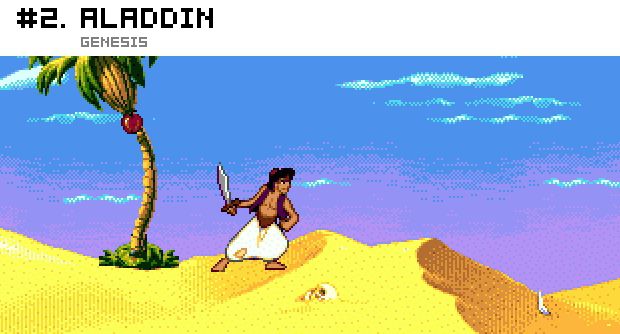 Man, this was a close call.

If someone asked me which dramatically different version of Aladdin was better — the Super Nintendo or the Genesis one — I would most likely take the safe (and rather true!) route and say they are a tie. I love them both equally!

But this is a list and I find it only fair to make a choice. So, for this list and this list alone, I am going to say the Genesis version is mildly better. But just mildly.

Funny enough, the gameplay and level design in the Genesis version of Aladdin is not nearly as good as the Super Nintendo iteration, which would lead you to believe it is automatically a lesser game. But the visuals in the Genesis version are so damn sexy and so damn perfect that they push the game over the edge. I would even argue that no other animated film to videogame adaptation has ever captured the look and feel of the original movie better.

Usually graphics don’t matter to me, but, in the case of Aladdin for the Genesis, they do. They really, really do. 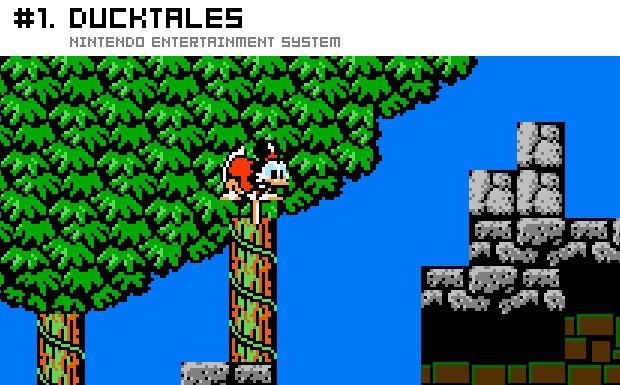 This was an easy choice.

DuckTales for the original Nintendo Entertainment System is amazing. I really can’t say that much more about it. And that’s not a knock on the game by any means! I could easily talk about the extremely fun gameplay, the flawless level design, or the incredible music (MOON LEVEL!), but those glowing specifics just don’t do the game justice.

How would you describe a tasty cupcake? “Well, the frosting was delicate, yet sweet; the cake was soft and … “ NO! “That cupcake was amazing!” Simple and to the point. Did you like that movie? “It was amazing!” How was sex last night? “AMAZING!”

Amazing is sometimes the best compliment you can give.

What do you think? Do you agree with my choices? I have a giant list of runner-ups, so any games that aren’t on here probably just missed the cut!

I could talk about Disney all day.