Yet the game itself is complex and difficult

When I got a chance to play Telepath Tactics at PAX East last month, I got a pretty good idea of how the game plays. What I didn’t get the opportunity to so was mess around with the map editor, a large part of what makes Telepath Tactics so appealing. I was also glad to hear that the Kickstarter was successfully funded and that the creator, Craig Stern, is on his way towards his stretch goals.

Although I love user-created content, a lot of the tools typically provided seem to try their best to alienate me from actually… creating the content. Map editors are often convoluted and obtuse, keeping out all but the most dedicated and experienced. After toying around with the editor in the upcoming strategy RPG Telepath Tactics, I was welcomed with one of the most intuitive tools I’ve had the pleasure of using.

Oh, and the core game itself is freakin’ great. 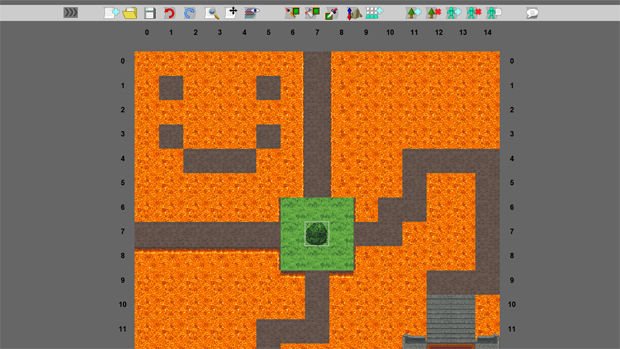 Before mentioning anything, I will say that this editor, just like the game itself, is in the early alpha stage. It’s a bit finicky in spots, with minor bugs permeating various areas. Even in such an early stage of development, however, it is impressive in how functional and understandable the map editing tool is.

Since Telepath Tactics is a strategy RPG in the vein of Fire Emblem, everything is grid-based, which makes planning a map incredibly simple to understand. Adding and subtracting rows and columns is as easy as it is in something like Microsoft Excel, and painting tiles is as quick as drawing in Paint. Playing around with the various tools is, by and large, very self-explanatory. The only thing I couldn’t grasp immediately was how elevation worked, as the elevation is invisible until the layer is toggled on.

Stern has created a few videos explaining the features of the map editor to help people to understand exactly how to get started. They’re definitely helpful, and Craig’s voice is certainly soothing, but I hope that in a future update there will be an in-game help tool with lengthy descriptions in order to prevent having to switch back and forth from the video to the editor.

It is possible to fill an entire map with a specific tile in order speed things up from the start. From there, creating a map is as simple as completing a “paint by numbers” project, so long as you have an idea in your head of what the end result should look like. Aimlessly painting a map can be a delight as well, even if it ends up looking more like a James Pollock painting and playing like a fifth grader’s distorted nightmare.

Creating a map is so snappy and quick that failed ideas won’t result in a gigantic amount of time wasted. It’s easy enough to try to map out an idea and subsequently run with it or scrap it, all without wracking your brain on how to set down a bush. Its ease of use has certainly inspired me to attempt a few ideas, even if I can’t create a worthwhile map if my life depended on it.

Also included is a script editor, which will be helpful for those looking to create their own custom campaigns. In its current state, it isn’t as easy to jump straight into as the map editor is and definitely requires some research on what things do and how they correlate to what’s happening in the game’s logic. If made a bit more accessible, this script editor will go a long way in allowing a larger portion of the community to make fully realized campaigns with actual plots instead of a series of seemingly random maps.

None of this would matter if the game itself wasn’t enjoyable to play. Having had more time with it, I definitely love the mechanics that Telepath Tactics is based off of. It is familiar enough to anyone who has played an SRPG before yet brings some seemingly small additions that have a profound impact on not only gameplay, but map creation as well.

Within the game itself, certain character classes can create bridges on otherwise impassable terrain, allowing both themselves and their team to use paths that weren’t there a moment ago. Not only does this force the player to not only think about possibly getting flanked from over water, but it also forces you to put serious thought into creating efficient maps. Having a single tile of water separating something doesn’t mean that the players have to go around if they have an Engineer on their team. Likewise, the ability to push enemies into dangers such as water or lava forces both players to play differently and also editors to edit differently.

Positioning is just as important in Telepath Tactics as it is in any thinking man’s game, and perhaps even more so considering how quickly the map can change in real time. There are many things to pay attention to whenever I move a character. The basic SRPG principles still apply, like never sending one team member too far and always rotating your back to a wall if possible, but now they’re compounded with the possibilities of getting shoved into water or attacked over it.

Telepath Tactics is looking to be a great entry into the SRPG genre alongside my personal favorites like Shining Force and Final Fantasy Tactics. It has the base mechanics, a friendly map editor, and a dedicated and passionate man behind it all. Craig has let me know that a lot of user-friendly additions are in store for the editor, so I expect it to get even better as time goes by.

The Kickstarter campaign ends very soon and has already doubled its minimum requirement for funding, but if you’re interested, it never hurts to throw a few dollars towards some good developers.