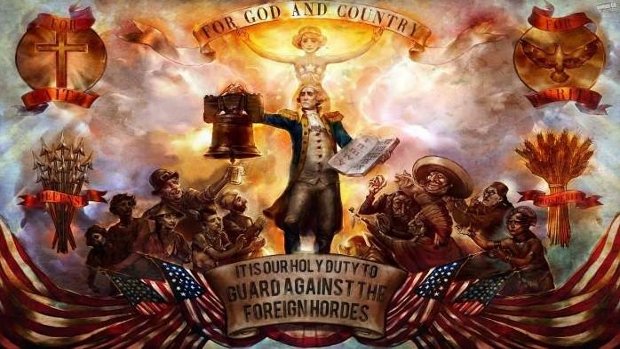 Satire: the use of humor, irony, exaggeration, or ridicule to expose and criticize people’s stupidity or vices, particularly in the context of contemporary politics and other topical issues.

It’s not every day when an ultra-conservative group takes influences from videogames to push their beliefs. BioShock Infinite features many references and ideas from ultra-conservative movements of the past, and present, and it looked as if this group, National Liberty Federation, found something they liked. Unfortunately for them, they missed the obvious satire and irony when attempting to spread propaganda.

For those not familiar with U.S. politics, the Tea Party is an organized group of conservative citizens who believe that the nation’s doctrines and foundations are under attack by the progressive moment and democratic leadership in our government. During their round of image sharing, they posted a notable piece of art from BioShock Infinite, which features George Washington holding the Ten Commandments and Liberty Bell, while proclaiming “It is our holy duty to guard against the foreign hordes.” Of course, anyone who’s played the game will know that this piece appeared in a city ruled with an ultra-conservative outlook and a nightmarish gallery of isolationist propaganda and fear-mongering.

Obviously, this image plays well to the group’s beliefs and many who didn’t know of the game and supported the group agreed with it — but it didn’t take long for fans of BioShock to take notice. Many of which posted in the comments mocking the group for missing the irony and for using a videogame for propaganda. They’ve since removed the post, but still chose to respond directly to the backlash. “We were litterally flooded with new people not only laughing at us, which we expected, but also congratulating us on seeing things differently and having the guts to post it.. It’s time they heard the other side of DC politics and if our plan works, we should be gaining many new readers now that they know we’re here.”

What do you make of this, fans? Have you ever seen a conservative group use gaming for propaganda?