On my last day covering PAX East, I had the chance to sit down with the inimitable Dan Marshall from Size Five Games to have a look at his gorgeous, stealthy, steampunk-centric burglary simulator The Swindle. We’ve posted about Dan’s promising roguelike on a few occasions, but now that I’ve had some hands-on with the game, I’d like to share my impressions.

To quickly get you up to speed, Marshall’s title is centered around the act of breaking into procedurally-generated buildings, remaining unseen in them for long as possible, and grabbing as much dosh as you can before making a daring escape to your waiting airship; or, like I did (much to Dan’s amusement and my chagrin), die repeatedly in the attempt.

The Swindle begins once your landing pod crashes outside the targeted residence. A randomly-generated thief will disembark from the ramshackle drop pod and you’re all set to begin the heist. There’s an indicator on the top left of the screen showing your current haul, and another on the top right that displays which tool you have equipped and the status of your SteamPurge ability (temporary invisibility). Tools are accessed via a radial menu brought up with the right trigger.

In the build of the game I’m working from, the steampunk burglar starts off with three tools available. The first, bombs (bundles of dynamite set with a short timer), can either be placed on the ground or stuck to walls strategically to open up new routes or do away with the meddlesome robotic guards that incessantly patrol the buildings.

There’s also a device called RemoteDet.EXE that can trigger mines placed within its range to explode on your command, perfect for setting traps and occasionally opening up new routes. Lastly, SteamPurge.EXE, a tool that will expel built-up steam from your backpack, creates a temporary “smoke screen” that you can take cover in. Once activated, it has to build up enough steam before it can be used again. 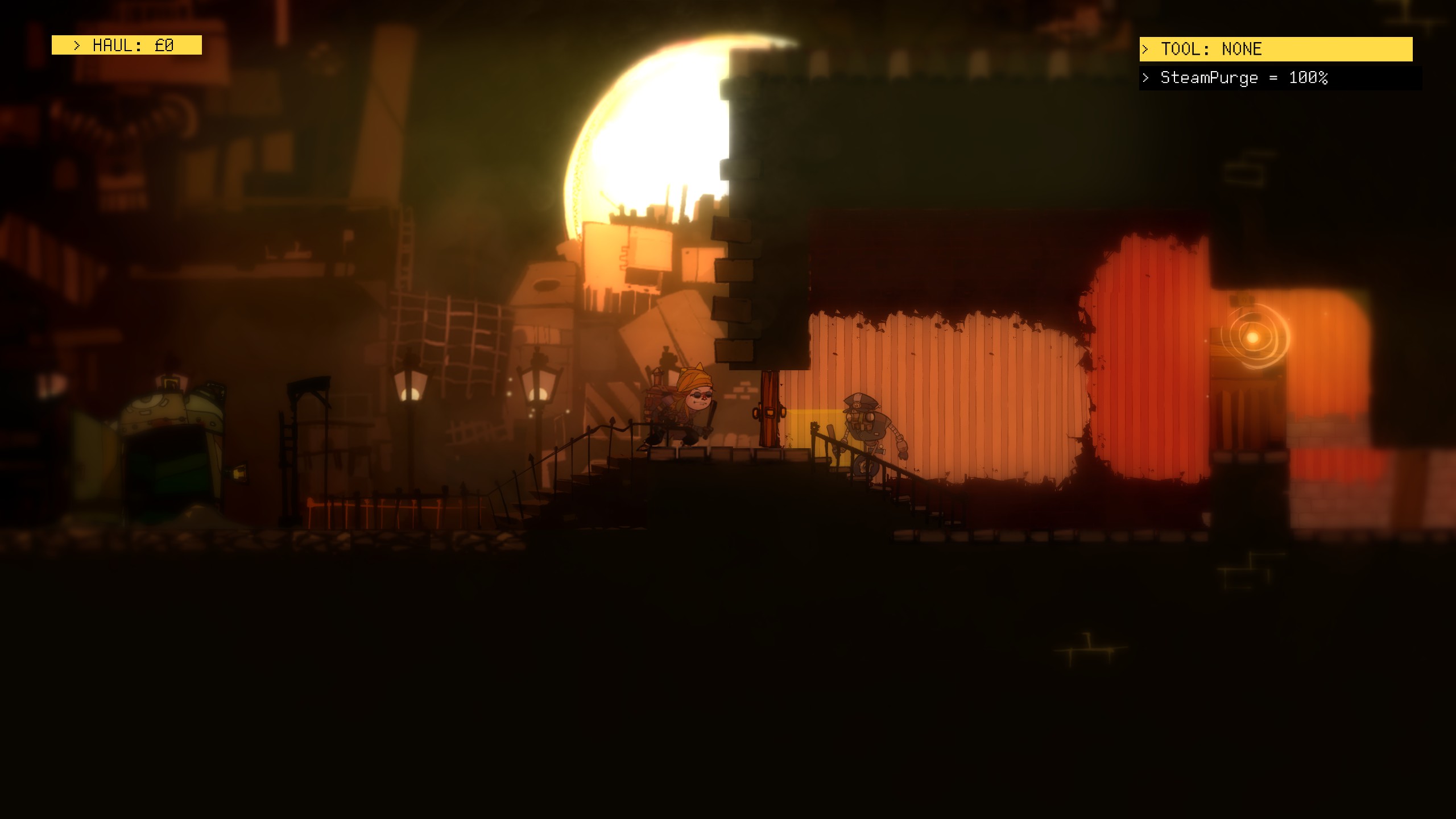 Your first objective will be to find a way into the building. Depending on the randomly-generated layout you get, your tactics will need to be adjusted accordingly. In most instances I had at least one guard by the front entrance. Guards are programmed to patrol back and forth where posted. They display a helpful “field of vision” indicator showing exactly how close you can get to them before being spotted and triggering the building’s alarm.

I should note here that when you do eventually set one off, the entire building will go into a state of high alert. Metal shutters slam down, blocking off access to different parts of the structure; guards and flying drones patrol more vigorously; and mounted cameras scan the area looking for you. So it’s best to avoid detection for as long as you possibly can (unless you like to live dangerously).

Once inside, you’ll have plenty of options on which way to go and how you’d like to get there. Depending on the layout of the building, some hallways will be a dead end. This can be overcome by blasting through walls with your stash of bombs; I believe you begin with nine or ten — plenty to get you through a run, in my experience. As previously stated, fortuitously placed security mines can also be used to gain access to blocked-off rooms as well, but that comes down to luck. 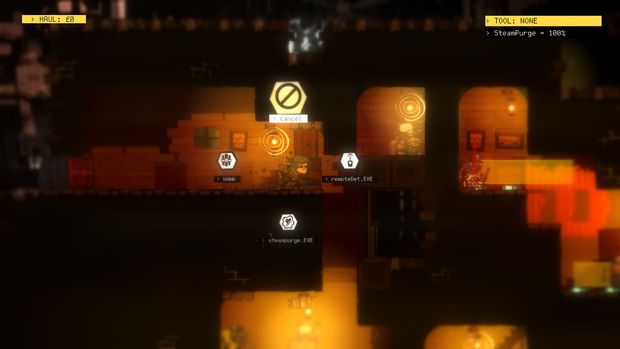 As you’re sneaking your way through, you’ll occasionally come across small piles of money inexplicably lying on the ground. Some are worth the extra effort for the easy loot, others are best left alone due to the associated risks involved. What you’re really after in your heist are the computers, or perhaps I should say, difference engines. It’s at these hackable spots on the map that you’ll pick up the real money in the game; the rest is chump change by comparison.

Hacking is very smartly implemented so that it’s not challenging but just time consuming enough to put the pressure on before you’re caught in the act. To initiate a hack, you’ll hold down Y on the controller. Once you’ve begun, you’ll get a few directional prompts which will finish the job and net you a notable sum for your efforts. Simple and elegant, just the way I like it.

Once you’ve pushed your luck as far as it can go and you’ve safely collected as much cash as you possibly can, it’s time to sneak back to your pod and ascend to the airship. In a perfect world, that’s how it might go. In reality it usually ends with your character tripping an alarm or being spotted by the guards, which results in a full-out run for your life trying to escape from the building before being killed, which should be noted is actually a pleasurable way to end the mission. 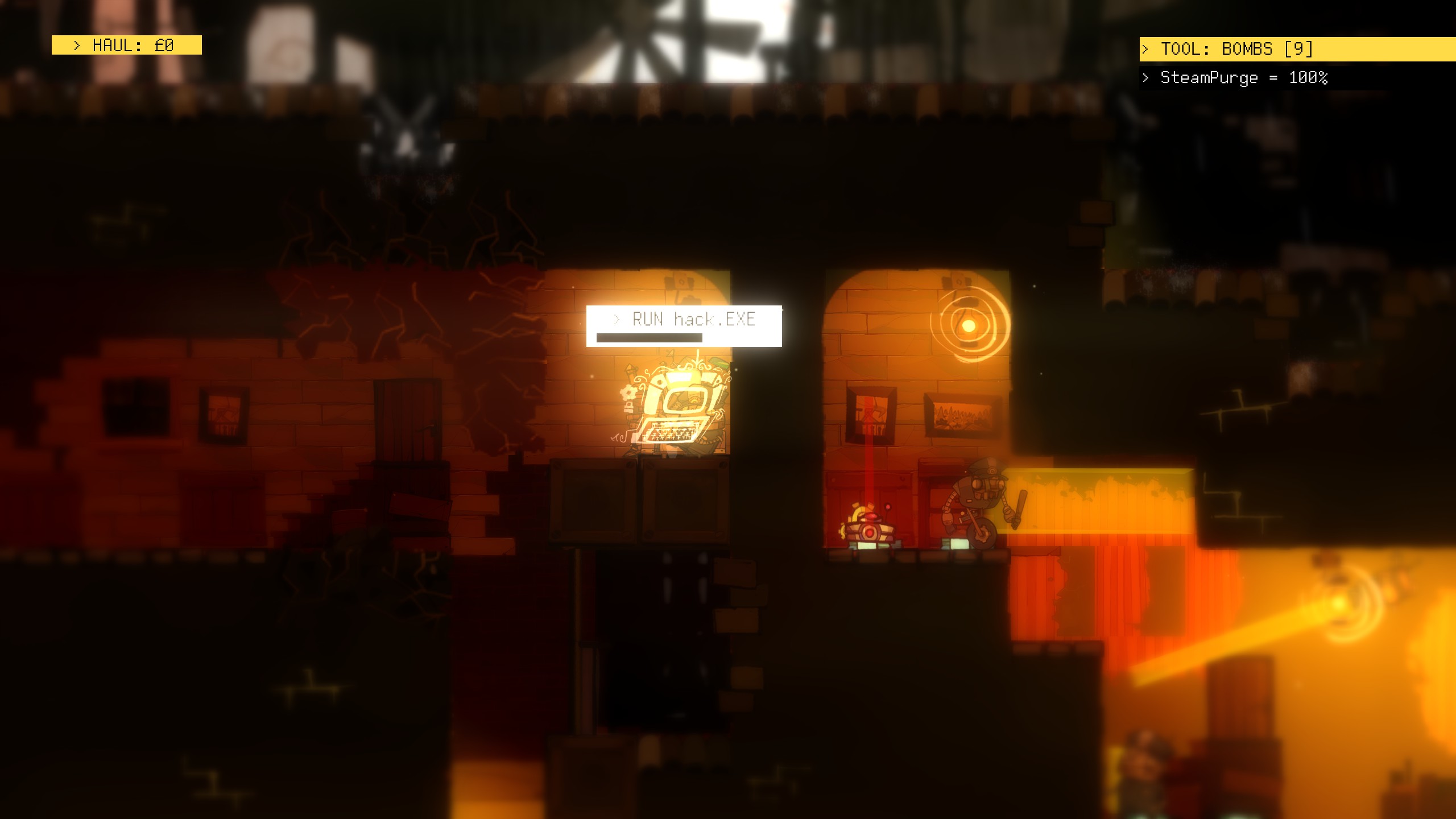 The Swindle, tentatively scheduled for a summer release on Steam, PS3, PS4, PS Vita, WiiU, and Xbox One, is far and away one of the best games that I played at PAX East.

Its lovingly handcrafted 2D art style enchanted me from the moment I first laid eyes on it. The gorgeous steampunk aesthetic coupled with Spelunky-influenced gameplay made it an undeniably standout title in the sea of indie games on display at the expo this year. For those who think they dislike the roguelike genre, this might be the one to change their minds.