I’ve just spent a few hours with Size Five Games’ (of Time Gentlemen, Please! and Ben There, Dan That! fame) newest offering, The Swindle. As a coalition of thieves in alternate-reality Victorian London, you’re tasked with stopping the Scotland Yard before they can activate the Devil’s Basilisk. As archaic and artifacty as that sounds, it’s actually an omniscient Artificial Intelligence that, if activated, will put an end to all thievery forever.

And who wants to live in a world without thieves? Get ready to skulk around in randomly-generated buildings with randomly-generated addresses as a randomly-generated rogue. You’re gonna have to steal from the poor before you can amass the wealth necessary to take down Scotland Yard, like some Asshole Robin Hood. Oh, and you only have 100 days to do it. At least you’ll be having some sneaky fun! 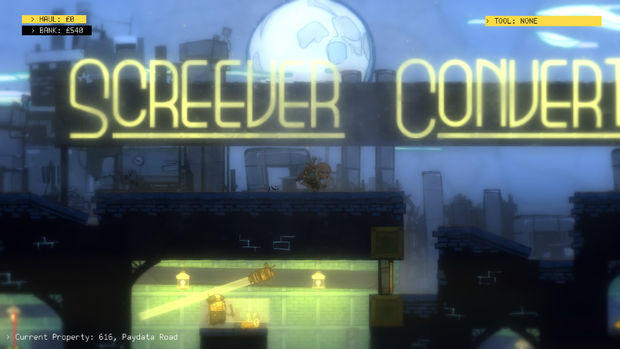 Sneaking around ghettoes starts off simple. You don’t have any tools, can’t hack into computers, and can barely fight off the robotic security guards posted throughout each location. Enemies have a beam of light projecting in front of them that shows their field of vision to help you plan your route. You can try to ghost around them, shutting every door behind you and leaving all windows intact.

This is difficult with limited resources, so you need to start by taking any cash you see laying around. Don’t get too attached to your initial thieves, as they will almost assuredly die as you acclimate to the various types of robots, surveillance equipment, and traps. Once you make enough money to buy the hacking ability, the real game starts. Placed throughout each map are various hackable computers, where you have to hold down the Y button and face a series of directional button prompts to earn the big bucks.

Hacking brings The Swindle to sweet, panicked life. I’ve found myself in ass-clenching situations like trying to hack for a big pay day while a surveillance camera is swiveling over towards me, escaping at the last second only to run headfirst into a mine. You can hack these explosives, too, but I didn’t realize that at first and have come to this conclusion: fuck mines. I’ll work on getting better at using them to my advantage. 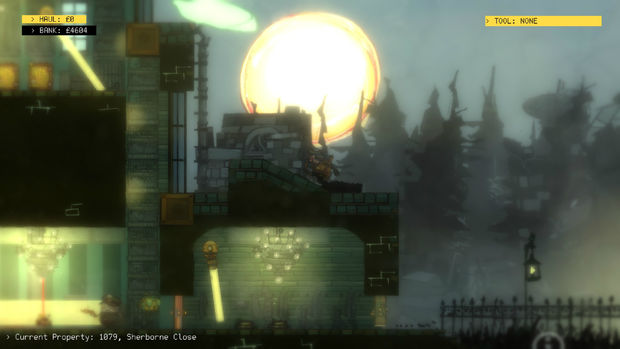 There are multiple types of maps to explore, with each one representing bigger rewards and more precise challenges. I’ve only got to the third one, and I’ve gone through about 80 thieves, including my precious Letitia Danklighter, and my favorite, Bart Stealer. As Zack Writer, I appreciate those who are named after their professions so we can all get to the point that much quicker. I need to grind a bit more to move on, so I can buy myself the teleporting device. I’m excited to see how much the game changes towards the end.

Expect a full review in a couple of weeks when The Swindle is released on July 28 for PC, PlayStation 3, PlayStation 4, and Vita. It’ll be out on July 31 for the Xbox One, and a Wii U release will follow shortly.