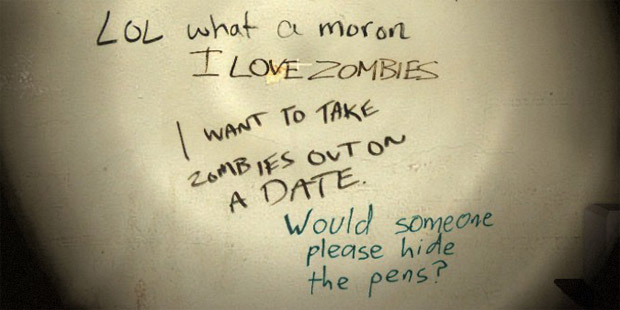 As we usually do when something Left 4 Dead-related releases, we’ve all the writing on the walls in the just-released Left 4 Dead 2 demo for you to look at/read. Unlike the previous games, the survivors here seem to be a lot more concerned with their own safety, and less with making fun of other people. Apparently these guys actually care about the infection and surviving! Losers.

There’s still a small amount of sass, but unfortunately there’s no epically bad poems or internet memes. We do hear a rumor though that people can carry the disease without becoming infected (yet). Are all the protagonists of the Left 4 Dead games carriers, or are they just flat out immune? There doesn’t seem to be a consensus on how immunity/being a carrier works on the wall.

As much as I love them, I think I would wet myself if the finale for the final campaign of the sure-to-come Left 4 Dead 3 was you fighting a finally-infected Zoey, Louis, Bill, and Francis.

If you don’t have the demo yet, hit the jump for a full transcript of the wall writing, and check out the pics in the gallery.

“The only good carrier is a DEAD carrier”

“Why are they separating everyone”

“Some people are carriers”

“They’re immune but they can spread the infection”

“Who told you that?”

“Go to the PARK. Army’s evacing everybody out”

Arm yourself. Barricade your homes. Stay together. Wait for official instructions.

Sec 21 Public Security Act of (Some numbers I can’t make out) U.S.M.C. (Numbers)

“Way to step away from the pack”

“LOL what a moron”

“I want to take zombies out on a date”

“Would someone please hide the pens?”