Things aren’t going well in The Surge 2‘s dystopian landscape. Jericho City is a far cry from the dimly-lit industrial buildings that dominated so much of The Surge‘s runtime, but it’s hardly a happy place. A mysterious storm lingers overhead. Its surreal presence is ominous, made all the more menacing by the massive walls that supposedly keep Jericho City safe. No one can enter, and no one can leave. Something’s amiss.

Although it’s impossible to know what’s happening in Jericho City — The Surge 2 isn’t out until 2019, after all — it’s certainly an evocative setting. During a hands-off demo with developer Deck 13, one of the walled city’s different locations, a synthetic park, was featured prominently. The human-made slice of nature was inviting, despite its dangerous inhabitants. And in many ways, the same can be said for all of The Surge 2.

The Surge was an enjoyable game despite its flaws. It was brutal and brooding with a limb-based combat system that encouraged players to target specific parts of enemies’ bodies. It worked great in theory, but after a while, the easiest path through the game revolved around targeting whatever unarmored weak point was available. The Surge 2 looks to change this. In fact, it seems as though the driving force behind the upcoming action game is to encourage a freer, more expressive playstyle.

“Something I’m going to say multiple times today is how much we wanted to give players the opportunity to create their own combat style,” said Adam Hetenyi, Deck 13’s head of game design during the presentation. Though Hetenyi was quick to mention The Surge 2‘s new weapons, abilities, and environments, the game’s player-focused approach starts immediately. For this sequel, Warren (The Surge‘s protagonist) is out. This time around, players will stomp through Jericho City with a unique avatar thank to an all-new character creator. “I’m talking all about of this freedom we want to give people,” Hetenyi said, “and what better way to do that than to [let players] create their own character at the start?”

The Surge 2‘s freeform aspirations seem to go further than a character creator and developers wanting a player-driven experience. Listing off vague concepts is easy. But after watching the guided demo alongside Hetenyi’s narration, it seems as though Deck 13 have made strides to ensure the game is bigger, breathier, and more challenging. It makes a great first impression. 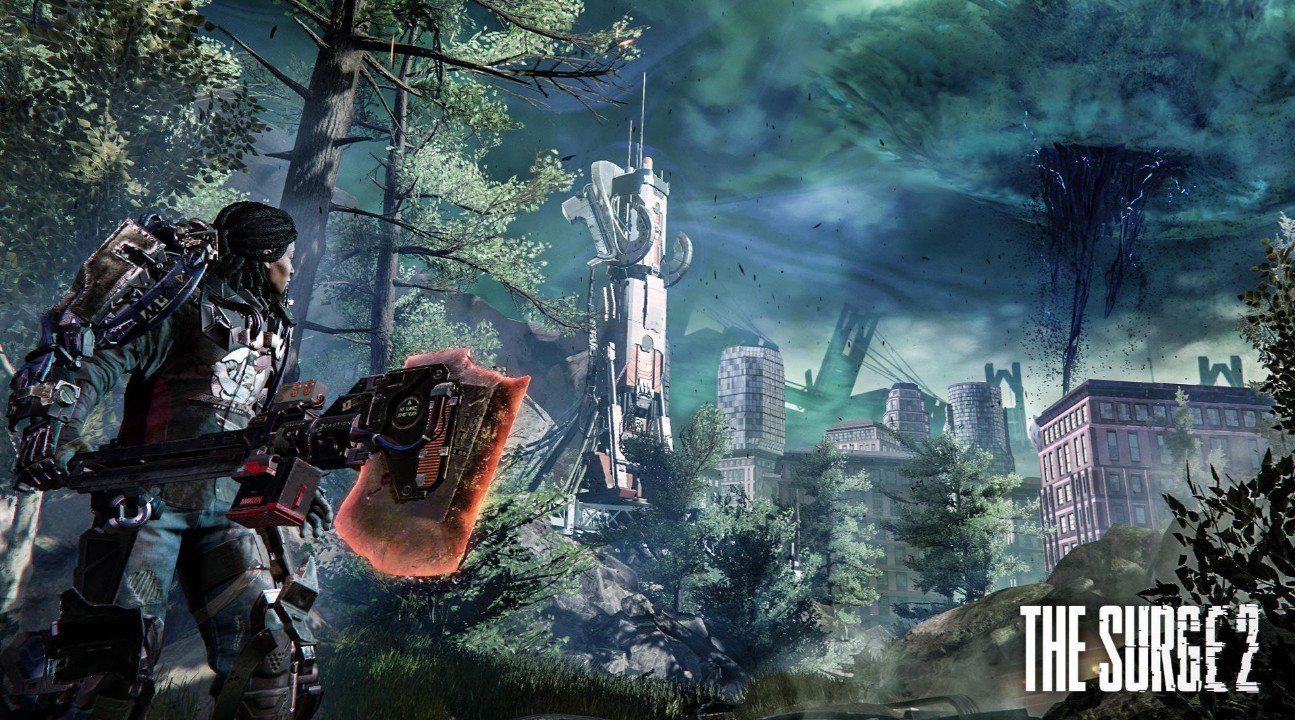 The demo followed an exosuit-clad heroine pushing through the aforementioned synthetic park. According to Hetenyi, the player’s primary goal in this part of the game is to activate a series of repeller devices. A monstrous beast is hiding in the park, and triggering each repeller will force it out of hiding. Although the creature didn’t make an appearance, there were plenty of other opportunities to showcase how The Surge 2‘s combat looks.

“The big combat feature is our body part-targeting system,” Hetenyi stated as the demo’s first encounter began. The Surge 2 revamps enemy AI, making both single and group encounters more dynamic than in its predecessor. Because enemies will attempt to outflank and rush players to gain an advantage, targeting specific limbs to exploit weaknesses or chop off armor and weapons is more important than ever. According to Hetenyi, the majority of weapons and armor schematics in The Surge 2 come from limb-specific finishing moves. And with double the arsenal, it’s safe to assume that there will be tons of hacking happening when the game releases.

The demo featured one of The Surge 2‘s new weapon categories. Double-duty weapons function similarly to the first game’s Heavy-duty weapons. They’re big, powerful tools that attack slowly and cause massive damage. Double-duty weapons — like the ax blade in the demo — pack a punch, but can also transform into smaller, faster instruments of death by tapping the attack button. In action, the Double-duty weapons aren’t unlike Bloodborne‘s trick weapons, and their versatility reinforces how Deck 13 are aiming to encourage a more expressive, player-defined combat system.

Watching the demo, it’s clear that Deck 13 have spent a lot of time thinking about what The Surge did right. The Surge 2 looks tough. The addition of directional blocks — timed defensive moves that, if executed correctly, leave enemies wide open for ripostes — and an expanded drone system, add an exciting new layer to the already entertaining limb-based combat. With a wider variety of weapons, consumables (like a bio-sensor that highlights enemies in cover and through walls), and armor, it seems as though The Surge 2 wants to spoil players with plenty of choices. 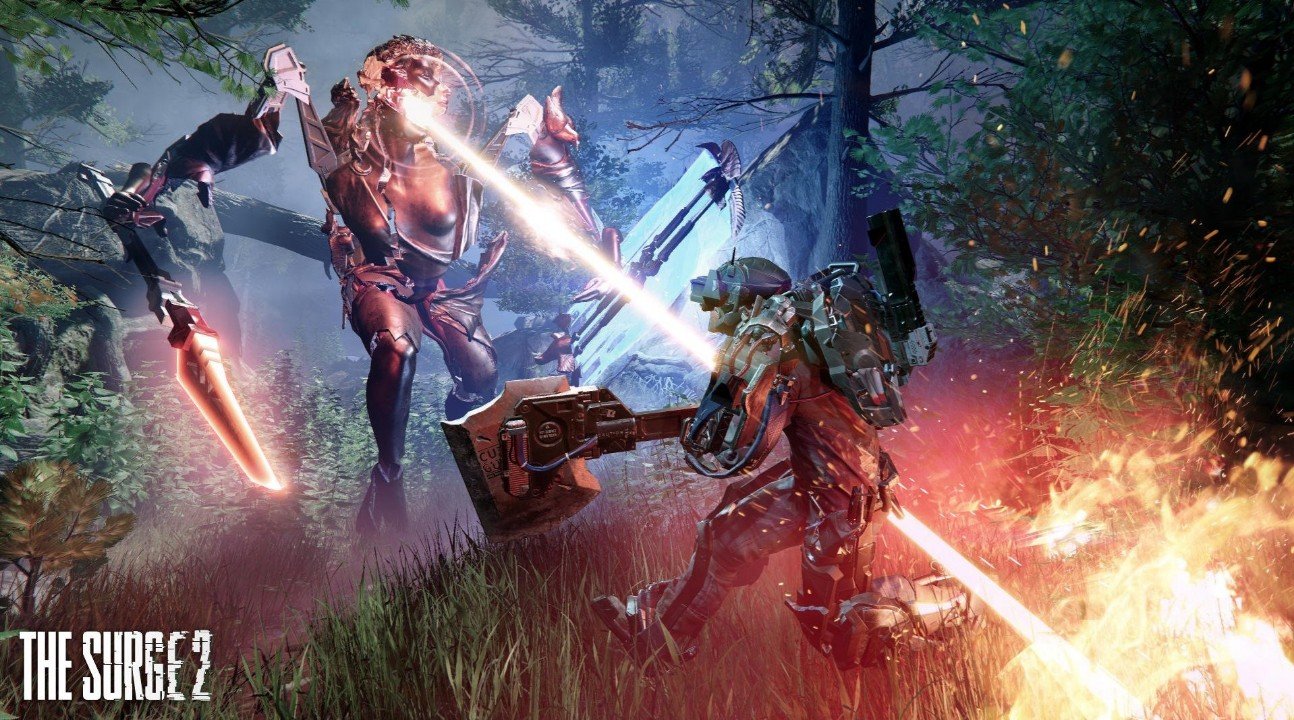 The hands-off presentation ended with a bang. After fighting through a handful of mercenaries, the heroine found herself facing off against the park’s main security measure: a statue-turned-warrior. The statue functions as a guardian of sorts. According to Hetenyi, Jericho City’s wealthy placed these mechanical guardians throughout the park to “keep undesirables out.”

To take the statue down, players will have to target specific areas — like its armored head that opened up to fire a laser beam. The Surge 2‘s boss battles require a bit of on-the-fly strategizing. They’re armored, deadly, and often without visible weak points. In order to stagger the boss, the heroine fired a shot from her support drone at its head, damaging the armor and softening its defenses.

“Even though it’s fully protected, we’re able to break through [its armor] piece-by-piece,” Hetenyi said during the battle. After breaking the armor, the avatar worked on destroying its off-hand shield. There’s a methodical nature to boss battles; they’re sturdy and well-armored but can be tackled multiple ways.

“We want people to feel like these enemies have strong offenses and strong defenses,” Hetenyi said during the fight against the statue. “But if the player is persistent and uses all the tools at their disposal, they’ll be able to break through.”

The Surge 2 will release in 2019 on Steam, PS4, and Xbox One. If its E3 demo is anything to go off of, a trip to Jericho City will be well worth taking.