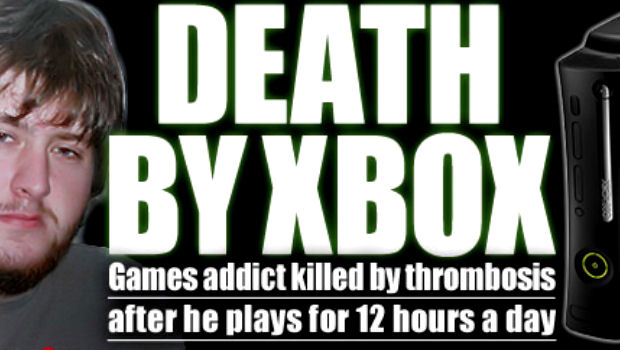 The Sun has gone for a double whammy today! Earlier we talked about its continuing vendetta against the 3DS, and now we have a far more alarming story for your Saturday morning hysteria. The British paper, known predominantly for pictures of tits and histrionic drivel, has run the huge front-page headline, “DEATH BY XBOX.”

The story concerns itself with twenty-year-old “gaming addict” Chris Staniforth, who died of deep vein thrombosis. The blood clot that finished him off, reports the Sun, is a direct result of his gaming habits. It might actually be true, since playing Halo for twelve hours a day could indeed lead to fatal problems, as could doing anything sedentary. That doesn’t, of course, justify a “news” paper claiming that the Xbox killed you.

Interestingly, the parents of the dead man aren’t angry at games at all: “I’m not for one minute blaming the manufacturer of Xbox,” said his father. “It isn’t their fault that people use them for so long. But I want to highlight the dangers that can arise. Playing on it for so long is what killed him — and I don’t want another child to die.”

That’s fair enough. It’s a shame the Sun had no interest in contributing to a valid concern and instead went straight for the “videogames will MURDER you” message. And they wonder why intelligent, rational human beings think the Sun is a dribbling piece of shit.