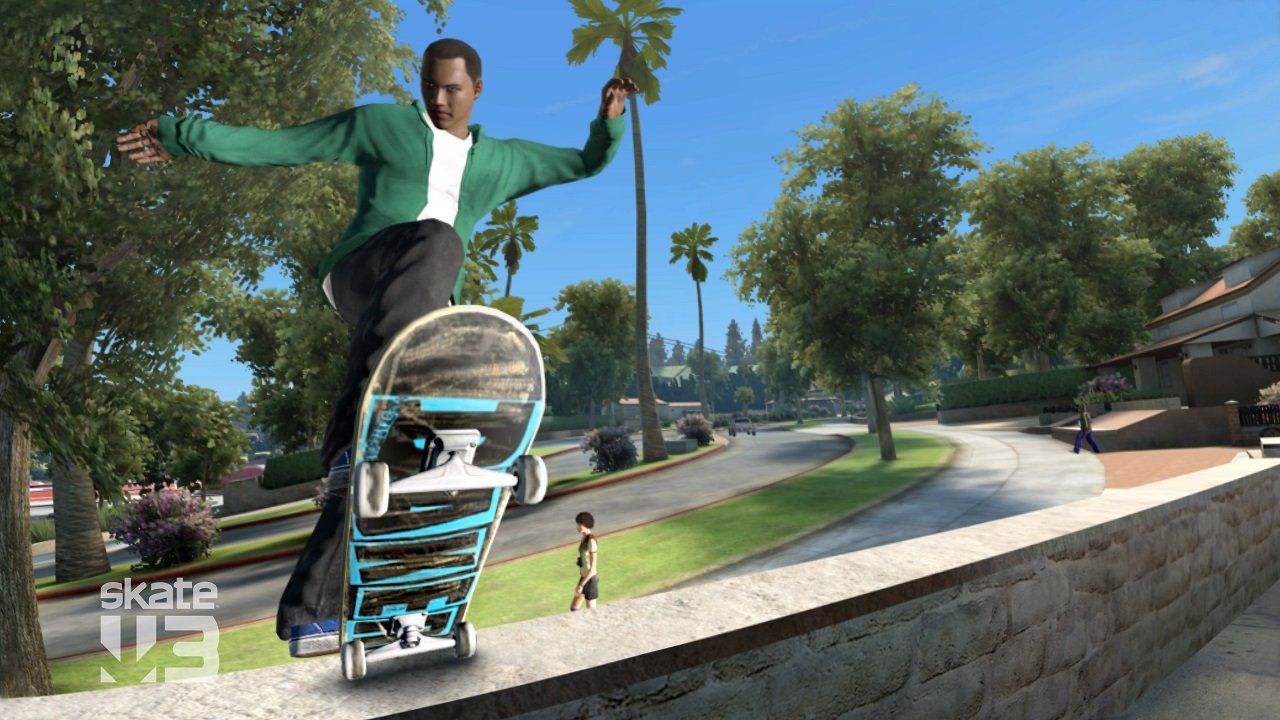 The analog sticks on my PlayStation 3 controller refuse to stay in place. They’re loose and unruly to an absurd degree. The right stick drifts upwards, slowly and surely, without a thumb to guide it. When I apply pressure to it, the stick crashes towards whatever direction I’m pointing. By any metric, my controller is terrible to use. But when I turn my brain off and react to what’s on the screen, those aging analog sticks work like a dream.

It’s muscle memory at this point. The combination of badly-worn analog sticks and memory-driven control comes from the hundreds of hours I spent cruising around Port Carverton in Skate 3.

Earlier today, news broke that Skate 3 would be playable on the Xbox One thanks to the system’s backward compatibility program. I’m stoked about this, because now I finally have a reason to invest in an Xbox One.

Skate 3 isn’t a perfect game. It is, however, a perfect game about skateboarding. Port Carverton is a playground pretending to be a city that’s been molded into a skateboarder’s digital paradise.

Skateboarding has grown a lot over the last few years. Each new generation of skateboarders has iterated upon the tricks and styles of those that came before them. Skate 3 did this too, building upon the realistic approach of its predecessors and tweaking how it controlled in a effort to create a simulation of skateboarding that captures both its challenge and defiant spirit.

Unlike the Tony Hawk’s Pro Skater games and their distillation of skateboarding into high flying airs and circus-like antics, Skate 3 represented the raw appeal of skateboarding. It was a game about exploring every inch of a city and charging at its architecture in hopes of finding a great new spot to skate.

At first, Port Carverton didn’t look all that special. Compared to the fictional cities found in most video games, it was just a mashup of architectural influences and public plazas. But if you took a look at Port Carverton’s three districts with a skateboarder’s eye, the city took on a new life. The University District is home to buttery smooth ledges and backyard pools. The Industrial District is crusty, full of DIY parks and concrete ditches. Downtown blended old-city bricks with modern art installations for a fusion of big handrails and obstacles that challenged a skater’s creativity. Though discreet representations of the kinds of “spots” found in most major cities, Port Carverton’s districts came together as one cohesive unit where players had everything they could ever want to skate and more.

The openness of Skate 3‘s city encouraged players to think like a skateboarder. It understood what it’s like to look at your surroundings in hopes of finding something new to skate. Better than any other game about skateboarding, Skate 3 understood the defiant nature of destroying public property as a creative outlet and the feeling of being an outsider that comes with a willingness to drop everything on a whim to go ride a piece of wood around the streets. Unlike the Skate games before it, Skate 3 dropped much of the security measures that made accessing many of the most desirable spots difficult. Instead, it encouraged players to escape into Port Carverton and have some fun.

But Skate 3 isn’t just important for how it gave players a city absolutely littered with unique places to skate. The game’s best feature was how naturally it controlled compared to a real skateboard. Lone gone were the face-button combos of THPS. In Skate 3, you had to delicately trace the right analog stick before flicking it upward and launching into the air. It was a cipher for the actual movement of a skateboarder’s foot, and a damn near perfect one at that. If you’ve never done a kickflip in real life, it’s difficult to image what it really feels like, but rattling one off in Skate 3 is about as close as it gets.

Every subtle movement required for each different trick was a blueprint for its real-life counterpart.The downward diagonal drag, clockwise roll, and delicate push up once again is a distillation of how a 360 flip works in real life. It sounds silly to say that a video game from 2010 understood the nuances of how skateboarders make their boards flip and spin with seemingly such little effort, but trust me, it’s impressive.

What’s even more impressive is the way that Skate 3 encourages mastery. Anyone who has ever spent an afternoon on their driveway, skateboard under their feet, knows how frustrating it can be to learn a new trick. Your back aches, you fall, your shoes get destroyed. It all seems so impossible. But with enough time and practice, one day it just clicks. The trick becomes second nature. From that day onward, you don’t even have to think about doing the trick that once eluded you. The movement just becomes ingrained in your skating.

Skate 3, by requiring that players learn nearly identical inputs to real skateboarding, emulated this struggle. It can be immensely difficult to learn even the simplest of tricks in Skate 3 at first. But, much like those hours spent popping a board up on your driveway, sooner or later it just makes sense. Port Carverton becomes your canvas for the chaotic art that is skateboarding. Learning new flips and grinds opens up new ways to approach a spot. Before you even notice it, you move about the city — jumping down some stairs, hitting a handrail, bombing a hill — without even realizing what you’re doing. It’s natural and freeing all at once.

I don’t really think all that much when I play Skate 3. I don’t have to. After countless hours honing my skills and learning Port Carverton’s layout, I can do just about anything I want on a digital skateboard. When I’m stressed or overwhelmed, or even if it’s just too cold to actually go outside and skateboard, Skate 3 is the game I turn to. It’s nice to have a game that feels so natural. Those worn-out analog sticks still work like magic, all I have to do is hit the streets.