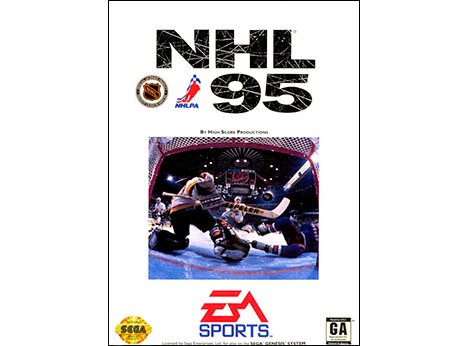 Yes, it’s technically July here on the East Coast, but I had my heart and mind set on writing a “start of the affair” article, so here it is.

I must confess something to you all: before I got a PS2, my game collection consisted (nearly) entirely of sports games. I’ve played many of them over the years — Super Baseball 2020, NFL Quarterback Club 96, and MVP Baseball 2005 — but I remember no sports videogame more fondly than EA Sports’ NHL 95 on the Sega Genesis.

Bliss. Pure bliss. That’s how I would describe NHL 95 — or at least, that’s the way my younger brother and I felt about it back when we were playing it on Christmas morning, 1995 (we were seven and nine years old, respectively). In fact, I would’ve captioned the above image with that, but I didn’t want to sully the game’s cover art.

I mean, look at it. It features a wonderful action shot of the New York Rangers’ Alexei Kovalev scoring a goal on Kirk McLean of the Vancouver Canucks during the 1994 Stanley Cup Finals, which the Rangers would win in a thrilling seven-game series. And me being a newly christened Rangers fan, having just seen the team end a 54-year Cup drought, how could I not adore the box? Plus, the game would later be immortalized in 1996’s Swingers (video NSFW).

But there was more to it than that. NHL 95 was truly one of the greatest sports games in the entire lifetime of the Sega Genesis; hit the jump to see me wax nostalgic about it.

The first thing that struck me about NHL 95 was the cartridge itself when I pulled it out of the box. I had never seen a square Genesis cartridge before, and I was befuddled by the yellow plastic lightning bolt-looking thingy on the left side of it. But after buying two other EA Sports games for the Genesis, Triple Play 96 and Madden NFL 96, I figured that it was just EA’s “thing” for its sports titles. I still have no idea what the yellow piece is — can anyone shed some light on that?

Regardless, once I popped the cartridge into my trusty black beast of a 16-bit console, my life would never be the same. NHL 95 brought a whole host of groundbreaking gameplay mechanics and features to the table (although regrettably, it lacked the fighting that had been present in the prior year’s game and would be brought back in NHL 96). For the first time in a hockey game, you could play a full season. Roster management was also brand new; you could trade, release, and sign players, and the game also introduced the now-standard create-a-player mode.

It’s impossible to deny that create-a-player is awesome; as I always say, videogames are about living vicariously, and that mode made it possible. At the time, the idea that I could put myself in a Rangers uniform — with all attributes maxed out to 99, of course — and act out fantasies of swooping down the ice and putting the puck past Patrick Roy (pronounced wah) was mind-blowing. And the ability to trade players to your heart’s content and led to what my brother and I referred to simply as “the lineups.”

I went with the Rangers, and my brother somehow ended up picking the Detroit Red Wings as his team (why, I’ll never know — this was, of course, before the team’s late-90s/2000s heyday). We would each go through every single team’s roster, mining them for the top talent in the NHL. We’d do our own little “draft,” where we each took turns picking guys with names like Gretzky, Lemieux, and Brodeur (though I naturally stuck with my hometown hero, Mike Richter).

Once the unbeatable rosters had been assembled (this was before “balanced” trades were implemented, so you could trade a 67-rated scrub for a 96-rated future Hall-of-Famer), we’d each take a sheet of paper and write down our entire roster on it. Then, we’d arrange our all-star lineups into the proper lines (putting Pavel Bure on the power play, for example, and Ray Bourque on the penalty kill) on paper — and after that, we’d set up those lines in the game.

After all that bitter wrangling, it was finally ready to play. Here’s where I must mention one of a few glaring faults that NHL 95 has: once you knew what you were doing, the game became a cakewalk. If you played full 20-minute periods (which took way too long), it wasn’t uncommon to have multiple players on your team with double-digit goal tallies. And that’s why I’m so glad that I had my brother; he might’ve been two years younger than me, but he sure put up stiff competition, which the game was sorely lacking by itself.

Here was the standard setup: 10-minute periods with penalties and icing on, but no offsides. At the time, we were still too simple-minded to comprehend the comparatively complicated rule that no player could enter the attack zone before the puck (seems pretty straightforward in hindsight, doesn’t it?). And then we’d just go. My brother and I sure had some epic battles, though we both had a major drawback: we were extremely offense-minded. We knew how to rack up the goals, but we weren’t nearly as good as preventing them from being scored.

The only way to have a remote chance was to take goalie control away from the CPU (hold B) and then try to make the save yourself (C button). Why? Well, this was another significant problem with the gameplay: the infamous “drive-by” move. Our name for it was the “wraparound,” but it doesn’t matter what you call it — the issue was nearly game-breaking when playing against an AI goalie.

Essentially, you could sweep across the front of the net and flick a quick backhand wrist shot into the net, and you would be successful almost every time. It was nearly unstoppable. The goalie was never fast enough to follow you, and would remain on the side of the net that you approached him from. The contests between me and my brother would already produce scores like 28-26, and if we didn’t both guard our own goals, the totals would surely have been twice that. Wikipedia has some more information, if you’re curious.

I call NHL 95 life-changing not only because of the fantastic features it debuted, ones that would go on to become requisites in sports games everywhere. It wasn’t just because it was an amazing sports game, a title that has gone down in the annals of videogame history as a standout hockey title. And the fact that I can still hear the title screen music in my head isn’t the main reason that the game holds a special place in my heart. NHL 95 was personally very important to me because of the bond it created between me and my brother. We must’ve played, I kid you not, thousands of games of NHL 95 over the years, and it was the first videogame that we were both perfectly good at.

I don’t just mean that the two of us were awesome at the game (which we were). NHL 95 wasn’t close to being the first game we played together (that title goes to Super Mario Bros. 3), nor was it the first sports game we played with each other (Tengen’s R.B.I. Baseball 3 on the Genesis). But with those games, I was usually much better than he was, although that was more a result of his very young age than anything else. Once we got to NHL 95, though, I was amazed to find that he was just as good as I was — and so began the greatest rivalry in the history of the Sarkar family.