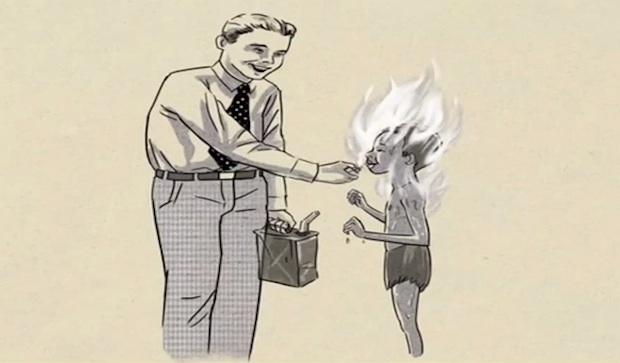 I spent a fair bit of time with The Stanley Parable and didn’t find anything offensive, but author Oliver Campbell and others did, and now developer Galactic Cafe plans to release an update to change out two images.

Those that played will recall the instructional video on choice (also here on YouTube). In it, there’s an image of a man lighting a cigarette for a little boy, and another lighting the same boy on fire. Campbell found this image racist, prompting him to reach out to creator Davey Wrenden.

“I received two separate complaints today from people who found that the images made them significantly uncomfortable,” Wreden told Polygon, “and in one case made a teacher feel unable to share the game with her young students.”

“It’s actually really tough to respond to complaints about someone being offended, but I think I would be able to change the actual images without having to go to too much trouble (though the dialogue in that section would be very difficult to change).”

Wrenden told Polygon that he’s not married to the gag, and that it changing it wouldn’t break anything about that particular section.

“If a person would feel less comfortable showing the game to their children then I’ve got no problem helping fix that! It’s really as simple as that,” he said.