Not a sequel to the Maiden song

The point-and-click adventure genre has slowly been coming back into prominence over the last console generation. Starting with revivals of old LucasArts games from Telltale, the legendary Secret of Monkey Island got an HD port in 2009 and gamers were able to relive the glory days on modern platforms. With the success of that re-release, it was only a matter of time before more games in the same vein came to life.

There have certainly been ups and downs with these newer titles (Broken Age was a massive disappointment), but no one has quite nailed the LucasArts vibe of the ’90s (Thimbleweed Park being an exception). When I got an email about checking out 3 Minutes to Midnight, I initially didn’t know what the hell I was in for. The name sounds like a play on an Iron Maiden song and I thought this was going to be some weird, heavy metal inspired shooter.

Turns out it’s a point-and-click game in the style of LucasArts classics. Think a combination of Monkey Island with the aesthetic of The Brady Bunch and you’re kind of close. Taking place in the 1940s, 3 Minutes to Midnight tasks players with uncovering a mystery in New Mexico after a freak explosion wipes everyone’s memories. Solving that mystery will require you to talk to citizens, combine odd items together, and click on literally everything in sight. 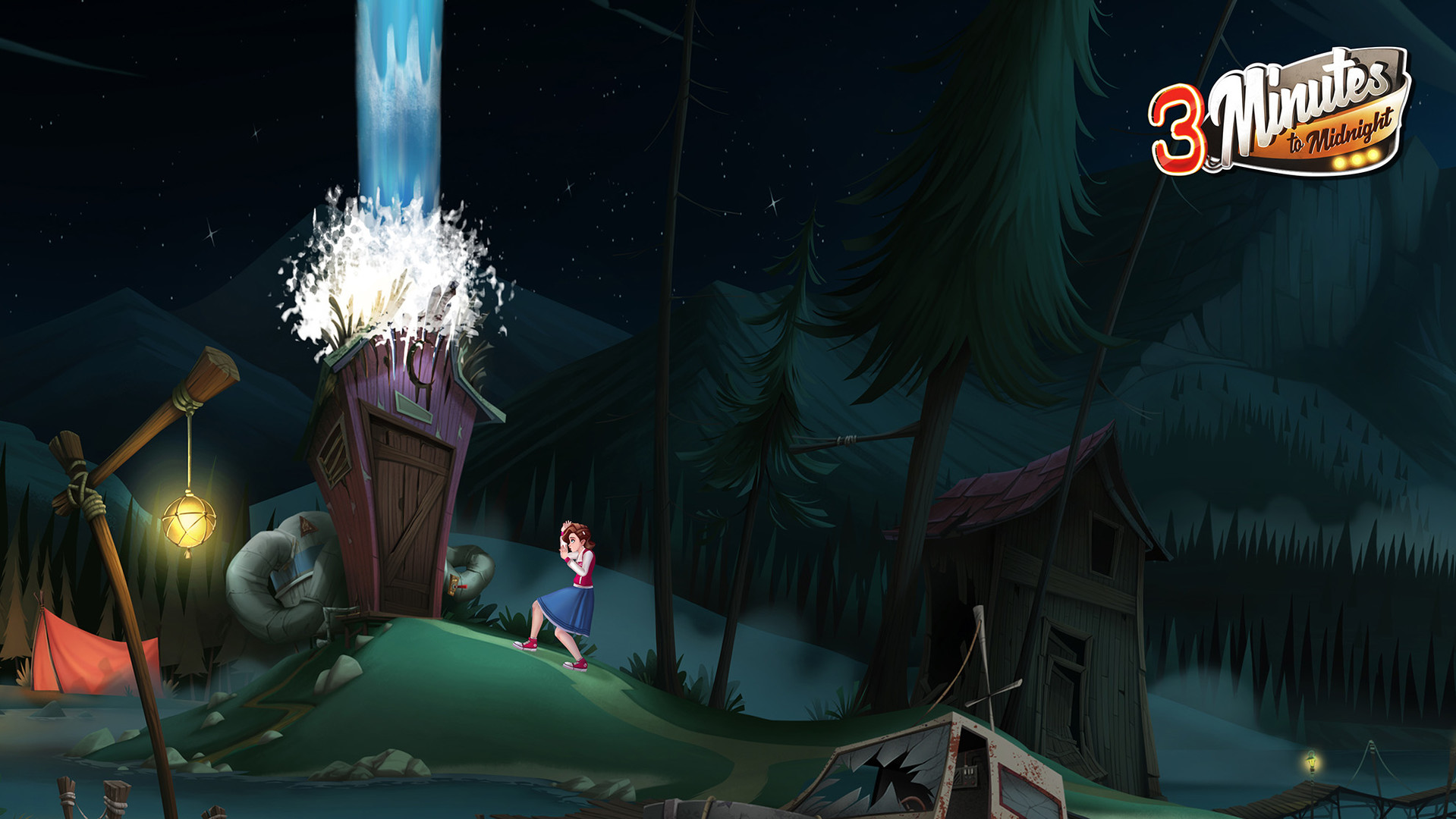 While demoing the title at PAX, I had a chance to speak with Jan Serra, game director on 3 Minutes to Midnight. We both talked about how disappointed we were in Broken Age and how the puzzles in 3 Minutes seem to be a better realization of what made classic point-and-clicks so engaging for fans. You won’t find super easy solutions or totally obvious clues, but puzzles that reward worldly knowledge.

For instance, the demo available took place in a secluded segment of the game’s second chapter. Wishing to avoid spoilers, this small slice of gameplay was completely devoid of context and relatively free of any character explanations. It took place in a camp named “Crystalline Lake” and tasked protagonist Betty Anderson with getting a key from the camp counselor, named Pam. Obviously asking her would be too easy, so I needed to scour the small area for some items to trick Pam into letting her guard down so I could get the key.

At one point, I was on a screen with the path blocked by a bunch of angry-ass mosquitos. Doubling back to the main camp, there’s a section on the left that contains citronella plants. If you know anything about bug spray, you’ll know that citronella is a prime ingredient for how it repels mosquitos. I went back to the mosquito gathering and noticed a candle on the table. There was a small grinder on the floor near the candle, so I fed the citronella plant in there, dipped the candle, and had my solution. 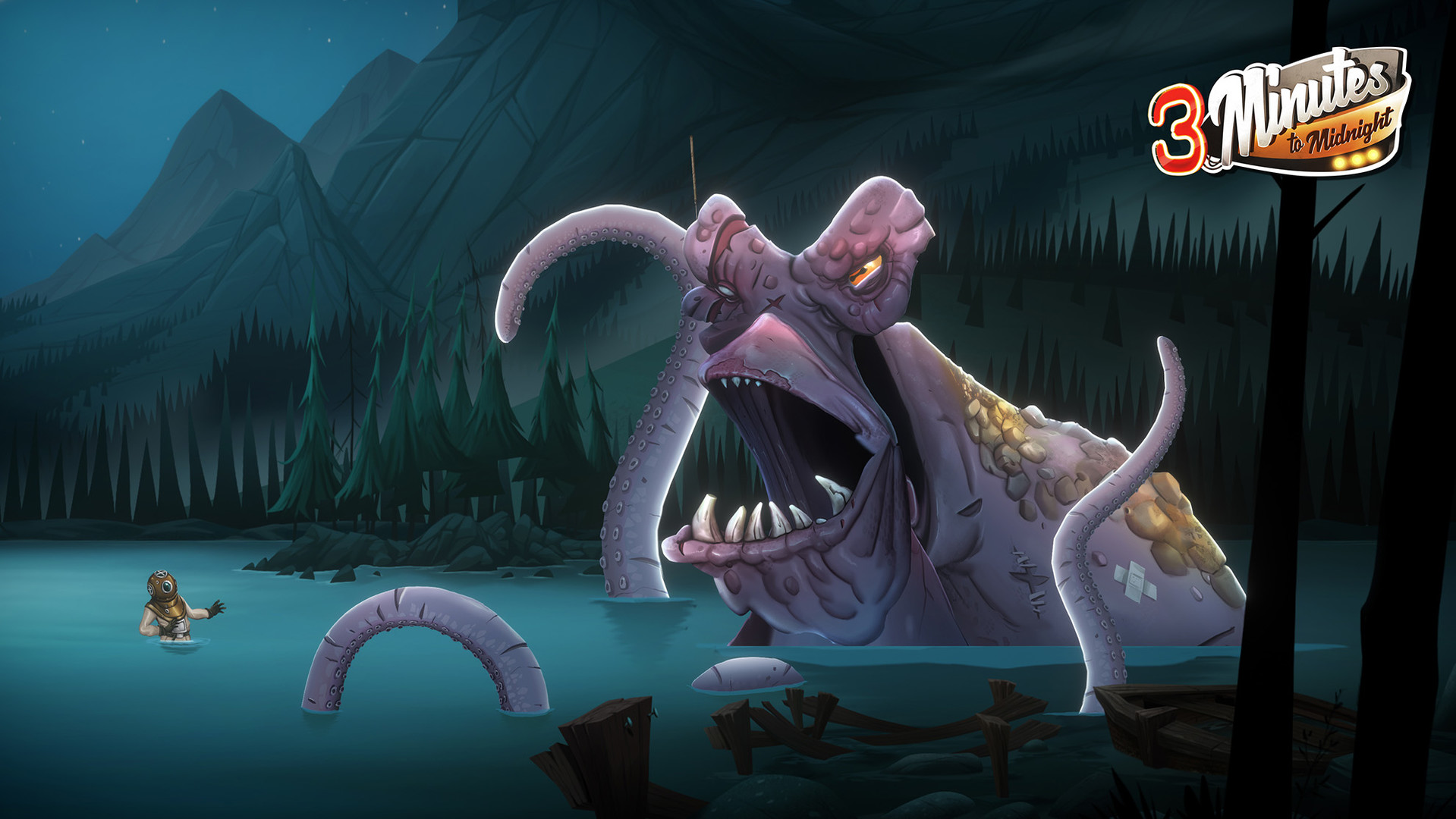 If you couldn’t figure that out, though, 3 Minutes to Midnight has a really organic way of informing the player about potential solutions. Instead of using a guide system like in the Monkey Island remake, talking to different characters multiple times or using an item incorrectly a few times will result in unique dialogue that should point you in the right direction. Giving another example from the demo, there is a point where I needed to use a plunger attached to a rope to drag a boat across the lake.

When you unsuccessfully throw the plunger, a diver in the lake comments that “You lack core strength.” While a little vague, it does clue you into the fact that simply hurling the object across the water isn’t going to cut it. I remembered from an earlier section that I had gotten Pam to bring out a fire extinguisher and there was some kind of shute available from a portapotty I exploded, so I figured combining all of that would MacGyver a plunger launcher together.

That isn’t to say the demo was perfect, because a few triggers for specific events didn’t work correctly. Getting the chute, for instance, tasks you with coaxing the diver out of the portapotty. I only spoke to him once and figured he wouldn’t have anything else to say, so I left. Turns out I needed to interact with him a bunch of times to initiate the sequence that would launch him from the toilet. This was more down to the game being a demo since Scarecrow Studios hasn’t put in enough lines of dialogue to aid lost players just yet. 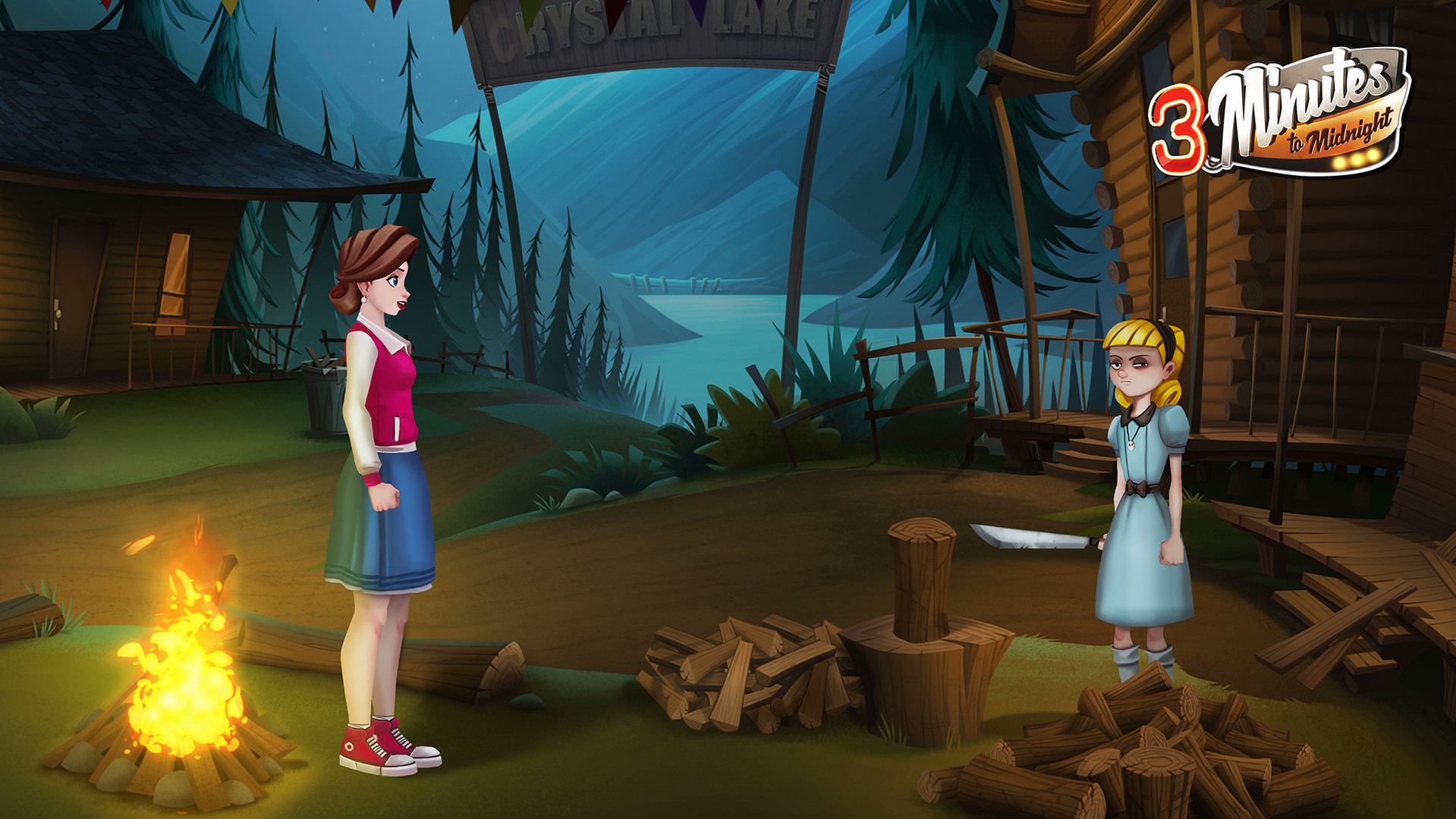 As Serra told me, the voice actress for Betty caught a cold a week before PAX, so they weren’t able to get her to record more lines for the demo. If she had, Betty would have likely stated that something fishy was going on in the portapotty. Little touches like that are something Serra prides himself on. As he explained to me, every NPC will have extra dialogue for convenience sake. Certain players will never see some of these interactions, but the goal with 3 Minutes to Midnight is to keep players engaged instead of frustrated. The answers won’t be obvious, but the verbal clues should be enough to point you in the right direction.

That is something I can appreciate, too. I can’t tell you how many classic games literally drop you when the going gets tough. I love Monkey Island as much as the next person, but who the hell ever thought to combine the rubber chicken and pulley together? On what planet does that kind of logic make sense? Serra laughed when I said that but was quick to point out that that kind of absurdist humor is what made LucasArts so popular. 3 Minutes to Midnight isn’t abandoning those kinds of solutions but will have better hints to guide players along. Really, that’s all you could ask for.

The humor of the game is right in line with LucasArts’ golden days. When you first speak to Pam, you quickly realize that she has multiple personality disorder. She starts holding a conversation with herself and Betty just sits there with a confused look on her face. Another character you can interact with is a raccoon and Betty will suggest a trade to get his fancy garbage for dinner. She then pauses and realizes she’s talking to an animal, noting that she’s going insane. 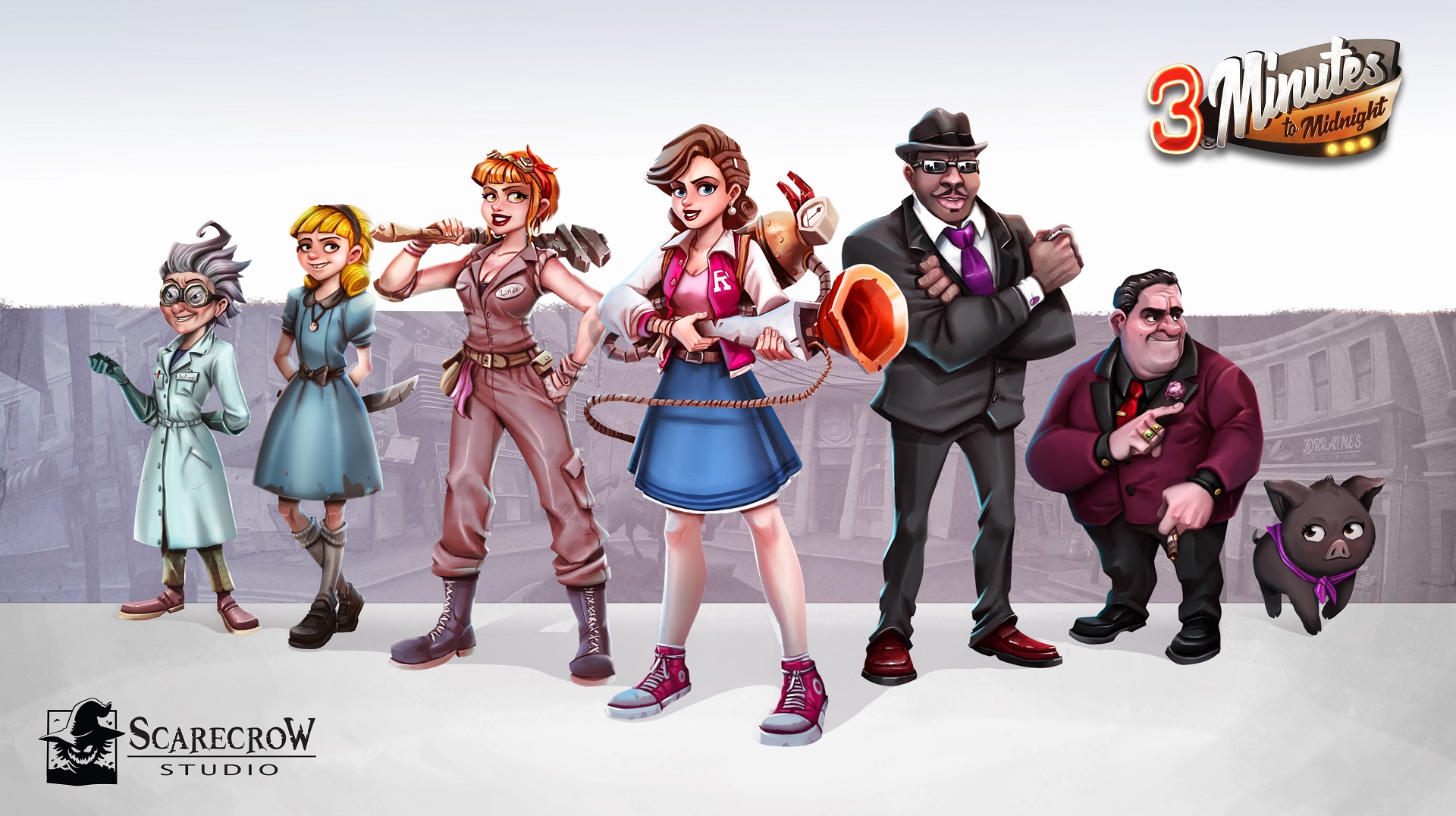 In a way, she reminds me of Guybrush Threepwood. She’s a bumbling idiot but somehow overcomes her own inadequacies to make progress. She’s also very affable, never getting bogged down or angry. It’s hard not to like her, even if you have no basis of comparison to classic adventure games.

If you’re a fan of those games, though, 3 Minutes to Midnight pays homage to them in a wonderful manner. Even the art style feels like an evolution of LucasArts titles, opting to go for hand-drawn HD sprites instead of pixel art. LucasArts may be long dead, but their spirit will live on when Scarecrow Studio releases the game later this year. It will launch on PC with ports coming to all major platforms sometime next year.