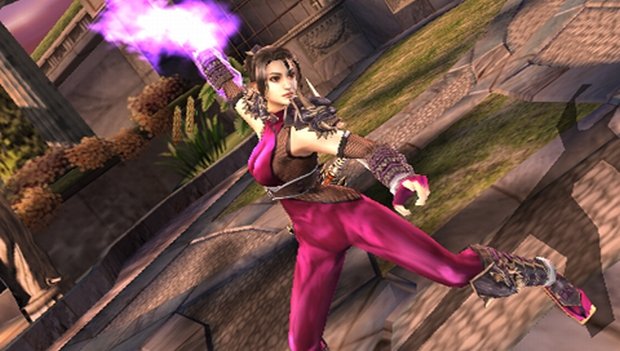 Did you hear? Soulcalibur is coming to the PSP! Soulcalibur: Broken Destiny is a new entry to the Soulcalibur franchise due out this Summer. It’s set to have over 20 characters (both old and new), an expanded character creation feature and a single-player mode crafted for the PSP.

It’s great seeing so many developers starting to really support the PSP again. Sadly, it’s starting to happen just as Sony is possibly about to abandon the UMD format due to the PSP Go!

Anyway, check out all the screens below. How’s it looking to you?

“This latest installment to the Soulcalibur universe continues the franchise’s tradition of delivering quality entertainment with addictive gameplay and stunning visuals,” said Todd Thorson, director of marketing and public relations, NAMCO BANDAI Games America. “Each iteration consistently offers a top notch fighting experience everyone expects from the acclaimed series and SOULCALIBUR: Broken Destiny for the PSP system is no exception.”

SOULCALIBUR: Broken Destiny preserves all the fierce battles and gorgeous visuals the series has been known for to create the most comprehensive fighting experience ever on a handheld system with highly responsive controls and balanced gameplay. Adding depth to the combat, an all new single player mode has been specifically crafted for the PSP system that not only challenges a player’s reflexes but also improves their fighting skills. Following in the footsteps of Soulcalibur® IV, Critical Finish Moves return where opponents can be defeated with one spectacular attack. Furthermore, the game’s character customization feature has been outfitted with even more options than ever before for infinite possibilities to create an original fighter or customize a favorite warrior.

SOULCALIBUR: Broken Destiny for the PSP system will be released in North America this summer.