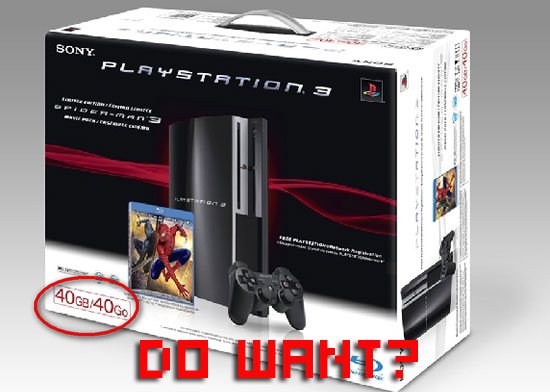 In wake of yesterdays rumor that Best Buy was phasing out all its remaining 80GB PlayStation 3s in favor of the crippled 40GB version comes word that another “unnamed retailer” has given the solemn nod that the writing on the wall is indeed more fact than fiction. To quote GameDaily’s source, “Something is afoot, but cannot be discussed any further until the remaining 80GB PS3s are gone.”

Why is Sony going from multiple SKUs to a single, no frills version of the PS3? If you ask Janco Partners analyst Mike Hickey, it has much to do with that scary “recession” word that’s been making heavy rotation on the news waves for a while:

“A recessionary environment will likely punctuate the 80GB version’s relative and absolute retail sales disappointment. The recently released 40GB version is getting traction at retail, suggesting backward compatibility takes a backseat to the console’s price point for current buyers.”

So where does Sony go from here? Are they going to introduce yet another confusing SKU to the market (with a larger hard drive), or just stick with the 40GB that sells — and makes those of us who cherish backwards compatibility continue to keep their PS2s connected to the entertainment center.

We’re not exactly sure if the sudden interest is due to the fact that the PS3 has finally started releasing “must have” games, the price cut, or both. We do know that you might want to think about purchasing one of those more expensive 80GB models while they still exist.

Failure to act now is only going to make it more painful, as the eBay auctioneers profit by your hesitation. The PS3 is a fantastic beast of a console (it doesn’t break every 2 months!), and wasn’t meant to be stripped of its features. You won’t regret spending the extra cash, and adding it to your collection.