If I say the word “Nintendo” to you, what’s the first thing you think of? If you’re a fan of their way of doing things, the chances are you’ll gush forth with reams of praise in regards to their innovative game design, sense of fun, and crusade to bring the joys of gaming closer to the masses.

If you’re one of their detractors, you’ll probably think that they’re actually holding gaming back in the mainstream through their perceived “kiddie” image and their historical slowness in pushing forward with new technology (Wiimote and DS exempt) and see them instead as little more than a quirky relic of the way the industry used to be.

Pioneers of downloadable content and new gaming media though? I doubt any of you would pipe up with that judgement. That’s Microsoft’s area after all. But you’d be wrong.

Hit the jump to find out why. 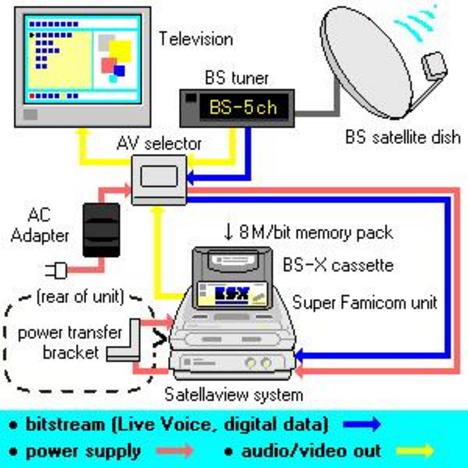 Little heard of in the West, the Satellaview, or BS-X, was an enhancement to the Super Famicom which allowed Japanese owners to download game demos, news and gaming tips to their machine and store them on a separate cartridge via a Super Gameboy style interface. With online connectivity unheard of in consoles at the time, the SF obviously lacked the necessary tools under the hood to do things in the way of today’s standard, so the device instead used a Japanese satellite broadcast system to get the information to machines.

Third party support was strong for the era, with Square (minus the Enix), Konami, Taito, and Data East pledging support, and if it had been successful, we’d now be living in a gaming climate where the kind of advancements offered by XBLA, the VC, and the PlayStation 3 Network had been a standard part of gamer culture for the last decade.

So why aren’t we?

Well the simple truth is that the Satellaview was another of Nintendo’s early innovations that came along before the technology or the audience was ready for it. In the absence of the capability for an online network, the satellite system seemed the obvious next best solution, but in practice there were fundamental flaws.

Without the option of true downloads as we know them now, there were specific windows of time during the day, usually in the early evening, when content was broadcast, making the process more like sitting in front of your TV and taping a show. Some games even had to be played “live”, only accessible during the broadcast window, after which players had to wait for the next week’s instalment.

This awkwardness of acquiring content brought about a major problem, not only bringing about potential frustrations for gamers, but making sure that the advertisers Nintendo were relying on to pay for the free service weren’t reaching their target audience anywhere near as much as could have been possible. With the satellite channel Nintendo used broadcasting standard TV outside of the gaming window, things ever expanded, and despite the broadcasts lasting until June of 2000, only Square and Nintendo ever produced games for the system.

It’s a massive shame that we have to look back on this one now and wonder what might have been. If it had been successful, who knows what new gaming innovations we’d now be lauding instead of XBLA? Satellaview games used early versions of a great many current day gaming conventions, and it’s tantalizing in the extreme to think about where these would have led us if the system had taken off worldwide.

Some games, such as BS Zelda, were early examples of downloadable content, released weekly with a bigger world map available each time. Other games made use of the system’s real-time clock, allowing players to “rent” items and power-ups for limited periods. The system’s interface even used an Animal Crossing style town which players navigated using a pre-Mii personalised avatar. But alas, things went the way they did, and the Satellaview joined the ranks of the Virtual Boy and the NES floppy drive in Nintendo’s archive of the “not quite there”.

Aside from being an interesting piece of gaming history, I think the Satellaview sums up a hell of a lot about what used to be wrong with the big N (or still is, if that’s the way you see them). During the Yamauchi era, there were times when the company got so drunk with the need to innovate that they were too busy dancing on the bar in their underwear to realise they’d left their critical faculties at home.

While I adore them for every success they’ve had through their admirable take on gaming, there was a period when for every Game Boy, N64 pad, rumble pak or Super Mario 64, there was a ROB, a Virtual Boy or a messed up Sony deal just waiting to make them look less clever. And it always, always came about as a result of them having a cool new idea but running in to embrace it before they’d fully thought it through.

It shouldn’t come as any surprise when I tell you that despite long term Nintendo-love, I was terrified for a while when the DS was announced. Thankfully though, the way that machine has been handled sums up just how far they’ve come under Iwata since the shaky days when the rigid thinking of their previous fearless leader looked set to send them under. 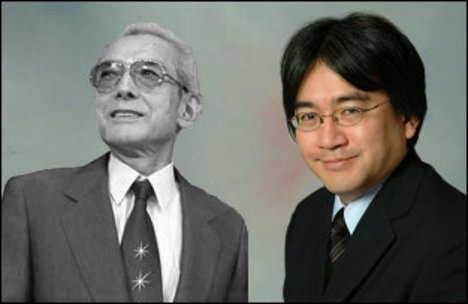 But that progress leads me on to my final point about the Satellaview, because there’s an irony here that can’t be ignored once all things are considered. Why, now that the company has a more chilled out and modern-thinking boss, has the history of the Satellaview not been considered in terms of inspiration for their online strategy? I know that Nintendo has often liked to see itself as the quiet guy in the corner, happily inventing away and not kicking up a fuss when other companies “draw inspiration” from its ideas, but in this Miyamoto and Reggie led era of outspoken credit-taking, the fact that they’re at least superficially shy about a concept that they did first is utterly confounding.

Who knows, maybe the failed Satellaview is actually the shadowy explanation for their slowness to make the most of the VC. Maybe there’s some wounded pride at the fact that, for the first time, another company has made one of their ideas work before them.

Or perhaps it’s just good old fashioned, “once bitten, twice shy” paranoia relating to the obscure peripheral. Either way, it’s about time they got over their issues and brought the balls they’ve shown with the Wii and DS online. Things have moved on a lot. They’ve got their innovation-lust working for them these days, and I can’t see them failing if they’ll just channel some of that old Yamauchi spirit into their new ideas.

And if they can bring the Satellaview exclusive Chrono Trigger sequel to the VC in the process, I’ll love them like brothers.