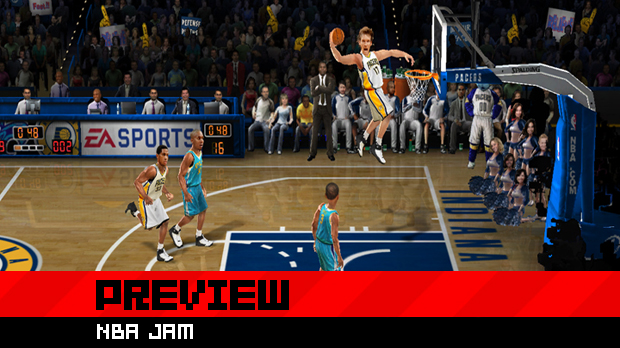 Growing up in the days of the Super Nintendo was a huge blessing for me. I love Nintendo’s second videogame console with all of my heart and still believe it to be one of the best systems ever made. Many cartridges went through my Super Nintendo and none left a mark on my mind as NBA Jam: Tournament Edition did.

Fast forward to 2010 and the NBA Jam series has been brought back from the dead. NBA Jam is on a Nintendo console once again and in the hands of a formal rival company, Electronic Arts. I previewed the game earlier this month and I can say that the new NBA Jam made me feel just like a kid again.

Boom shaka laka after the break for more on the new Jam.

NBA Jam fans, you’re the reason a new entry to the series has been made. The fan outcry was the driving force behind EA’s decision to greenlight the project at all. NBA Jam is all about the fans of the original and the team at EA Canada made sure to stay true to the Jam roots through the game’s Classic Campaign mode.

Players will be in control of two-man teams as they go up against other teams. I used the Nunchuck and Wiimote combo, but you will be able to just use the Wiimote or the Classic controller as well. You’ll be able to perform turbos, steal balls, spin and shove others around in the no-holds barged game of basketball. To shoot your ball you’ll move the Wiimote upward and then move the controller down to either shoot the ball or do a lay up.

The visual style remains true to the series as the player animations keep the quirkiness of the franchise intact. Players’ bodies are rendered in 3D while the heads are shown off in 2D. The head and body move independently of each other, and it’s a hoot to see the players running around the court. 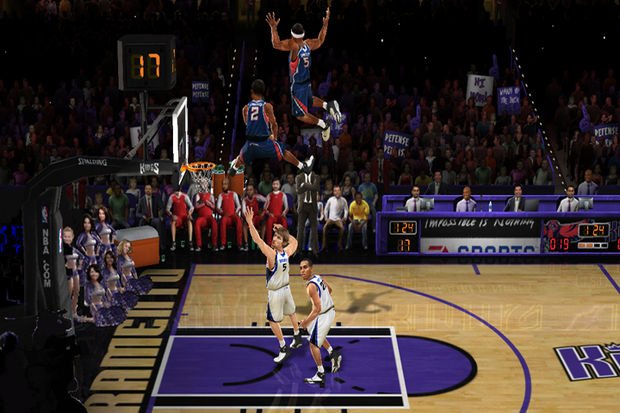 While purists will be pleased with the classic mode, there’s also the Remix Tour mode for those looking for something more. The remix mode will offer a ton of new features — such as a boss battle mode featuring legendary NBA players — but EA won’t be going into detail about the new stuff just yet.

NBA Jam supports four players, but as of right now, multiplayer is limited to local play. EA isn’t ruling out online multiplayer just yet, so fingers crossed that online makes it into the final game. Either way, NBA Jam is one of those games that you really want to play with others in the same room.

I played a few rounds during the preview event and the smile on my face never left me. My cheeks were hurting by the time I stopped! NBA Jam is about having a good time and EA Canada certainly has certainly achieved that feeling.