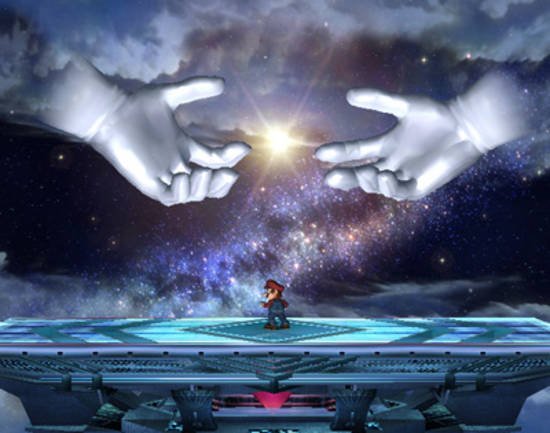 The DOJO week started off with the return of Master and Crazy Hand. They will be the final bosses of Classic mode and look to be more annoying than ever. I’ve always thought they never really fit into the whole Smash story. On Tuesday, Pikachu’s and Samus’s Special moves were shown off. Wednesday brought light to the Clear % display that shows up on the Subspace Emissary. Opening doors, clearing stages, getting trophies and several other factors all contribute to the Clear percentage.

Today’s update showed off the new level based on the Pokemon Dialga and Palkia. The stage has a lot of things that can happen to it such as the ground breaking away, lasers coming down from the sky to the entire level doing a 180 flip.

Hit the jump for Thursday’s update unless you don’t want to get spoiled!

The Pokemon Lucario is a new playable character. He’s very similar to Mewtwo’s fighting style from Melee. The unique think about Lucario is that the more damage he has, the stronger his attacks are. This will make for some interesting fight strategies. Do you pick up the health item or do you ignore it? His Final Smash looks awesome too.