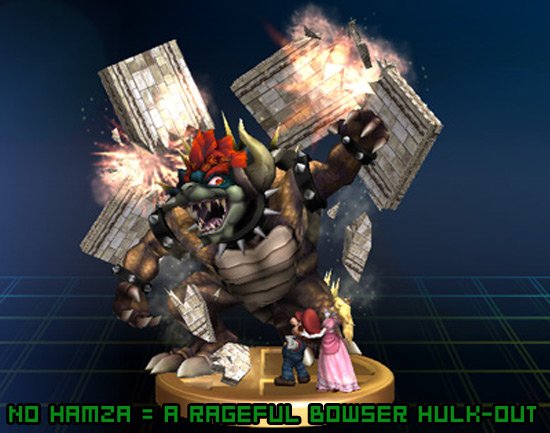 Hamza couldn’t make it this week, something about turning 18 and a ritual initiation into adulthood on the Isle of Lesbos. So in Hamza’s place is the first ever Jonathan “I laugh at those who believe Smash Bros. Brawl news will ever stop” Holmes edition of the Dojo recap. Hit minute 2:25 of the link for it’s relevance to my new in-quotes nickname, and/or hit the jump at the bottom there for the relevant content to this post.

Monday started off just fine with a profile of Wolf, of one of Brawl‘s most controversial new characters. It turns out he’s not the Fox clone many initially accused him of being. Even his Landmaster is a little different from Falco’s and Fox’s. But still, there is no question that Mega Man should have had Wolf’s spot on the roster. However, that’s not just true of Wolf, but also of just about ever character in Brawl. I’m just picking on him because he’s a furry.

Tuesday brought a detailed explanation of Toon Link’s home turf, the pirate ship stage. For my money, this and PictoChat are the most consistently interesting Smash Bros. stages ever. Neither are as gimmicky as Poke’ Floats or Spear Pillar, nor as boring as Battlefield of Bridge of Eldin, but instead have just the right balance of random elements and stability. Bravo.

Wednesday’s update explained All Star mode. Apparently the order that you fight your opponents in All Star correlates with the chronological order said opponent’s games were released, starting with Game and Watch, and ending with Pikmin. It’s always interesting to see the method to Sakurai’s madness. Plus, he throws in a snide comment at the end of the post about Nintendo’s recent lack of character driven IP’s. Sakurai hates Nintendo so much these days, you can almost taste it.

Thursday was all about music, featuring a full reveal of all the obtainable songs on Brawl‘s enormous soundtrack. It’s a good guide for anyone on the quest to “catch ’em all” Brawl style and obtain all of the game’s unlockable content. What I really want to know is why there are 20+ songs on the Brawl disk that you can’t unlock. I wonder if Sakurai will ever explain that decision?

Finally, today’s update brought us the revelation of the rewards for beating All Star mode, a trophy depicting your character’s Final Smash. Umm…yeah. Speaking as a hardcore Smash Bros. fanboy, even I was underwhelmed with this update. Maybe if I lived in Europe, I would have found it more interesting.

How about you guys? Learn anything new this week?