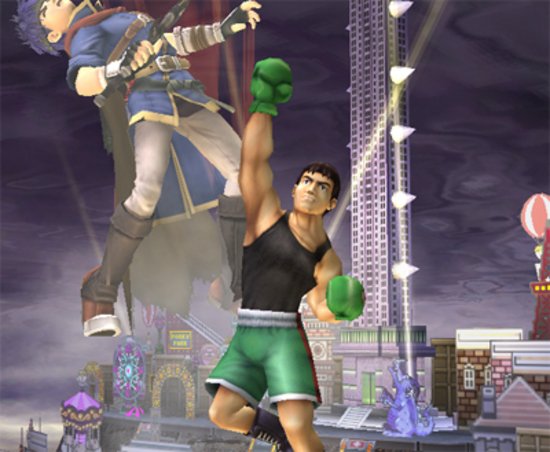 Sorry for the delay, I’ll just go through all the updates as fast as Internetly possible. Monday started off with a new map called New Pork City. This is the biggest map that has ever been in a Smash game to date. Tuesday revealed the old Home-Run Contest is returning. It’s still the same concept, but two new additions have been added. First, the Sandbag can’t fall off the platform anymore thanks to the shield on the platform. The other edition is that two people can play together in this mini-game, offline or online.

Wednesday brought a how to guide on using the Wiimote to play Smash. I’d rather not go into detail on this since I personnaly believe that the Wiimote is horrible to use for Brawl (especially playing it again at E For All). Meowth was also shown on Wednesday making his comeback from the original Smash. New Assit Trophy Little Mac was revealed on Thursday. He runs around the stage beating the crap out of anyone that comes near him. The final update of last week was on Peach’s Final Smash. She makes everyone on the stage fall asleep and dozens of peaches appear on the map.

So who here that went to E For All last week played some Brawl? What did you all think about it?