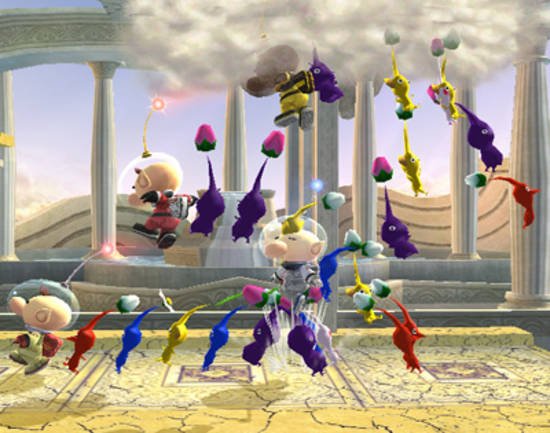 The DOJO week started off with the return of more old stages from Melee. Yoshi’s Island, Corneria, Onett, Brinstar, and Rainbow Ride all make it back to Brawl. Tuesday revealed the updated Multi-Man Brawl mode. This time, the fighters are known as the Fighting Alloy Team which consist of Red, Blue, Yellow and Green Alloy fighters. There will also be Co-op Multi-Man fights this time too. We all already know Wednesday’s update, but just in case you missed it, Pikmin and Captain Olimar from the Pikmin series will be playable characters in Brawl. Olimar’s stage music was also revealed.

On Thursday, Snake’s Final Smash was shown off. Snake calls in a helicopter which takes him away from the battlefield. He hangs off a rope ladder and shoots at the map with a Grenade Launcher. You only have 12 rounds so you need to try and shoot them all off before the Final Smash runs out.

Today’s update continues on the big news from Wednesday showing off Pikmin & Olimar’s Special Moves. Olimar’s standard special move allows him to pick Pikmin up out of the ground. You can have up to six Pikmin with you and certain Pikmin will appear more often in certain areas of the map. Each Pikmin will offer different attack styles which you can read up at the DOJO. Otherwise, Olimar will throw Pikmin with his side special move. Olimar’s up special is called Pikmin Chain, which makes the Pikmin turn into a whip, more or less. The down special is Pikmin Order and this makes the Pikmin go back to Olimar and also allows you to change the order the Pikmin are when they’re in line.

What did you think of the Smash updates this week? An all out Captain Olimar battle looks like it could get confusing pretty fast.