Permission to come aboard skipper

Warframe dropped its Empyrean update, first for PC during The Game Awards and then a week later for PS4 and Xbox One. Like many of my experiences with new Warframe content, it is buggy as hell, but it hit the promised December 2019 release in time as a sort of Christmas gift for Tenno players. While it could’ve released in the new year after some more time in the oven, the railjack experience right now is a fun, hot mess. There are a lot of technical problems with Empyrean, but damn if I don’t want to jump back in as a skipper and gun down some spacefighters.

This is a primer for starting your railjack experience in the first area, Earth Proxima. There is a lot to go over in terms of the mechanics and menus, but learning the new lexicon and UI is a steady process compared to getting thrown into the fire that is manning a railjack meant for four. For now, this primer is mostly to guide your first experience of being inside a railjack and completing missions without blowing it up. 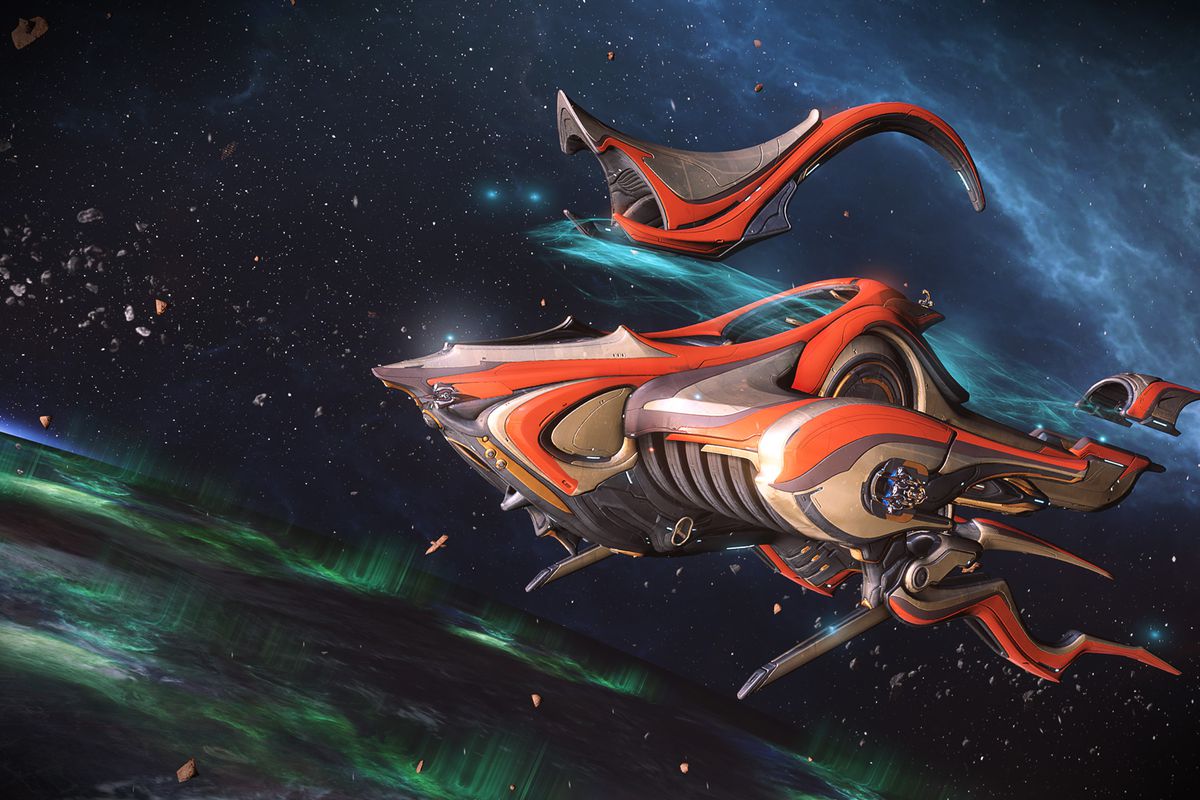 Building a railjack is a whole quest line called Rising Tide. Only players who have completed The Second Dream quest can reach this portion of the game and start the process of building their ship. If you just want to partake in the Empyrean expansion without owning a railjack, you simply need to complete an earlier quest, The Archwing. With an archwing, you can join another railjack crew from the new star chart map.

The crew of a railjack in its most efficient form comprises of three positions: the pilot, the vanguard, and the ship hand. This is from my personal experience, both positive and negative. Two ship hands get nothing done but fixing a ship dead in the water. If everyone leaves on vanguard duty then the ship will get raked over the coals with the pilot alone in the ship.

The pilot flies the ship. They’re responsible for keeping it moving because despite taking a lot of enemy fire, a moving target is still doing better than a stationary one. The pilot, in my experience, has first dibs on using offensive firepower such as using the flux energy for a seeker volley or using munitions for ordinance. Unless the situation is dire, the pilot shouldn’t be expected to constantly be getting out of his seat to help. The railjack is also your moving home base because enemy flak is powerful and shreds archwings quickly. You’re not just piloting to avoid enemy fire but also moving the ship into position so that boarding parties can safely infiltrate bases and use the slingshot to attack crew ships. 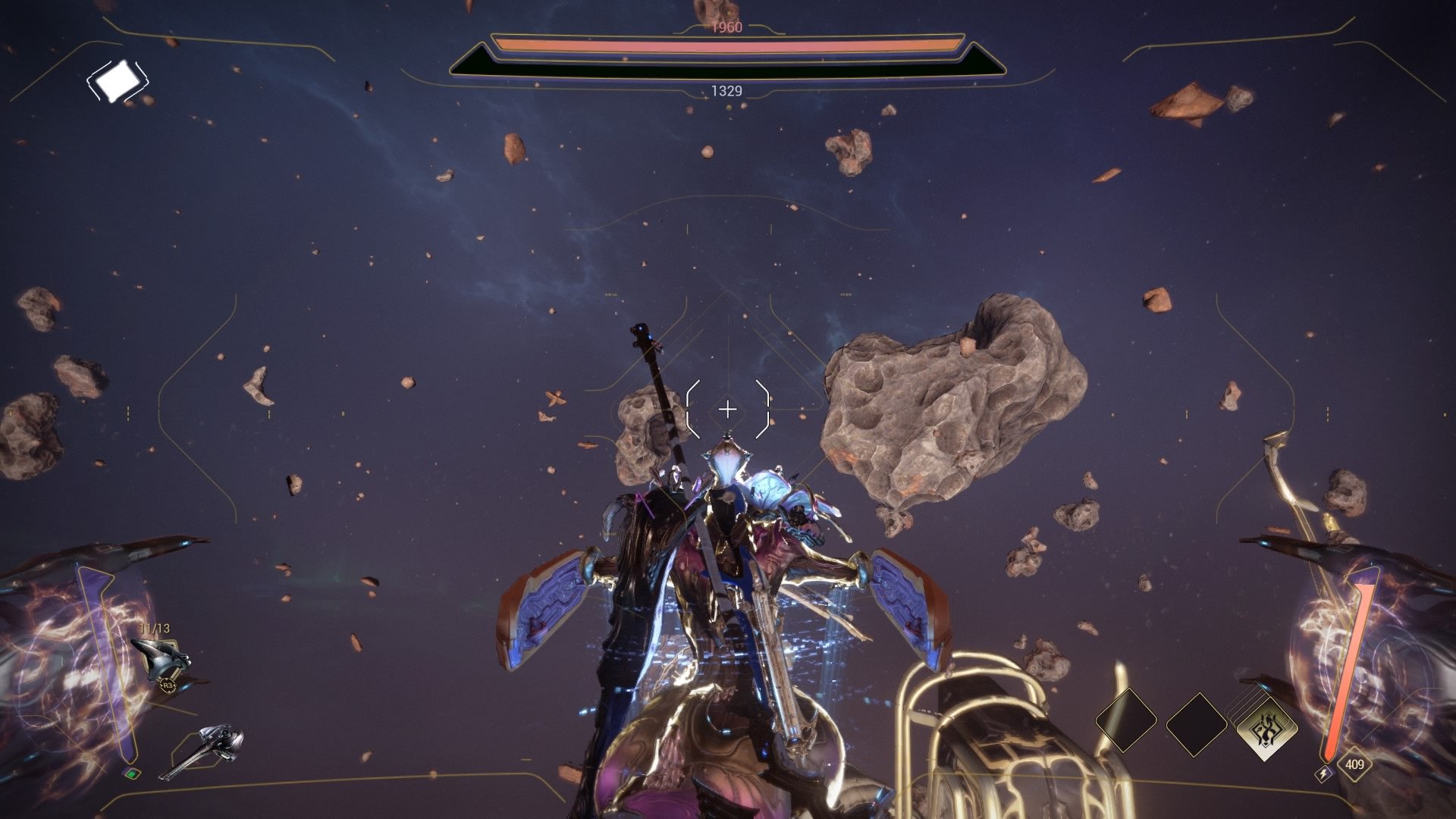 The vanguard is my special name for the boarding party. A mission in Empyrean isn’t just on the railjack but all through the expanse of space. Sometimes you’ll need to put on your archwing to sabotage firing platforms, disable antennae arrays, and most frequently to board heavily armored crew ships to destroy them from the inside out. The vanguard is a flexing position that will probably take a gunner’s seat to thin out the snub fighters until the time arrives they need to fly out and do their job.

The ship hand is the catch-all term for the person who is not piloting the ship but instead taking care of it. While you could say this is the engineer, patching hull ruptures and otherwise fixing the ship, they should also be on the guns when everything is in working order. They should be repelling boarding parties when they crash into your ship. They should be at your forge crafting more consumables. The crew is putting their faith in a competent ship hand to keep the ship afloat while they focus on their own jobs. Unless the pilot parks the railjack behind an asteroid for cover and help out, ship safety and upkeep will be on this person.

Speaking of the engineer, every time you join a railjack you’ll find a new tool in your gear wheel, the omni. This device is your all-purpose railjack repair device, sealing ruptures and breachs, putting out fires, and fixing broken wires. Breaks in the hull are fixed by tracing the line of the rupture, sealing it. Fires and live wires are fixed by filling a gauge and stopping over the marked brackets. Every repair job costs 10 revolite except for hull breaches marked for catastrophic failure, which cost 30. It’s important to keep track of your revolite because you don’t want to run out right when you need it most.

The typical railjack mission consists of the piloting the ship into dogfighting fighters to start. Once more fighters and crew ships jump in, it’s time to start kiting enemies around asteroids and other cover to reduce the number of firing angles on the ship. The gunners should be present to help thin the herd until crew ships begin to approach you. Then it’s time for the vanguard to leave on seek-and-destroy for crew ships. They need to board crew ships from behind and destroy their reactor, then escape and return to the railjack before it blows. In an ideal situation, one boarder focuses on destroying crew ships one at a time so that everyone else doesn’t have to worry about the heavy artillery these ships bring to the table. The pilot may also need to divert some speed towards picking up dropped enemy loot, because you’ll need some of the loot to feed your engineer resources to craft more consumables like revolite. Vanguards can also help in collecting loot since drops are collected as a squad, but they just need to be mindful to not get blown out of the sky doing so.

It’s common courtesy at the end of every mission for the crew to scour the vicinity for any loot they missed picking up. The last thing that needs to happen before formally jumping the ship out of the mission via the navigation is to top off the ship’s consumables, then hit the refine button to remove the materials from the ship and into your mission rewards. Depending on your pubbing experience, you may play with people who want to strip mine the level for more material, but I find that boring and tedious and simply ask politely in chat if what we’ve picked up is enough so that we can jump to dry dock. 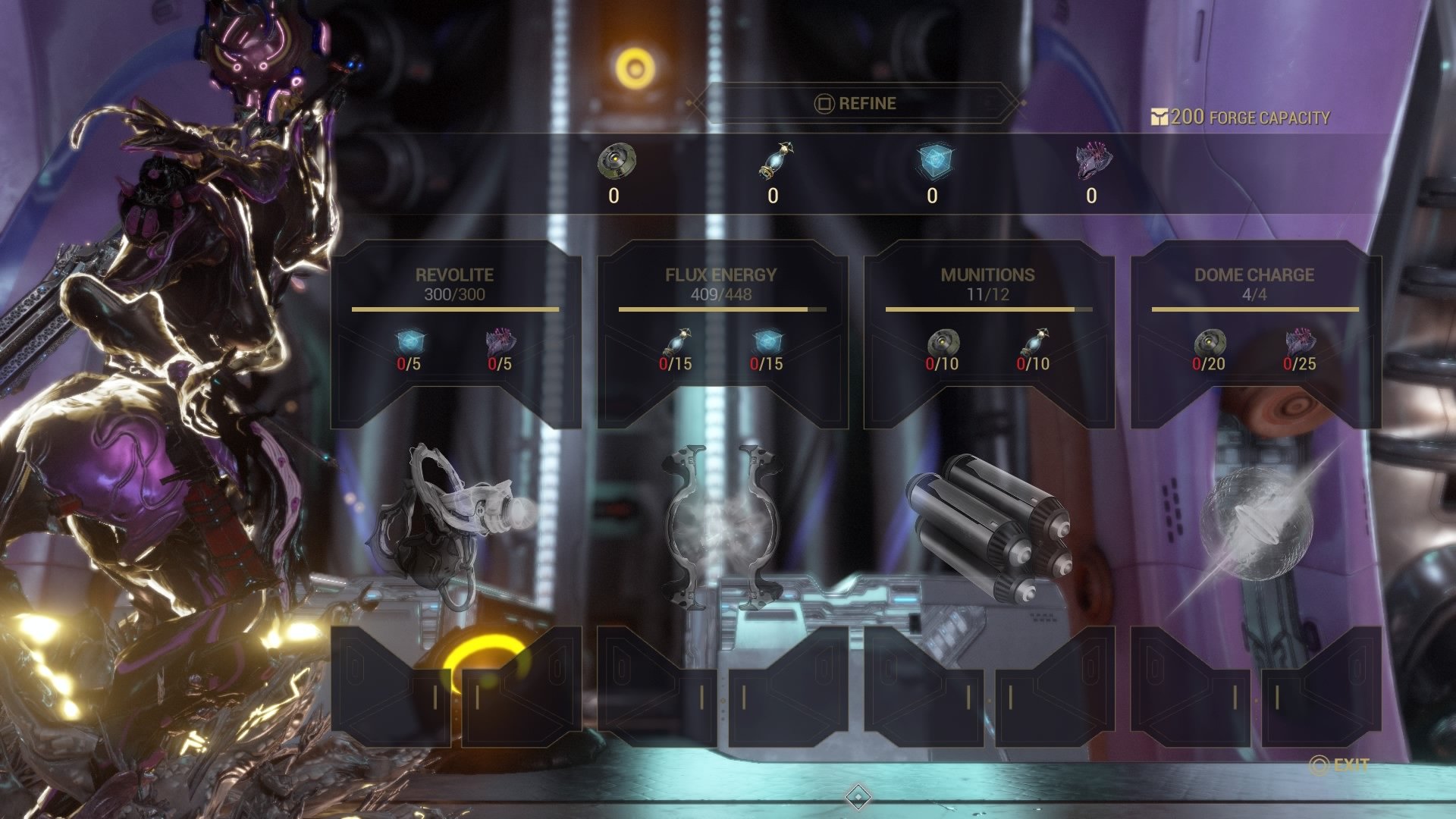 Later on, in the mission nodes, you’ll get additional objectives on top of skirmishing with fighters and crew ships. These objectives almost exclusively tend to involve flying archwing to board space stations and other enemy platforms for acts of sabotage which usually involve weakening it so that the railjack can attack it from the outside, requiring a fair bit of coordination. Once you get to this point, the most efficient method is two people on the railjack, one person making rounds destroying crew ships, and one person bee-lining the objective because objectives almost always present an additional wrinkle like buffing enemy ships or firing powerful artillery at you.

Those are the basic ideas behind railjack missions, but there is one last thing to cover: intrinsics, or player-specific skills that allow you to bring out the full potential of your railjack, unrelated to the Warframe you’ve picked. The intrinsic skills are tactical, piloting, gunnery, and engineering presently, with commandeering coming in 2020. Intrinsics are earned the same way you earn affinity normally, just specifically for railjack missions, and it takes twice as many points to hit the next level. So level one takes one intrinsic point, level two takes two, and the next is four, and so on. There are a wide array of skills to pick up on, but there are quite a few that are pretty vital to making your railjack experience smoother and easier. I feel there is also an upgrade path you should take before you consider specializing your points into any one area.

Your first concern is getting all your intrinsics to level 1, as the point cost is cheap and it opens up a lot of basic functionality. Tactical 1 allows you to bring up the tactical menu (default binding for consoles is the ability button plus left on the d-pad). At level 1 it doesn’t come with much but it does allow you to use tactical avionic abilities like fire suppression. It also lets you see what roles your crew members are filling to help you better decide where to put your talents. The menu also allows you to tell Cephalon Cy to relay orders to context-sensitive crew members, such as repair the ship, man the guns, or scuttle an enemy crew ship. 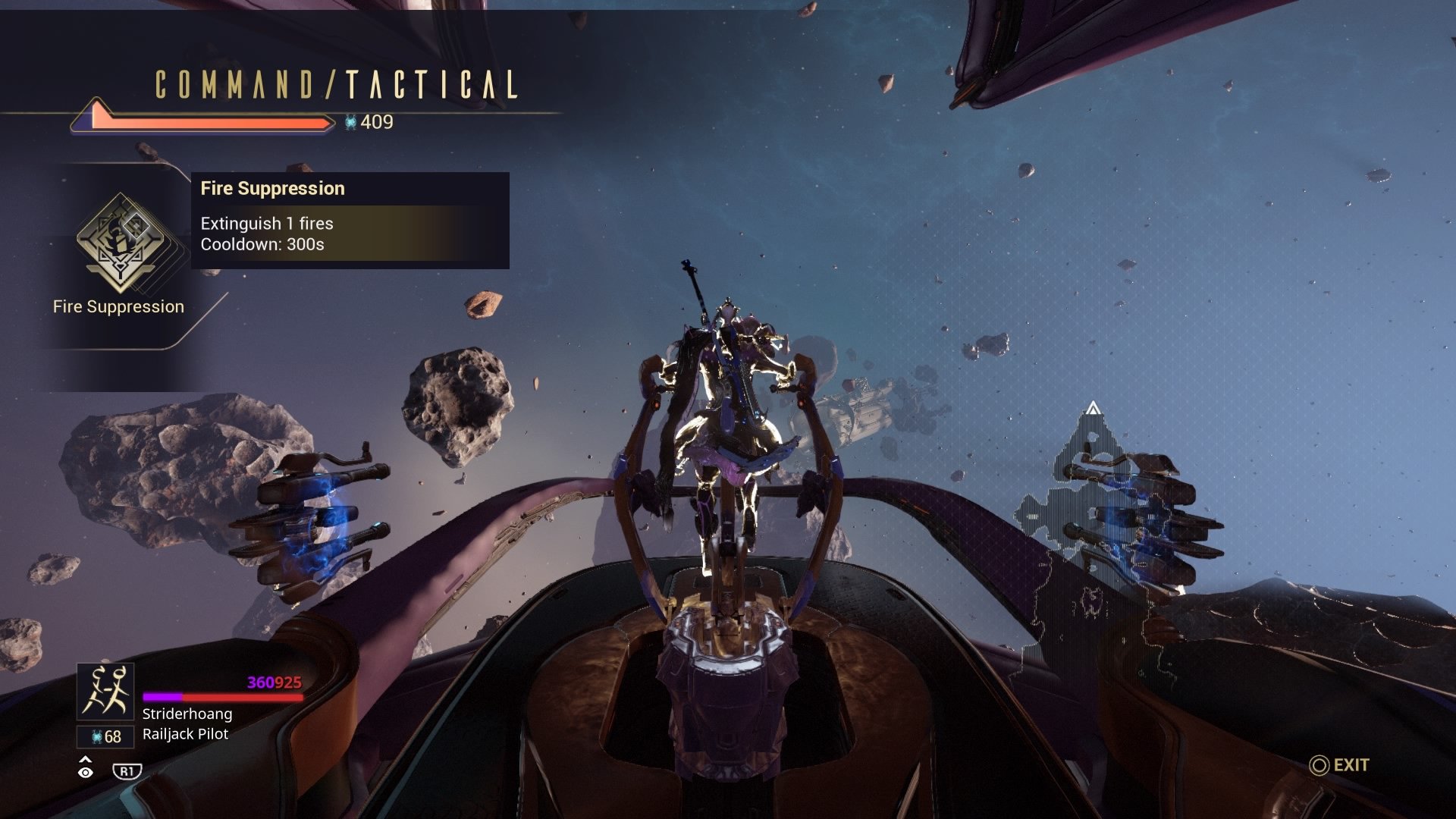 Next is getting gunnery to level 3. Level 1 gives you a lead target reticule, which helps turrets with travel time lead their shots. Level 2 turns your gunner seat from a window view to a full 360-degree view. This is important because it allows one gunner to be more effective in helping the pilot shoot down enemies. Level 3 gives you access to the slingshot, located atop the railjack. The slingshot is key to making most boarding attempts safer, as it propels you towards your intended targets quickly and makes you more difficult to hurt while in flight. It can shoot you at locked on crew ships, or you can charge the shot into space and aim for the entrance of a mission objective.

After you get gunnery to level 3, you should get tactical up to level 4. Level 2 allows you to deploy Warframe abilities remotely on the railjack to assist. Level 3 lets you fast travel on the railjack, which is especially useful for reaching the forge quickly. Level 4 allows you to railjack recall, teleporting from anywhere outside the ship, back to it. Once you have this skill, you can then perform any of the basic duties I described above and flex into any role as the situation demands. Now that you can perform any of the basic duties, you can choose to specialize your intrinsic points into an area you’re interested in. Do you want to be a pilot? The pilot intrinsics will unlock more maneuvers like boost, vector, and drift. Want to be the ship engineer? Additional ranks in engineering allow you to craft specialized consumables during combat, including the dome charges for your powerful forward artillery. 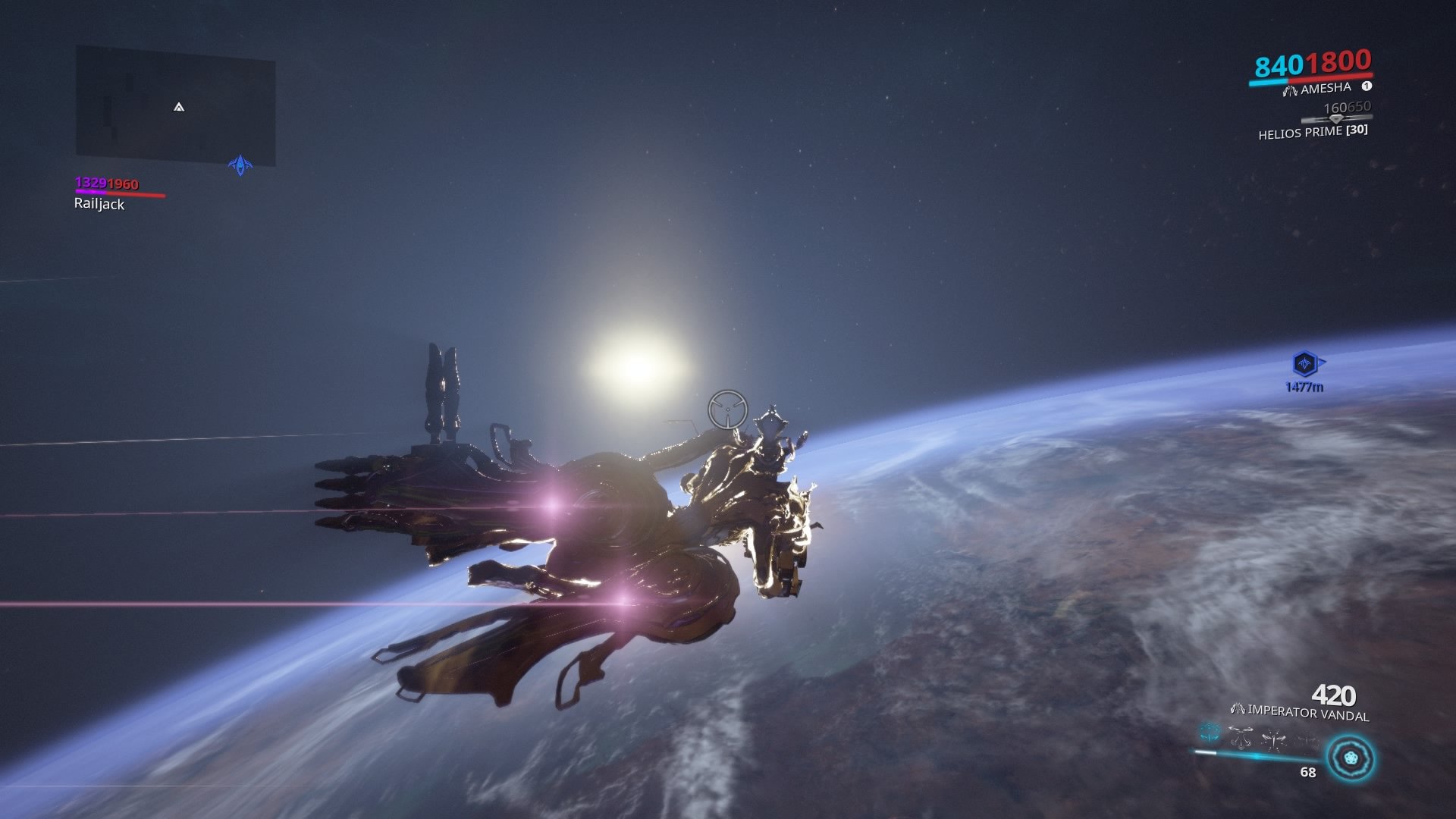 For most of your time on Earth, you will get by on the simplest of equipment. You’ll probably spend extra time on Earth farming materials until you have a few decent upgrades and avionics to really pierce into the next node, Saturn Proxima, where things get exponentially tougher. When you leave for Saturn, you may explore additional information being shared by Tenno such as the most effective turrets to use and good Warframes with abilities that help you during railjack missions. But for now, this may help get your bearings as you start Empyrean.