When the Neo Geo Mini launched last year, a lot was said about how poor the controls were. While the original Neo Geo hardware has some of the finest gamepads you’ll ever experience – even if the button layout is a little odd – SNK dropped the ball in terms of control options for its Mini console. The gamepads looked the part but felt like cheap knock-offs you’d find at a dollar store.

People were also disappointed with the system’s HDMI output. While the included screen had the correct aspect ratio and was relatively clean, putting the device out to your television made everything look like it was smeared with Vaseline. Worse still, none of the included options really helped things, with smoothing selections distorting the pixels and no option to play in a pixel-perfect mode.

So here were are roughly nine months later and a new Samurai Shodown-themed variant of the Neo Geo Mini is available. The expectation, apart from an altered list of pre-included games, was that some of the issues from the previous model would be fixed for this new one. Did any of the complaints noted last year get improved?

Sadly, no, but this bundle at least contains a hell of a game selection. 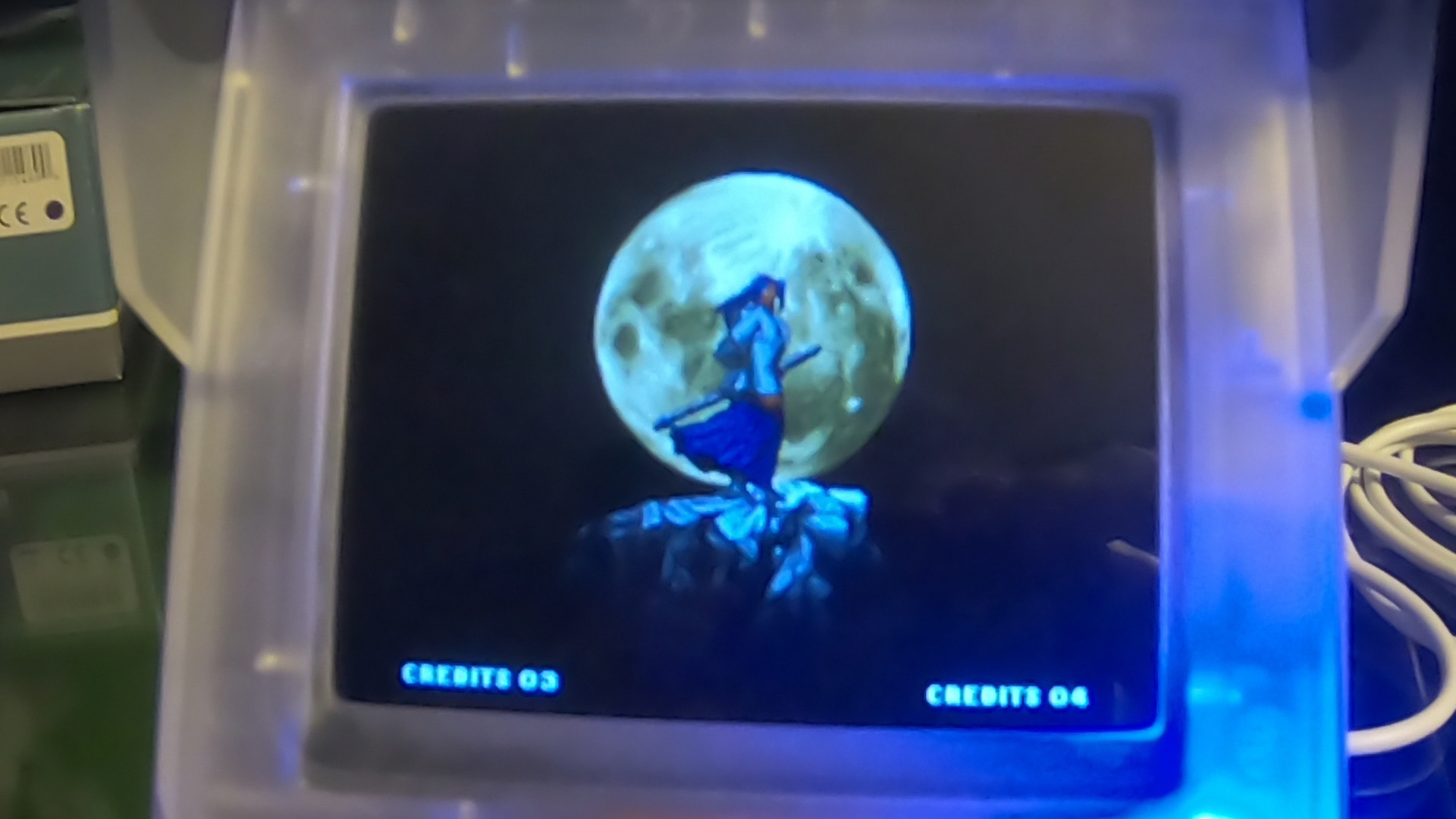 If you’d like to read our review of the original unit, you can check out Jonathan Holmes’ impressions from last November. He walked away relatively happy with the experience and even tested the Neo Geo Mini in a few scenarios I would have never thought of. As for me, I’m not 100% thrilled with how this device turned out.

Getting the good out of the way, the build quality here is nice. While the lack of micro-switches in the controllers is still mind-boggling, everything feels of good build quality. The buttons are a bit loud, but they don’t appear to be cheaply made. You can smash those damn things in Metal Slug or King of Fighters 98 and not feel like you’re dropping inputs. The joystick on the device, itself, is way too imprecise to pull off much, but it isn’t flimsy or cheap feeling.

I’m also really impressed with the included screen. You need to see it in person to believe it for yourself, but this could be one of the best LCD screens ever used on a mini retro console. The 4:3 aspect ratio retains the original look of each game and it almost has a CRT kind of filter that presents everything as it would have been seen in the ’90s. The built-in speakers are tinny and overly harsh, but an included headphone jack allows you to output to a stereo to get cleaner audio. You can even plug in the included gamepads for use in “handheld” mode, which kind of remedies the joystick issue.

As with the previous model, 40 games are pre-installed and swapping between them is relatively easy. The model I had for testing was a Japanese version, but the console allows you to change language settings fairly easily. The games, themselves, are of the Japanese MVS variants, so not every title has the option of an English translation (though they do provide button remapping). Even without English, nothing contained here is so obtuse as to confuse the hell out of you.

The menu is laid out in an odd fashion, but you’ll simply scroll left or right and select your game with a simple press of the A button. Pressing both Start and Select together brings up the console’s built-in menu with options to create save states, turn up or down the brightness, lower or raise the volume (in handheld mode), or change graphical settings (for TV play).

Regardless of what settings you choose, though, TV play is just not very good. The graphics come out way too soft and there seems to be something up with the gamma. Nothing looks all that great and it’s especially jarring compared to how crisp and rich the various ports of these games are on newer consoles. Even going back to the Xbox 360 version of Garou: Mark of the Wolves, the Neo Geo Mini does not do its titles justice. 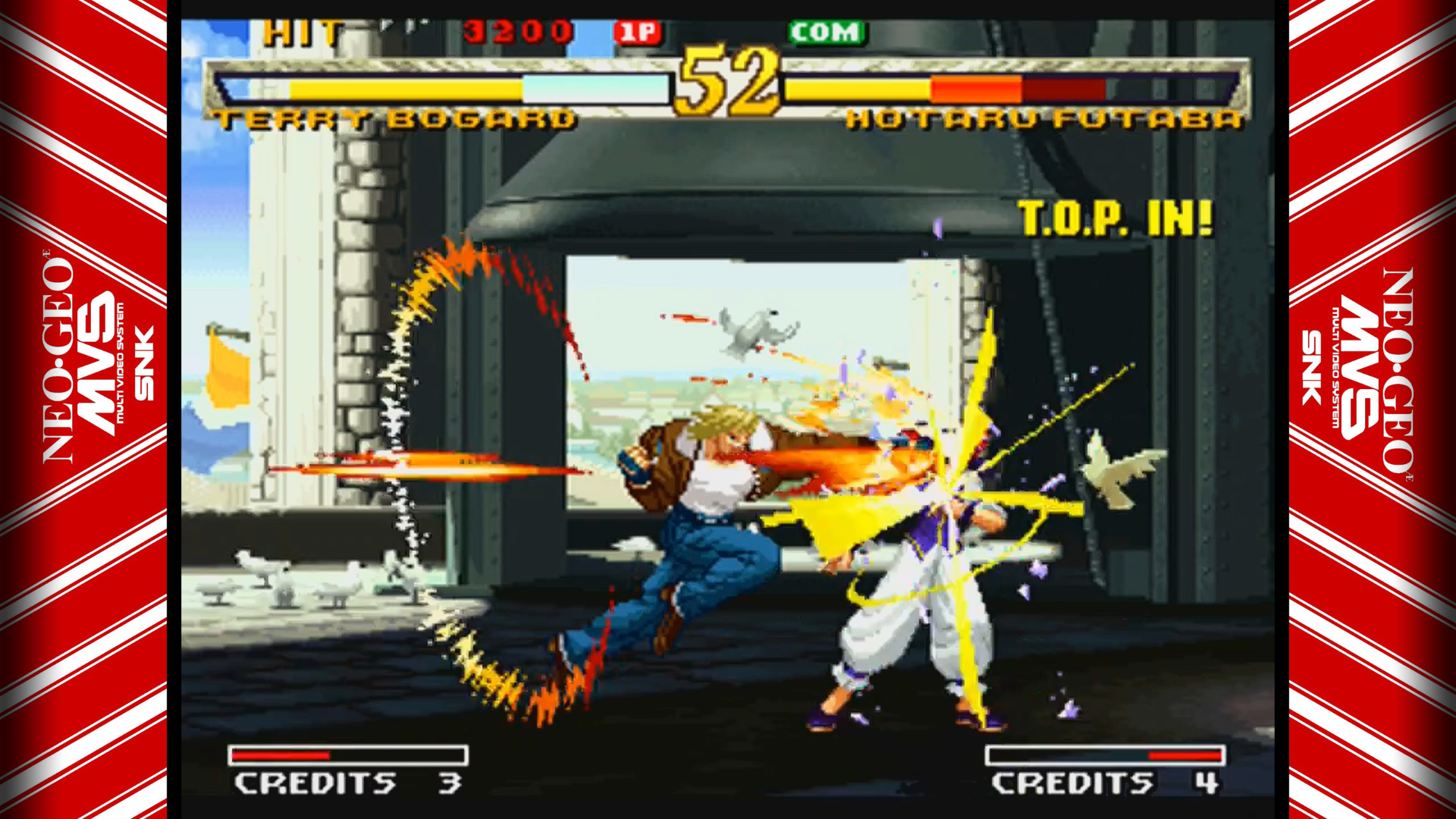 I suppose one can’t complain too much as this new Samurai Shodown device is only $140. Unlike the last go-around, you’re getting two gamepads and a mini-HDMI cable to get you completely up to speed for playing around with your device. You don’t need to worry about tracking down out-of-stock controllers or purchasing a separate cable just to play on your TV.

As would be obvious to most people, this new device focuses more on Samurai Shodown than the previous Neo Geo Mini. Regardless of which color you go with – this model comes in a clear White Haohmaru, clear Red Nakoruru, or clear Blue Ukyo theme – you’ll have access to the entire catalog of Samurai Shodown games released on the Neo Geo hardware. This means the 1993 original all the way up to 2004’s Samurai Shodown V Special. It’s a great complement to the brand new Samurai Shodown sequel, which slots just before II in terms of storyline.

You’ll also find the first three Metal Slug games, a trio of King of Fighters releases (97, 98, and 99), The Last Blade 2, a bunch of Fatal Fury games (including the legendary Mark of the Wolves), and a surprising amount of sports titles. There’s even Ninja Masters, which could pass off as a brand new indie fighter. It’s a great list and arguably of higher quality than last year’s model. It skews more towards enthusiasts of Samurai Shodown and fighting games, but SNK didn’t skimp on providing excellent titles here. 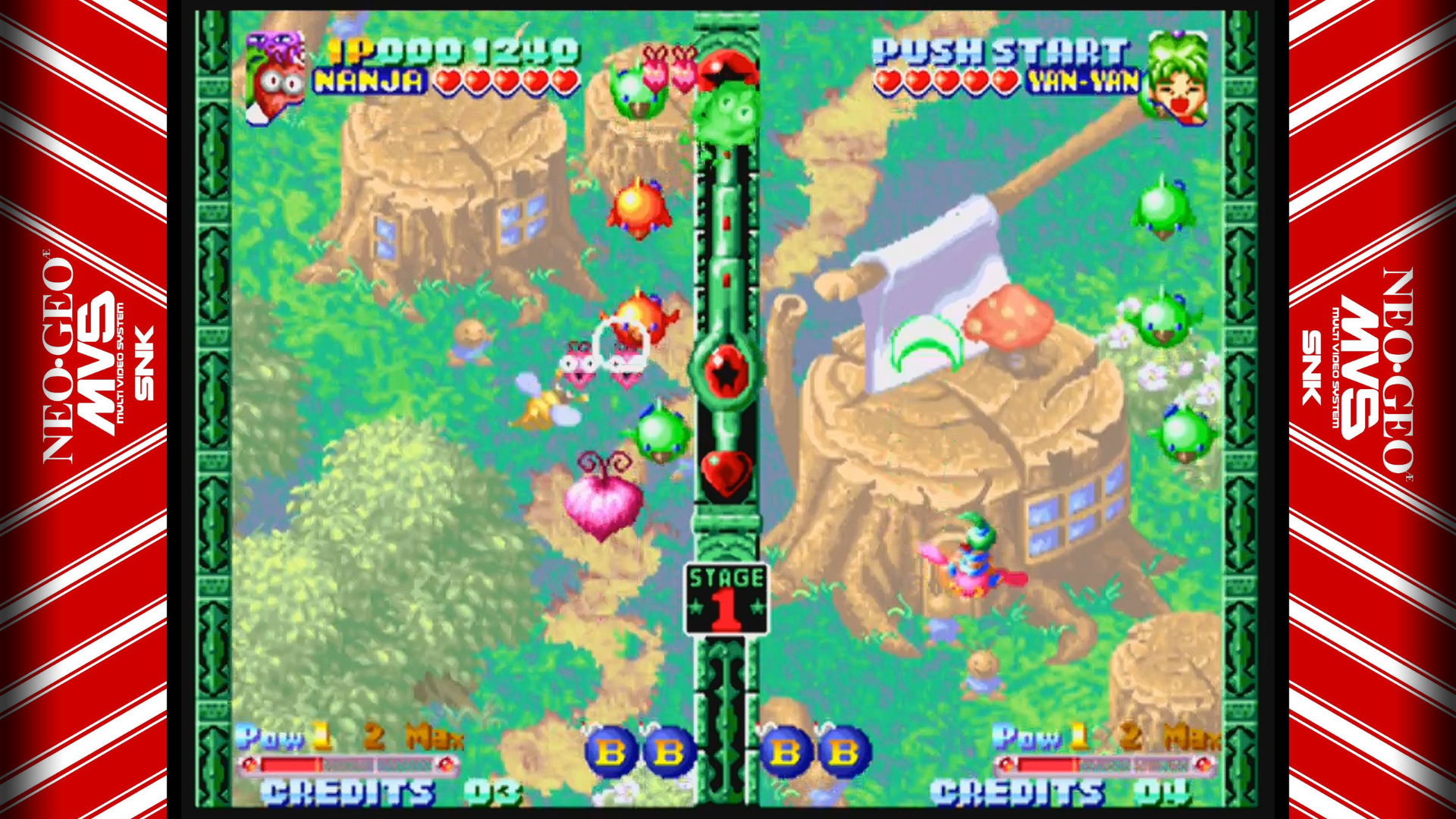 The only downside is that this isn’t an ideal way to play any of these titles. Since the gamepads have mushy directional input, trying to pull off special moves in the various fighters can often be an exercise in frustration. Coupled with the fuzzy and blurry TV output and I wouldn’t want to experience these games directly from the Neo Geo Mini. I feel like grabbing the specific titles you want on your preferred console of choice would be a wiser way to spend money.

That being said, the past year has been kind to the modding scene for the Neo Geo Mini. While I haven’t personally opened mine up, you can hack the device and add some more options in terms of game selection and gamepad support. There are even some mods you can do for the official controllers to make them substantially better in terms of feel. All of that is a little over my comfort level, but it does provide a stronger reason for more tech-savvy individuals to jump on this thing.

You also can’t argue with the sheer value proposition of this device. While the heavy hitters from SNK’s catalog are available on digital platforms, there are a good few games here that have not seen a re-release outside of the Neo Geo Mini. For $140, 40 games is a steal, and with almost all of them being very good, it could be a no-brainer to those who grew up with the original Neo Geo. 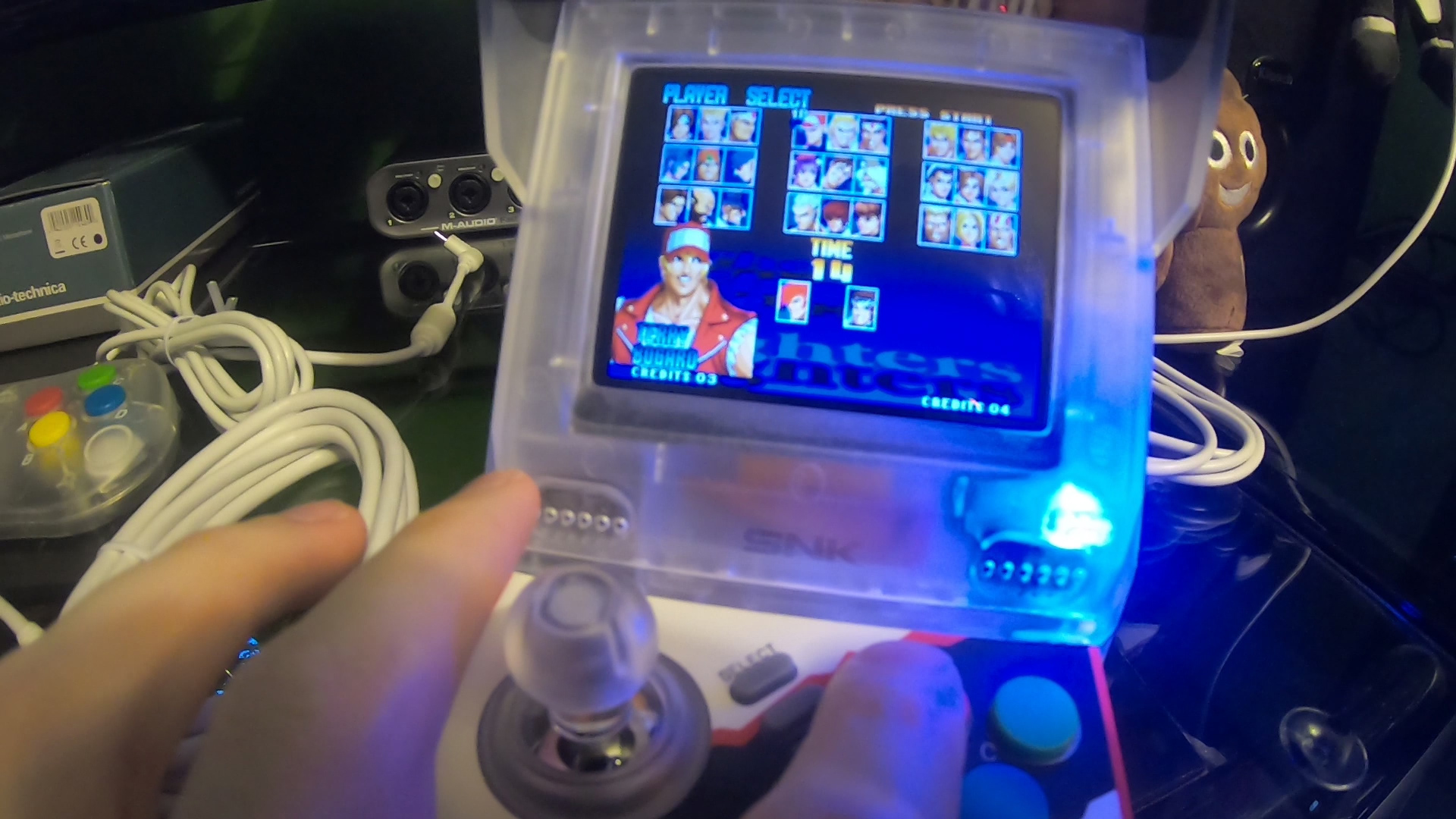 I just wish the more glaring issues from last year’s release were touched up for this repackaged offering. I love the way the device looks, the screen is great, and the game selection is killer, but it’s just plain ugly to look at on a TV. I also want to strangle myself when trying to pull off finishers in King of Fighters, which never quite feels right. There is so much potential here, but it falls short of the mark in key areas.

If you’re still interested, I recommend waiting for a sale on the hardware. The American release will be happening in a few days, so you might be waiting a bit, but grabbing this for $100 should excuse most of its flaws. If nothing else, you’ll have an awesome-looking mini arcade cabinet to put on your shelf. That’s kind of worth it, by itself.

[These impressions are based on a retail build of the hardware provided by the publisher.]