The Dragon Quest saga began for me in earnest only with Dragon Quest VIII. I had played previous games in the series, but not in any capacity other than “OK let’s do this oh WTF this is shit?” I never even got around to finishing DQVIII despite the fact that I loved it like my own magical Japanese/British love child. But the point is that I’m hardly an expert on the entirety of this crazy Dragon Quest thing, and that’s especially true of a little thing called the “puff-puff.”

What the hell is the puff-puff? I’m glad you asked. Just last week, I found myself asking that same question — around the same time I was writing that two–part thing. When all was said and done, the puff-puff just wasn’t relevant to what I was saying in those two pieces. So now it’s time to answer once and for all, “What is the puff-puff?”

It’s a story that begins, as so many others do, with getting high. And it ends with boobs.

One of my favorite things about Dragon Quest IX is the DQVC service, a specialized store offering new items and quests. A couple of Fridays ago, I unlocked a quest called “Puff-Puff Performance.” To any true Dragon Quest fan, this would have immediately meant something quite glorious, but as for me, I simply wandered over to the quest giver expecting a fairly typical mission, perhaps one involving dancing.

However, the quest giver asked me to find an herb called “cheer-me-up.” Hmm … something called a “puff-puff” that involved a magical herb? I thought I had an idea of what was going on now. This silly little JRPG with an E10+ ESRB rating was going to get me high as fuck. Ah, the perks of being an angel. Innocence? Ha!

The reality was quite a bit less innocent than this.

So I set out to find a cheer-me-up. Fairly straightforward. Go out, steal the cheer-me-up from a big-ass troll, and return to quest giver Tuya. That’s when the true fun begins. The music cuts out and the screen goes dark as Tuya makes your character close his or her eyes, and the ritual begins. You see only the text come on screen, telling you of the magic you are about to experience. 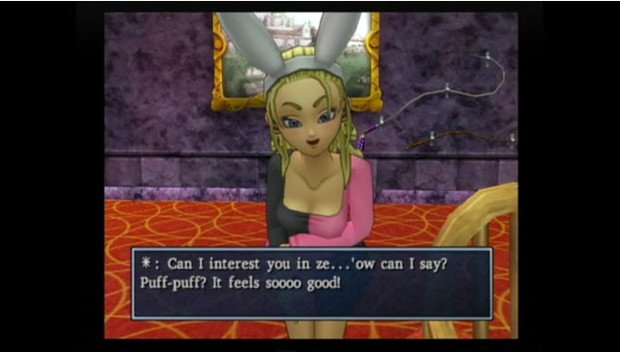 This is where things start to get really weird. Tuya begins talking some really random nonsense, like “Come to me! Good! Now stay!” Uhh, yeah lady, I’m just sitting here with my eyes closed. Then the “puff puff puff puff puff” begins, and a strangely bouncy sound effect plays through the speakers. Is that supposed to represent taking a hit from a pipe?

The sudden “baa” pretty much shatters that idea.

Yeah, with the screen still blank, a voice begins to bleat. It’s not Tuya — she commands the bleating to cease. Is it me? Has my character become so mind-alteringly high that she believes herself to be a sheep? Soon, more puff puff, more bleating, and Tuya offers the cheer-me-up to the baaing voice. OK, so apparently I’m not high. Shit is fucked up.

The bleating reaches its climax, and the screen lights up. Mia, my character, is surrounded on each side by two little lambs who appear to be rubbing their asses upon her face as hearts emit like love fumes from the top of her head.

A couple of stoned lambs are humping me with their butts.

They bestow upon me the honor of the puff-puff once more before fleeing the scene like a couple of freelance hookers at a drug bust, and the “puff-puff experience” ends. I am given a piece of lambswool as a memento by which to remember the experience/ordeal. But, trust me, no memento is necessary. I have nightmares of being suffocated by lamb asses the next night. 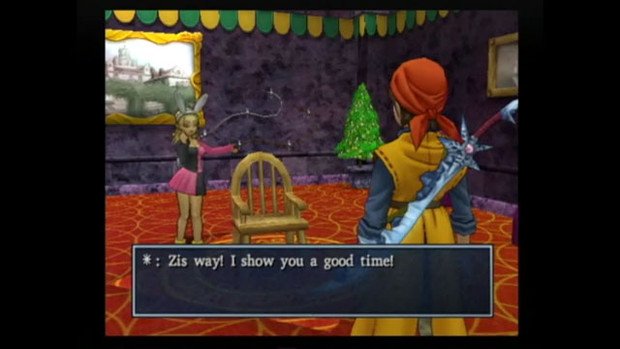 The following day, I do a little research. Apparently, this is not the first puff-puff performance in the Dragon Quest series. Soon, I’m knee-deep in a history of puff-puffs, and I’m surprised to learn that the missing link in my comprehension was breasts.

In the Japanese version of the first game, Dragon Quest (which became Dragon Warrior in the States), a woman offers a “puff-puff” to the hero. Strangely, it’s hard to find a ton of information about this, but Gamasutra has us covered. According to that article, the idea of puff-puff comes from a Japanese onomatopoeia, “pafu-pafu.” The sound it’s supposed to represent? That of rubbing one’s breasts in another person’s face.

Oddly, I kind of think that onomatopoeia works!

Other sources suggest that the person receiving the “pafu-pafu” is supposed to make the sound vocally while his face is the meat in a breast sandwich. Whatever the true meaning is, this could never fly in America, so Dragon Warrior substituted a girl selling tomatoes for the girl offering the puff-puff. It’s amazing that this tale doesn’t end here. But against all odds, this silly replacement for the true “pafu-pafu” spawned a long-running series of jokes.

Throughout the Dragon Quest series (and Akira Toriyama’s other major series, Dragon Ball), there have been a variety of strange references to this bizarre fetish, though its inclusion in Dragon Quest VIII is perhaps the greatest of all. It’s hidden pretty well in the game, but if you do manage to find it, you’re in for a real treat — one that’s considerably more direct in its relation to the real “puff-puff.”

As the video above shows, the protagonist is placed in a chair with the promise that it “feels sooooo good.” He is then instructed to “let it all ‘ang out” (whatever “it” may be) as he is blindfolded. Naturally, he will have twice as much fun with his eyes closed. Sure.

As in DQIX, the screen goes dark and you’re treated to the sound of bouncing and the question “Ave you ever felt a pair as warm and soft as mine?” Oh, yeah, there that is. That’s definitely probably a reference to her breasts.

Of course, no real breasts can be involved in this ritual, so it is revealed that the woman has been rubbing two bouncy slimes on either side of the character’s head. Still, it’s a hell of a lot more obvious in this entry of the series what the puff-puff is meant to symbolize. And it’s just brilliant.

The game does include yet another instance of the puff-puff. Jessica, the party member best known for her gigantic mammary glands, learns the ability to perform a puff-puff in the hopes of “putting a huge grin” on the face of your enemy, making him so enthralled that he misses a turn.

The best part, however, occurs when an enemy attempts a puff-puff upon Jessica. If it fails, the game displays the message “But Jessica laughs triumphantly having won the battles of the bulges.” I really wish there’s something witty I could say here to make the effect greater, but there really isn’t. This level of writing in a game really speaks for itself.

As a bonus, 3D Dot Game Heroes made a reference to the puff-puff. You can see that here. Sort of vanilla, at least when it comes to the full glory of the puff-puff, but at least it’s there.

So there’s your exhaustive investigation into the puff-puff. If my other two posts hadn’t convinced you that Dragon Quest IX is something that you need to have, hopefully this will. Everyone needs a good puff-puff once in a while.