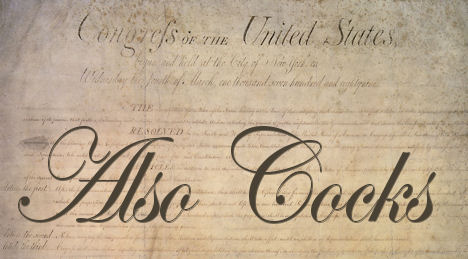 MTV’s Multiplayer Blog has posted The Game Reviewer’s Bill of Rights, along with some very interesting discussion from a number of reviewers across the games media industry. The Bill is only a rough draft, but here’s what they have so far:

Item 1: A final, boxed copy of a game will be provided to a reviewer prior to the writing of a review

Item 2: The review copy of a game will be made available to the reviewer at least a week prior to a game’s release

Item 3: Developers and publishers will not be present while a game is reviewed

Item 4: Reviewers will be given access to a game’s online mode during the review process

Item 5: To be determined — this is a rough draft

MTV went through each item with members of the press and industry, but as the impossibly handsome Chris Furniss pointed out, only the corporate sites like IGN and Gamespot really got to express their opinions. How does the world’s largest independent games blog view this Bill of Rights idea and the demands contained therein? Read on for the opinion of your humble reviews editor, and a few rather candid points from Destructoid’s review desk.

1) A final, boxed copy of a game will be provided to a reviewer prior to the writing of a review

Jeff Gerstmann of Giant Bomb believes the reviewer should have access to a final copy of the game and the instruction manual. As someone who’s happy to just get ANY copy, let alone a final boxed version, I can say that this isn’t too important to an indie reviewer. Boxes are just so you have some shelf space filler post-review, and who even reads instruction manuals in this day and age?

However, I totally agree with the big sites when review code differs from final code. They mention how the Ninja Gaiden II review copy, for instance, had longer load times and a little press sheet telling them the final copy won’t have them — that’s not acceptable. You don’t give a food critic a lobster bisque with some cat shit in it and say “the version our customers get will be free of feline crap.”

Former Gamespot reviewer Alex Navarro calls this a “pie in the sky” request, and if he thinks he has it bad, he ought to try working for us for a month. When it comes to talking to PR about review copies, I have thus far had one of two experiences — either they are really nice and helpful, or they don’t talk at all. Sadly, I deal with a lot of the “won’t talk at all” side of things.

As Destructoid’s profile continues to rise, we are finding review copies a little easier to come by in a timely fashion, but it’s still hard. Ironically, part of the problem comes from these corporate review sites who have embarked on a worrying trend of “review exclusivity.” While I intend to discuss this subject in full at a later date, for now I’ll just say that I find that practice as ridiculous as I do tasteless. In terms of Grand Theft Auto IV, we got our review copy the day of release — you’ll notice that because we wouldn’t rush our review and wanted to feel comfortable about our knowledge of the game, the GTA IV review is still not posted on our site. I may feel ridiculous when I post that review weeks upon weeks late, but at least I know both Nick and I had more playtime and experience with GTA IV than any other reviewer. I find that infinitely more important than something as meaningless as being the first.

I couldn’t even get Rockstar’s UK wing to talk to me and had to buy my own copy, and this is something an indie blogger will have to do a lot of if he wants reviews for every major game. Sadly, there’s every chance we won’t get a game at all, let alone a week before release.

Where we benefit, however, is the fact that we are under no pressure to be among the early birds with our reviews. I concentrate on making our reviews the best, not the first, and in order to do that, I don’t believe in rushing a review out the door as soon as possible. There really isn’t a lot of money in game reviewing — it’s something we do for the love, not the cash, and I find there is nothing more satisfying than taking some time out to craft a well-written, insightful game review. I don’t rush our review staff to get games out early. Nick and I knew his Ninja Gaiden II review would be a day after the other sites, but it doesn’t matter, because the review was great and wasn’t rushed. I have one rule when it comes to reviews — post them when you feel ready. Anything less than that will harm the quality of the review.

Gerstmann thinks the mark of a good reviewer is someone “that can marathon through that stuff but can understand if they let it sink in or simmer over the course of a week or two weeks, how would that experience have differed and they factor that in?” I disagree completely. A good reviewer doesn’t just “guess” how he’ll feel about a game. The best game reviewer is one with the balls to say “I need more time” even if it means he won’t be the first review. I can understand how a reviewer tied to a salary doesn’t have that freedom, but at the same time, it doesn’t make them better reviewers — merely constrained ones.

3) Developers should not be present while a game is reviewed

I think both myself and the corporate sites are all in agreement on this one — it’s generally a bad idea. I can say this as I recently attending the GRiD review day where we essentially had an afternoon to review the game. This seems to be a more common practice than I’d anticipated, but I was astounded that I had a matter of hours.

These review days might be good for the publisher, but it’s terrible for the reviewer and, in my opinion, any writer willing to base a review off that contained, controlled and ultimately insufficient environment is doing a disservice to readers. I spent this weekend thinking about what to do with GRiD — too late (and embargoed) for a preview, not enough time for a review — and despite the temptation of trying to make a full review, improvised and made a very silly, but ultimately honest article. I reviewed the game based on an hours’ play and just talked utter bollocks for the whole thing.

Actually turned out quite successfully, so maybe I should attend more of these review days.

God yes! As online modes become more and more important on consoles, the fact that companies aren’t allowing for this is rather silly. What’s funny is the fact that even if you review the game after the street date, in a case of a game like Dark Sector, you might never get to test the online mode because nobody’s playing it (probably. I’m not playing it) so you simply have to leave the discussion off the review, maybe with a token “multiplayer — it has it” mention.

I think they should hire monkeys to sit in the game’s online mode twenty four hours a day until the street date, so we with review code can give the online a go.

5) To be determined — this is a rough draft

As a large indie site, we’re in a very interesting position. We’re a little too big to be easily ignorable enthusiasts, but we’re also not as powerful as the corporate sites. Good PR people recognize we are a good investment, while bad PR people think we can be ignored. As I said, the money in games media does not come from reviews — it’s something we do because we want to, and by that token, we really don’t need the good graces of game publishers. However, as a big site with a lot of loyal readers, they’d be morons to think using us wouldn’t be to their benefit.

That said, not even a site like IGN, able to levy exclusivity deals with publishers, is able to score the perfect review scenario all of the time. It’s something that will have to change one day as videogames become a widely accepted and legitimate form of entertainment in mainstream eyes, but for now we are still in a bizarre limbo where a lot of things wrong with games media and the relationship between industry and press are in place.

As an indie reviewer, I must say that our situation is at times frustrating and even insulting, but I wouldn’t change it for the world. Navarro states that “People are too panicky, too pressed for time. That’s just the way it is.”

That’s not the way it is for us. We don’t always get what we want, and we work twice as hard to be taken seriously by anyone in the games industry, but at least we’re not pressured. I’ll happily take frustrating dead-end emails, being shunted from PR guy to PR guy, and having to swallow my pride and buying (!) the occasional review copy, if I can also keep my feeling of creative freedom and the knowledge that our reviews might not be the first, but they’re the most honest and least forced reviews on the market.

That’s just the way it is.