A new Nintender has entered the ring

While sitting around killing time with Kingsway (best thing ever go buy it) and staving off what I can only assume to be a deadly parasite after drinking so much delicious ocean water while on vacation, the doorbell rang. I answered in my typical attire; a faded “best dad ever” t-shirt, evidenced by the fact that it was 1PM and my kids were still in their pajamas, and saw a tired postal worker standing there awaiting my signature plus a hefty duty fee on a package I had almost forgotten was coming.

The Retro AVS is a great, cheaper alternative to the Analogue NT. Not long ago I posted about a controller that was on the way for it by Retro USB much to the lukewarm response of most people. I’ll admit; it’s ugly. Our own CJ Andriessen said it looked like a container for novelty video game mints, the kind you’d find at a Hot Topic or GameStop. But it touted some impressive battery life (100 hours!) mechanical switch buttons, and zero input lag, so I thought I’d give it a whirl since I own an AVS myself and am sick of my kids tripping on cables all day.

Full disclaimer: I am someone who is extremely picky with my input devices. A bad controller can simply ruin gaming for me. I was the kid who wouldn’t play with you if you had a Mad Catz controller. So whenever I fire up a review video of The Retro Geek Game Master or whoever, and they are clearly oblivious to how important it is to have a controller that doesn’t make you want to murder everyone on your block out of pure frustration (still sorry about the mess), it really gets under my skin.

Typically, the NES has a bad track record of getting some pretty shit aftermarket controllers these days. I have yet to find one that scratches every itch; the original is simply the best. Out of every retro-styled controller or aftermarket I have seen, 8bitdo seems to do the best job in creating something that doesn’t feel like an utter piece of shit to use, and even then at a friend’s house I noticed considerable, infuriating input lag when I was trying out his Raspberry Pi. Maybe it was a configuration issue, but I know for a fact that Bluetooth creates some level of lag, and in old twitchy platformers it can often be inexcusable. I may not be much of a speed runner, but I have my games I know inside and out so well that I can burn through them on a single life, and this is simply not possible with a shitty controller. 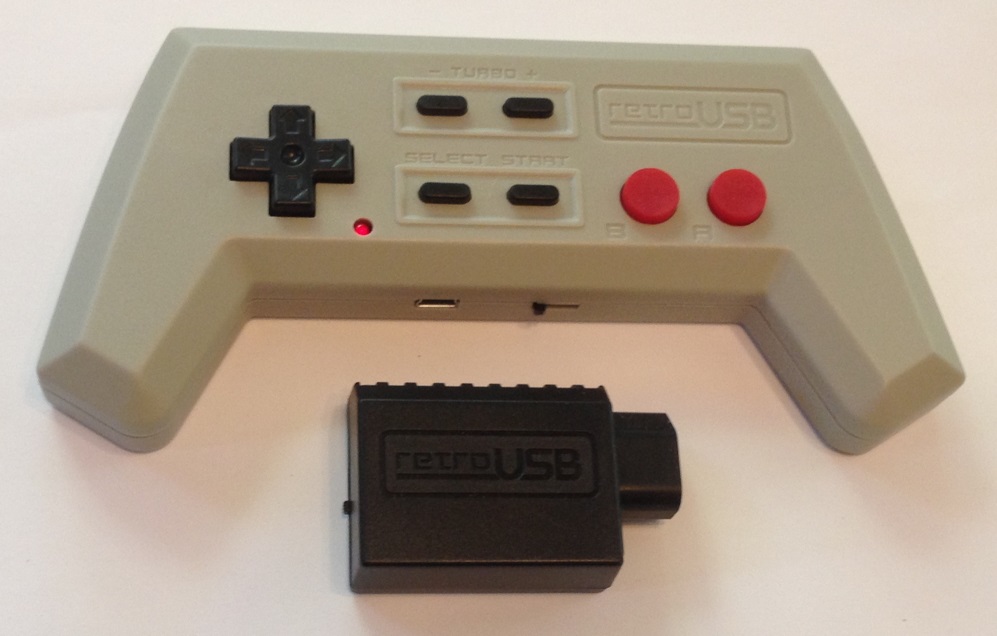 The Retro USB Wireless Gamepad solution is not perfect in terms of build quality, to be sure. It feels cheap; I’d compare the quality of its components to be similar to other aftermarkets out there, such as the stuff by Retro-Bit or Hyperkin. It is extremely light, almost to a fault, but hey, it’s an NES controller; they have never had the weight or ergonomics of a modern controller, so that isn’t much to stress over, but there is a feeling of cheapness that permeates the device. Retro USB is not too concerned with things like aesthetics generally, but given the heft and quality of the AVS, I was expecting to be similarly impressed by the way the controller felt, and was a bit let down. The packaging it comes in feels similarly bootleg in design, but this is no different than the bright red box and simple inserts that the AVS came packaged in, and ultimately isn’t too relevant.

Getting past the initial impression, and the fact that there is no relevant documentation included (at least not in my package) I immediately had problems playing Tetris right out of the gate. The A button was simply not functioning properly, missing inputs, and otherwise feeling laggy and slow to respond. After a bit of experimentation I realized that the turbo function was enabled on the A button leading it respond this way, and once I disabled it, my issues were immediately corrected. 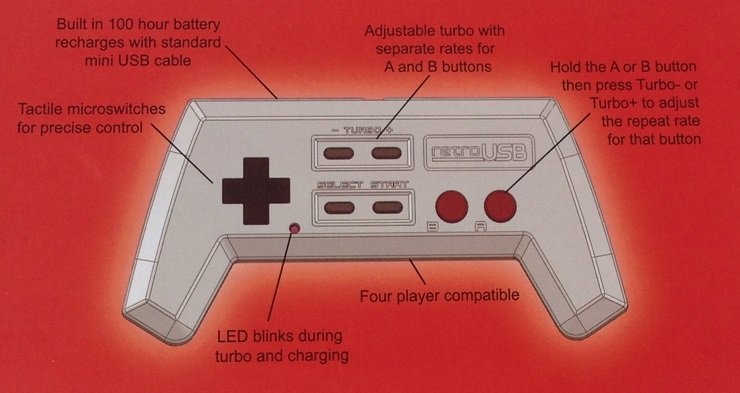 No input lag is right. This controller is extremely responsive. I played various games with it to test and make sure that the precise inputs I needed to get past key sections of levels could be performed without any issue. The microswitches being used for the buttons give a tactile response to input, but are a little too clicky and distracting for my taste; I would have preferred a softer response. I didn’t realize the D-Pad would also have microswitches, which I don’t generally love, but I find it feels pretty good despite this. My biggest gripe with the D-Pad is that it feels just a little too loose, giving a distinct rattle when the controller is moved about. While it didn’t result in sloppy game play, I did feel a certain uncertainty that I was going to be able to make that T-Spin or jump, even if the results betrayed my fears in the end. I haven’t and won’t test the battery life; I have confidence considering the simplicity of this device that it’s probably close enough to the mark not to matter, and some hardcore testers have already verified this.

I wanted to write a longer article comparing different controllers, but really the original NES controller is still the champion here. Yes, the D-Pad gets mushy after time. I have had to disassemble and clean too many to count. I love this controller as a wireless alternative. It does one job and does it adequately enough, I just wish it felt a little more solid. It is not cheap by any means. But the difference between this and some of the Bluetooth alternatives, while it may only be noticeable to diehards, is enough to make me recommend it over the majority of them. If wireless doesn’t concern you though, there is almost no reason at all to consider this device. Stick with the NES controller you know and love. But if you are like me and trying to simplify your cable situation, and especially if you have an AVS or an Analogue NT hooked up to a big-screen TV in the living room, or you have an NES but don’t want to use extension cables to get across a room with it, this is a decent wireless solution aimed at pleasing the crowd to whom frames matter, and who can’t deal with any input lag.