In my last post, I told you about how my time playing Dragon Quest IX quickly restored my faith in JRPGs. Never again did I think I would lose myself so completely in a Japanese role-playing game, yet over 100 hours later, here I am, and I’m not planning to stop any time soon. Hell, I never thought I’d play any game for 100 hours again.

But while my own faith was being restored, I was caught up in a world where angels roam the earth yet no one is aware of their presence, and few are believers. My role as an angel complicated this: my pink-haired, female Celestrian (the game’s own special brand of angel) traveled the world alone, doing good deeds in silence and often not receiving the credit.

However, like all things in a JRPG, this situation was soon turned on its head. Suddenly, I found myself less concerned with humanity’s faith in me and more concerned with my own faith in humanity. Sh*t’s about to get hardcore analytical in here, so if you’re allergic to spoilers, now’s the time to bookmark this and flip on your DS.

Soon after your first escapades as a Celestrian doing good deeds in the shadows, a mysterious event in the heavens sends you crashing down to the earth, no longer donning that floating halo above your head. You’re not quite a mortal but no longer an angel. The biggest change? Now people can see you. And since there’s a massive statue with your name on it in town, you’d expect that people would start praying at your feet.

That doesn’t happen. Instead, people wear their lack of faith on their sleeves, refusing to even entertain the thought of your character and their town’s guardian being the very same. Mistrust pervades your encounters, and some even accuse you of being an impostor with ill intentions. For your first ever contact with humanity, it’s underwhelming to say the least. Only one person seems to trust you at all — a girl named Erinn who will be invaluable throughout your time in the game. She runs the inn in Angel Falls (haha get it?), and her father was the world’s greatest “Inntertainer” before his passing.

At this point, you’re exposed to the narrative device that drives all of the storytelling in Dragon Quest IX: ghosts who have failed to depart the world due to unfinished business. Edwinn, Erinn’s father, remains to watch over his daughter, who runs that quaint little inn in Angel Falls and is unaware that her father gave up his illustrious title to care for his unhealthy daughter. Erinn refuses to believe it, and it’s up to the player to prove it to her. 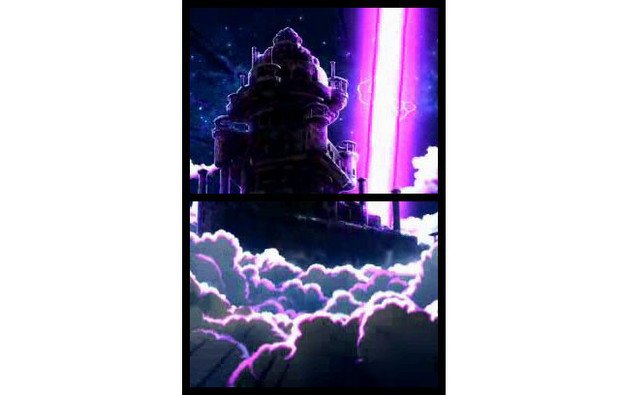 Soon, Erinn realizes the truth about her father and agrees to pick up where he left off, traveling to the largest inn in the world to be a great Inntertainer. This is the player’s first taste of helping someone and being recognized for the deed, and it sets up the rest of the game quite nicely. All of the characters involved have their own rich personalities and clear motivations, which makes helping them as rewarding as it is fun. Unlike many RPGs where helping people amounts to “Here’s the wood you asked for,” each main story quest is a fully developed short story, tying in beautifully to the overarching plot.

Strangely, that overarching plot isn’t revealed until much later, though the game’s main themes become apparent before long. In each town that you travel to, you come across someone who is knee-deep in one of humanity’s serious flaws. Whether it’s greed, mortality itself, opulence, or asocial personality, the people you interact with are all deeply flawed people. It’s actually rather rare to find such flawed characters in a JRPG, a genre which seems to pit a world of good against an evil force that wants to destroy it.

What the player soon finds out, however, is that all of these flaws are what make these characters great, especially as your actions provide them with the tools they need to overcome their struggles. For instance, one of the greatest stories told by the game involves a very strange girl named Marion, who is the maiden of a mansion in one of the world’s larger towns. As soon as you enter the town, you hear tales of the incredible generosity of Marion, who will give just about anything away in return for friendship. Since you need a ship, it seems like sweet deal.

However, as soon as you meet her, it’s clear that something is not quite right. She flips out on you claiming that you aren’t her friend and refuses to see anyone else for the rest of the day, instead retiring to her room. After finding Marion’s ghost and her gravestone, it’s very clear that something is amiss. The living Marion is actually Marionette, Marion’s doll, who Marion brought to life before she herself passed on. A life-long illness had prevented her from experiencing friendship in the real world, and the doll was the closest to a real friend that she ever had. All she wanted was a few moments to experience her best friend as a real girl.

While unconventional, a pretty basic story of human friendship and the need for companionship is told here, and we can all at least understand the situation presented — a person is physically prevented from experiencing real companionship and instead opts to create it in a manner not unlike what we all read about in the beloved Calvin and Hobbes comic series. We can all imagine ourselves in such a situation even if it has likely never happened to us. 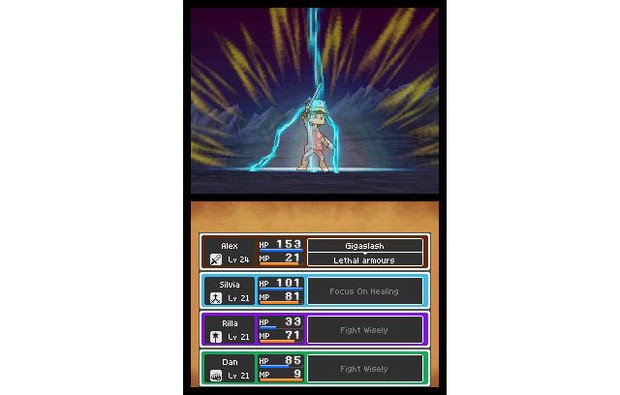 Again, we get to see a little bit of the beauty of humanity in what is an ultimately ugly situation, and that’s the common thread that ties all of the story quests in DQIX together. These short little stories are truly heartwarming, and as you continue to move toward the game’s eventual conclusion (still unaware of who the “enemy” is) you see more and more glimpses into humanity and people’s power to rise above their flaws.

Then, once the game’s main antagonist appears and the threat against the world is made clear, it all suddenly makes sense. Corvus, a fellow Celestrian, has vowed to destroy humanity after losing his faith in the world’s inhabitants, claiming that they are a flawed creation undeserving of existence. Over time, you come to learn that his rage can be traced back to one simple day. He had been protecting his town from an evil army when defeat approached, so he went to rest in a cave. Soon, the army found him just as his love, Serena, gave him a potion that made him fall asleep. Thinking he was betrayed by the human he loved most, his hatred was born and his purpose made clear: destroy the humans that betrayed him.

Therefore, the question posed to the player becomes, “Is humanity worth saving?”

It is at this moment that the player realizes that each of the story’s quests had been designed to instill in the player a love of the world’s inhabitants. Though the player character is an outsider in this world (just as the player himself must get to know a brand new world), the heartfelt quests and rich characters give the player a reason to oppose this evil force.

In essence, the game gives the player faith in humanity before it presents you with a force that has no faith whatsoever. Though your early encounters with humanity were less than fulfilling, the deeper you get past the faithless, abrasive people you first meet, the more you see that humanity is indeed worth saving. While most RPGs expect you to care about saving the world and its inhabitants without providing a compelling reason, Dragon Quest IX spends the vast majority of its narrative nurturing a seed that it plants in the player very early. You’re not fighting on behalf of a princess, a king, or even a planet. You’re fighting for each of the incredible people you met, and the humanity that they represent. 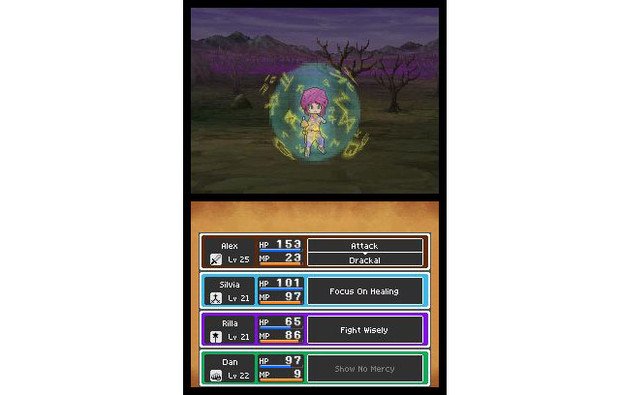 Eventually, after defeating Corvus, even his faith in humanity is restored as he learns that Serena’s betrayal was simply a misunderstanding, and she was only trying to protect him. Once again, the real story here is that between Corvus and Serena, not between an evil force and your party of adventurers. It’s a brilliant way to set up the story, as it allows you to experience a completely rich set of characters without being a voiced character yourself, and it is through those characters that you, as a player, develop your own view on the events of the story.

I’m confident in saying that Dragon Quest IX has one of the richest stories I’ve ever experienced in a role-playing game, and it’s all due to the way that the game employs the theme of faith. There’s really no religious message to be found here. This is a story all about faith in people and our belief that the people around us are inherently good, even if our first encounters with them are very unpleasant, and even if they are corrupted by the many forces at work in the world.

How many of us can honestly say that we haven’t lost some measure of faith in humanity? From idiotic YouTube comments to an unbelievably bad response to a devastating oil spill, we have a lot of reason to forget that underneath what is readily apparent upon first glance, humanity is good.

Humanity and the JRPG are worth loving and worth saving.