Discussions of faith always seem to make people uncomfortable, as most participants in such discussions are involuntarily thrust into the situation. “Hey, can I talk to you for a minute about Jesus?” Not all of them are religious, like the always awkward “Why don’t you have any faith in me?” Why do you think we see so few games willing to touch such a topic unless it’s some JRPG with a world full of inhabitants who worship the “world tree?”

Amidst all of this, there’s Dragon Quest IX, a game in which themes of faith — religious and otherwise — pervade each hour spent playing. In fact, this strange DS role-playing game even takes the theme of faith beyond what the developers intended. For me, the game had a quite profound and unexpected effect.

Dragon Quest IX restored my faith in traditional, Japanese-developed RPGs, and the game’s focus on themes of the restoration of faith had a lot to do with that. For the first entry in this two-part series, let’s take a spoiler-free look at why Dragon Quest IX has the power to make you love JRPGs again.

For those readers who have not played Dragon Quest IX and refuse rather vehemently to consider it due to its status as a JRPG, this initial part of the discussion may seem written as a letter to you. In a way, it is. I understand your position. I slogged through hour after hour of White Knight Chronicles after agreeing to review it, and watching a recent live stream of the game nearly made me slam my pinky toe in a car door.

In fact, does this match up to your own reasons for giving up on JRPGs? “If the combat system hasn’t already bored you into a coma, the mission design surely will.” “None of the incredibly boring characters makes the journey more bearable.” “It forgets the one thing that I love so much about JRPGs: charm.”

These are all lines taken from my review of White Knight Chronicles, and they perfectly sum up why I’ve been disappointed in the vast majority of JRPGs in the last ten years. I ended up hating Final Fantasy XIII long before its conclusion for the exact reasons above. Time and again, I’ve entered into a JRPG experience only to give up after it failed to capture my attention.

In the current environment of game design, which sees Japanese developers seeming to lose faith in themselves and suggesting that they need to be more like Western developers, it’s easy to see why this is happening. These games are trying to be something that they aren’t. It’s as if Japanese developers want to appeal to an image of the Western gamer that is more twisted and deformed than the figures in a Dali painting. 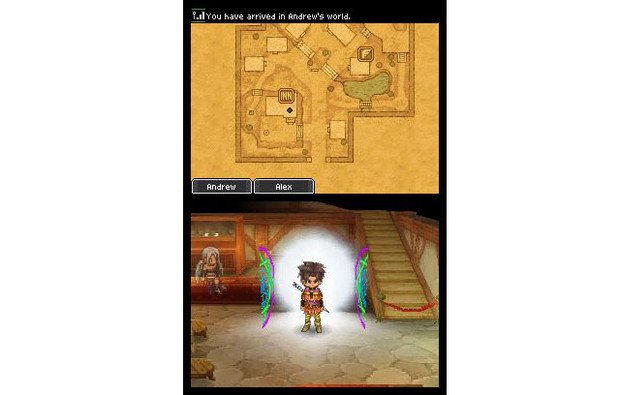 Because of this, that quality of charm that I mentioned before has nearly disappeared from RPGs, Japanese or Western. Hell, did anyone smile while they played Final Fantasy XIII? Aside from the beautiful introductory cutscene and the incredible music, I found little to smile about. Frocobo (the chocobo who lives in Sazh’s afro) was cute, I guess.

Still, no one can call FFXIII a charming game. Its story has little to no personality. While its characters aren’t the worst of the recent JRPG releases, they’re not much fun to spend time with, and their struggles and problems don’t feel particularly human.

Then there’s the gameplay, which I initially thought to be a nice way to streamline a game in a genre where the gameplay feels unnecessarily overcomplicated. After about fifteen hours, those thoughts were gone. Streamlining, in this case, meant taking away everything that I enjoy about RPGs: interesting progression, exploration, and the furtherance of an epic quest.

Again, none of these problems is specific to any one game. Instead, they represent what appears to be a future design theory that is slowly killing what used to be my favorite genre. In trying to evolve and meet the demands of a changing industry, developers are leaving us with products that aren’t nearly as enjoyable as the games they made fifteen years ago.

Then there’s the Dragon Quest series, which has somehow continued to get better as the years go by. Dragon Quest VIII was one of the most traditional RPGs released during the PS2’s life, yet it was also one of the best. Somehow, without changing the formula much at all, it managed to provide a much more enjoyable journey than those games that tried to stir the pot.

Dragon Quest IX is a similar story. Its turn-based combat doesn’t have any flashy additions to the typical formula: choose your action from the menu and wait as the fighting unfolds. On paper, its story sounds pretty basic: someone wants to destroy the world, and you have to stop it. Aside from the addition of multiplayer, the game sounds like it does nothing new at all. And, really, it doesn’t.

Instead, it just does everything well, which seems to be the major element missing in all of these evolutionary JRPGs that can’t seem to get anything right. There’s no value in doing something new if it isn’t any good. New does not automatically equate to good, and old does not automatically equate to bad. It’s the adherence to this philosophy that allowed Dragon Quest IX to restore my faith in the genre. 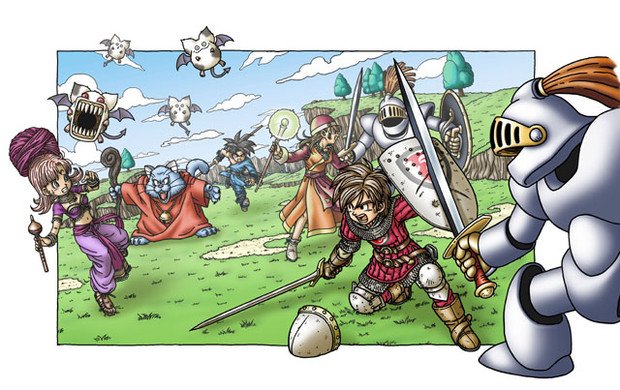 There are a lot of specific things that the game does to achieve this, and perhaps the most important simple thing is that elusive element: charm. Our own Jim Sterling said in his review of the game that it “exudes charm from every pore and reintroduces the concept of giddy excitement in games with each new step taken.” Indeed, this is one hell of a charming game, just as the series always has been. It isn’t afraid to keep those elements that make it this way, including the ridiculously named monsters like the “Meowgician” and the “Raving lunatick.” Games nowadays are terrified of being silly. Dragon Quest IX is not.

The charm enters into the fantastic writing as well, with even the most innocuous of characters adding to the world in some pretty hilarious ways. For instance, all over the world players find churches at which to “confess” and save their progress. Most priests are typical priestly sorts, who save your progress in a very proper manner and bless you before you’re sent on your merry way.

However, one of these priests in a random town just happens to be a total bro. Approach his altar and hear his holy words such as “Yo! Man, I am choked up! My eyes are filled with water. The words of the Almighty have spread far across the plains. Word! Perhaps you will open your ears to His words too. For sure they will help you in the sweet times and the wack.” Word, indeed.

It’s stupid, but it’s the most charming kind of stupid. You can’t help but smile as you come across this dude and hear his most righteous rap, and he’s just some copy-paste priest character model hanging out in a cave! Things like this make for a rich world that is far more fun to inhabit for the often extended running time on an RPG.

And while the game eventually tells the story of a group of adventurers saving the world, its initial adventures are far more rich and original. You play as a Celestrian—essentially a guardian angel—who can travel to the world below and perform good deeds for people, though they cannot see or interact with you at all. It’s actually a very startling beginning; RPGs always put us right in the spotlight, but the first time you help someone in DQIX, half of the people don’t even believe it.

As you travel and continue to help the world’s populace, you’ll come across some pretty amazing situations involving incredibly rich and original characters, and their stories are actually far more human and emotional than you’ll find in the typical overwrought RPG story. You won’t find every other character crying for stupid reasons in this game. The emotion is left up to the situations themselves and the player’s understanding of them. 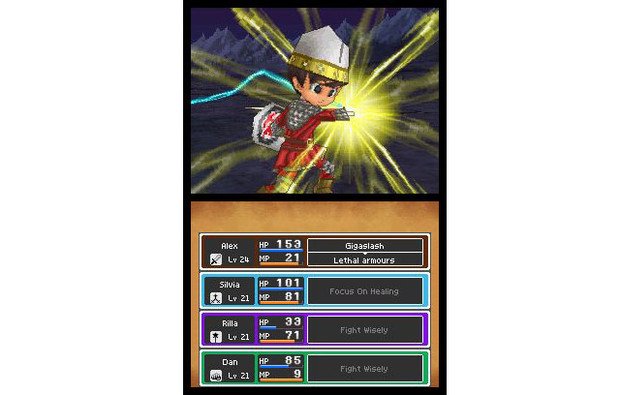 The game is initially set up as a series of short stories that the player participates in—you’re not actually aware of the overarching “save the world” plot until late into the game. For instance, there’s a quest near the middle of the game to assist a town that has been ravaged by a terrible sickness. A man’s daughter has fallen ill, and the man has locked himself away in order to find the cure. I won’t spoil it here, but it doesn’t exactly turn out like most RPG quests do. Other quests involve finding a man who has recreated an entire town in stone and a woman whose unique powers allow her to control a monster fish, compelling it to provide the townspeople with food.

The point here is that you’ll actually get invested in each town and each set of characters you come across. Even in this very traditional RPG, quests are set up so that you don’t feel like you’re doing the same useless tasks over and over again that have some loose, unstated connection to “helping.” Your voiceless character and your three voiceless companions enter into these stories and leave as quickly as you came, but the effects are lasting not only for the town and its inhabitants but also for you as a player.

What Dragon Quest IX really proves to me is that a game can achieve a sense of JRPG whimsy and tell rich stories at the same time without resorting to a bunch of melodramatic blubbering. That sentence there really sums up why Dragon Quest IX gives me hope that there are still people out there who love making good JRPGs the right way, capturing everything that we loved about the genre in the first place. It truly restored my faith.

It’s strangely coincidental that DQIX achieved this, since it is a game in which the theme of restoring faith is so prevalent from start to finish. I’m going to take a good look into the story of DQIX and how this theme is used in the second part of this series, so stay tuned. In the meantime, go play Dragon Quest IX or, as bro priest would say, “go forth and have your faith restored in a totally radical way, homie.”