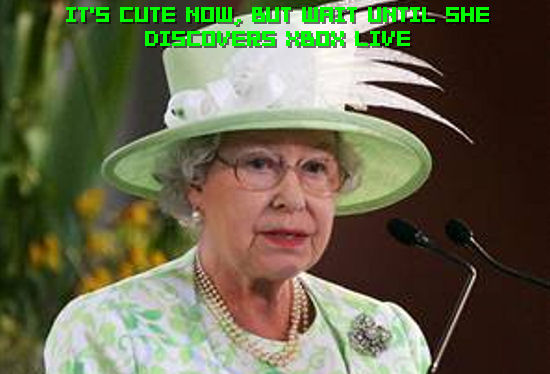 Apparently I’m expected to do this one, being English and all, but apparently the Queen of Great Britain is a big fan of the Nintendo Wii, getting hooked on the white funbox when she saw Prince William playing a game. Just writing about the Royal Family makes me feel like a bloody tabloid paper. Turn to page 23 for candid pics of Billy Piper’s new beach boyfriend and to see us painting the idiot parents of Madeline Mccann as poor innocent victims of the EVIL Portugese police!

“When she saw William playing a game after lunch at Sandringham she thought the Nintendo looked tremendous fun and begged to join in,” a source is said to have reported, probably in a posh voice. “She played a simple ten-pin bowling game and by all accounts was a natural. It was hilarious. William was in fits of laughter. He was enormously impressed at having such a cool gran.” A cool gran? I thought everybody’s gran had played on the thing by now.

Wii fan or not, this does little to make me back down from my theory that we need to burn down Buckingham Palace and banish those privileged inbreds back to Germany where they came from.