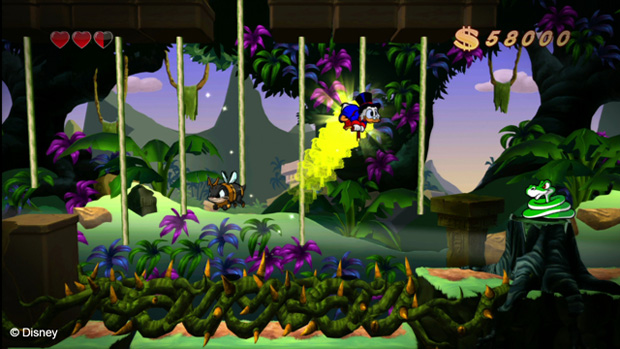 Sing along! You know the words!

DuckTales was always one of those games that I never thought in a million years would get a re-release, much less a remake with hand-drawn art and fully voiced dialog performed by the original cartoon’s voice actors. Somehow, both Capcom and Disney decided to revive the classic NES platformer over 20 years later and hand development duties over to WayForward, the modern-day Capcom equivalent when it comes to solid licensed software.

I played DuckTales Remastered three separate times at E3 this year, and never once did the smile leave my face. The art, the music, the cutscenes, the challenge, everything was exactly what I was hoping for in a remake. I don’t think I’m jumping the gun by saying, based just on the two levels from the demo, that Remastered has the potential to be one of my favorite platformers ever.

DuckTales is as much about the music as anything else, so I’m glad the demo stations had headphones. The first few notes of the theme song on the title screen are pulled directly from the NES’ chiptune soundtrack. As it continues, it begins to change into into composer Jake Kaufman’s arrangement. Jake has become the go-to guy for applying retro sensibilities to contemporary game tunes, and his work here demonstrates precisely why he’s the best man for the job.

His arrangements for the Amazon, Transylvania, and boss showdown themes maintained the classic melodies while adding a few embellishments. The Amazon music gives off the perfect jungle vibe, while the Transylvania music takes cues from Michiru Yamane’s Castlevania soundtracks by tossing in a little electric guitar. And when you hear that boss music, you know that shit just got real! I can only imagine how many minds will be blown when we finally hear Jake’s Moon mix.

The highlight of this remake is of course the DuckTales voice actors who reprise their roles: Alan Young as Scrooge McDuck, Russi Taylor as the nephews and Webby, June Foray as Magica De Spell, and Terry McGovern as Launchpad McQuack. Some actors, such as those for Gyro Gearloose and Fenton “Gizmoduck” Crackshell, have passed away, thus their shoes were filled by others from Disney’s stable. And making a surprise cameo as the Amazonian tribe leader is Jason Marsden, known for playing Goofy’s son Max since A Goofy Movie.

The intro and mid-stage cutscene dialogs are full of the same lighthearted humor as the cartoon, and I wager there is enough spoken material just in this demo to fill an entire episode of the show. Some players might be annoyed by the lengths of some of these segments, but it’s absolutely criminal not to listen to them at least once in full. For the demo, you could only skip the cinematics by pausing the game and selecting the “skip” option.

Remastered director Austin Ivansmith explains that the team has debated on whether to map a “skip” function to one of the buttons without requiring to enter the menu. Maybe it’ll be added in the final build, but right now, they reeeeaally want you to hear the fowl banter.

I haven’t even talked about the actual gameplay yet! For the demo, there were easy, medium, and hard difficulty tiers. On the low end, enemies take off half a heart, you can find many health-extending heart containers, and you have a map of the level on the pause menu — and on the GamePad if you are playing on Wii U. On the high end, one hit equals a full heart lost, heart containers are nearly nonexistent, and you’ll have to navigate the levels sans map.

You may think, why a map? As you may recall, the levels in the original were often quite labyrinthine, especially Transylvania with its warp mirrors. While the level layouts are mostly identical to their 8-bit counterparts, some segments have been extended or tweaked while new ones have been added. For example, you now have to collect a set of medallions in the Amazon in order to light the way to the temple, and the temple itself is a bit longer than I before.

There’s a part in the Amazon on NES where you have to pay a statue a bunch of gems in order to proceed. That same statue in Remastered doesn’t say a thing, thus your path is not impeded. However, as a nod to its former gatekeeping duties, you can smash it open like a piñata, revealed a whole hoard of red gems equal in value to what you had to pay out on the NES.

Scrooge controls just as well as he always did, but now you have the option of performing his pogo jump by pressing a button or, for the classic experience, by pressing a button and holding down on the D-pad. Each action is brought to life through amazing hand-drawn art and fluid animations. When Scrooge sets up a golf swing, he readies the head of his cane and waggles his cute little tail. When he gets swallowed by a carnivorous plant, he frantically beats the red bastard with his cane until he’s spat back out.

The enemies too take on an incredible new dimension. Most notable are the mummies in Transylvania, which now telegraph which way they’ll turn by cocking their head to one side if doubling back or adjusting their shoulders if continuing straight ahead.

And the bosses, oh my God! On the NES, bosses had bog simple patterns and croaked after a handful of pogo jumps. This time around, you have to work for your victory. The Incan stone head in the Amazon shifts the walls and ceiling in a bid to smash Scrooge into duck paste. Meanwhile, Magica De Spell in Transylvania makes columns of fire appear, hides inside magic mirrors that you must shatter, and sets the entire bottom half of the room ablaze, trapping you unless you quickly hop to safety atop floating bricks that suddenly materialize.

I had so much fun playing DuckTales Remastered, and I’m so happy that we won’t have to wait much longer for the full game. It’s scheduled to arrive this summer for Wii U eShop, PSN, XBLA, and PC. Before then, I plan on marathoning the cartoon and re-watching the DuckTales movie, Treasure of the Lost Lamp, because you can never have enough ducks.