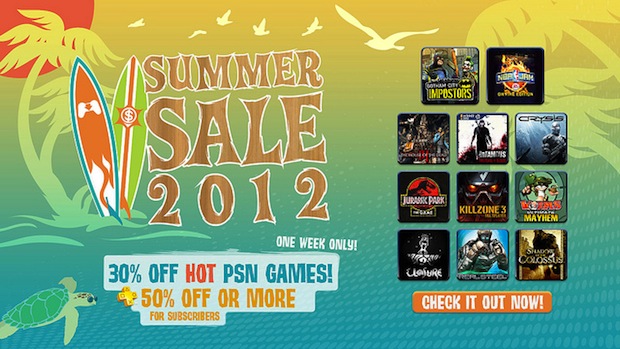 Details on a brand new summer sale for the Playstation Network have leaked compliments of IGN. The sale will start Tuesday, July 3rd, and will involve 12 games, ranging from both bite-size PSN titles all the way up to full digital PS3 games. If you are a PS+ member, you’ll get 50% of every title — if you’re an unclean member of the proletariat, you’ll get 30%.

While the sale on the whole is unimpressive (see the whole list below), I can heartily recommend inFamous: Festival of Blood, Pac-Man Championship Edition DX, and Shadow of the Colossus HD (this isn’t the ICO double pack, if you were planning on getting that).

Gotham City Impostors
$10.49, or $7.34 for PlayStation Plus Members.
A 6 vs. 6 first person shooter, Gotham City Impostors is a multiplayer game unlike any other, giving players the opportunity to pose as their amateur vigilantes or villains. Create your own Bats and Jokerz characters using unprecedented customization options.

NBA Jam: On Fire Edition
$10.49, or $7.34 for PlayStation Plus Members.
HE’S ON FIRE! NBA JAM: On Fire Edition from EA Sports is guaranteed to light up the court as you throwdown the craziest dunks in the history of the basketball. Don’t miss out on this reimagining of the classic arcade game!

Shadow of the Colossus
$13.99. or $9.79 for PlayStation Plus Members.
Experience a majestic journey through ancient lands, on a quest to bring a girl back to life. The only way to save her is to slay sixteen Colossi. Explore expansive landscapes and seek out each gigantic beast in its own natural habitat.

inFAMOUS Festival of Blood
$6.99, or $4.89 for PlayStation Plus Members.
Vampires swarm New Marais, and revered superhero Cole MacGrath has been bitten. To save his soul and city, he has just one night to find and kill the head vampire. Be sure to check out this stand-alone addition to the inFAMOUS universe.

Crysis
$13.99, or $9.79 for PlayStation Plus Members.
Earth, 2019. A team of US scientists makes a frightening discovery on an island in the South China Sea. A massive alien ship reveals itself and now the US and North Korea must join forces to battle the alien menace.

Killzone 3 Multiplayer
$10.49, or $7.34 for PlayStation Plus Members.
The complete Killzone 3 online experience – enjoy fierce 24-player battles using the latest ISA and Helghast weapons and technology. Utilize the PS3 controller or PS Move to take out your foes during firefights.

Closure
$10.49, or $7.34 for PlayStation Plus Members.
In the dark and mysterious world of Closure, only what you see exists. Manipulate lights to phase objects in and out of reality in this multiple-award-winning puzzle game. Don’t miss out on this unique indie title.

Jurassic Park The Game – Full Season
$13.99, or $9.79 for PlayStation Plus Members.
A cinematic adventure 65 million years in the making! Experience a brand new adventure from Telltale Games, and see new areas and dinosaurs in this landmark game set during the events of the first Jurassic Park movie.

Worms Ultimate Mayhem
$10.49, or $7.34 for PlayStation Plus Members.
Worms Ultimate Mayhem is the definitive 3D Worms game! Load your weapons and experience a new dimension in destructive turn-based cartoon action! If you’ve never played Worms, this game will surely hook you.

The House of the Dead III
$4.89, or $3.42 for PlayStation Plus Members.
Run fast. Shoot faster. Straight from the arcades, this fast-paced shooting game is more realistic than ever with enhanced graphics and PlayStation Move motion controller compatibility. Get your Sharpshooter ready!

Real Steel
$6.99, or 4.89 for PlayStation Plus Members.
A boxing-style fighting game featuring robots as combatants, based on the hit film Real Steel.