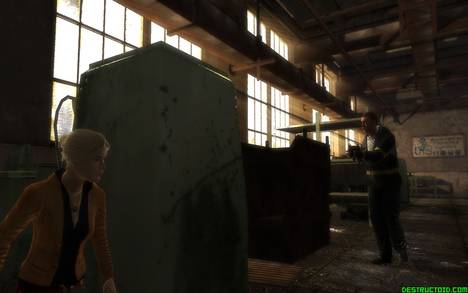 I want to let Gingerbread Studios — a new Polish developer — off the hook for their first project, but I’m finding it a tad bit difficult. The just-announced first/third-person shooter The Protector for the PC and Xbox 360 looks and sounds so painfully generic that it’s impossible to ignore.

The story has something to do with South American mythology and, of course, “the escalating threat of global terrorism within the modern day world.” Which is fine, because I’ve played enough “global terrorism” games that I just assume every game will, in some way, involve it. But then the game throws in two playable characters — a British mercenary, Jonathan Kane, and the “beautiful and wily” U.S. archaeologist, Jennifer Guile. Get it? She’s smart and crafty, so her last name is “Guile”? Clever.

Gingerbread Studios are promising a high-intensity mix of action and stealth framed by an intriguing plot, which will feature an overwhelming two endings based on decisions you make throughout the game. If you haven’t fallen asleep yet, check out these equally bland first screens of The Protector.

The Protector centres on the exploits of two vastly different characters – hardened British mercenary Jonathan Kane and beautiful US archaeologist Jennifer Guile. After an acrimonious two-year estrangement, these two former lovers are reunited when Jennifer’s father – a leading archaeologist – is murdered by a new terrorist organisation called Scarlet Vengeance, which is looking for a powerful Aztec artefact to use for a devastating terrorist attack. When Scarlet Vengeance’s attentions turn to Jennifer – the only person who knows the location of the artefact – Kane is forced to track her down and protect her. Thrown together in extreme circumstances, the duo must overcome their differences and use their unique skills to thwart the terrorists’ horrifying plan.

‘Gingerbread Studios has taken the theme of South American mythology and masterfully injected it into a contemporary setting that reflects the escalating threat of global terrorism within the modern day world,’ said James Cato, CEO of Gingerbread Studios. ‘The Protector’s two distinct playable characters and eclectic mix of action and stealth make it highly unique, while its branching, thrilling plot promises to keep gamers captivated till the end credits roll.’

* Play as both Jonathan Kane – a hardened British mercenary and former MI6 agent trained in counter-terrorist tactics – and Jennifer Guile – a beautiful and wily US archaeologist.
* Two distinct gameplay modes – searing, tactical shooting action (Kane) and tense, stealth sections (Jennifer).
* Use your environment to hide and take cover. Enter into third-person mode when in cover to acquire a better overview of your surroundings. Lean out from behind cover to engage your enemies with minimal exposure. Blind fire around corners when severely pinned down.
* Superb world physics where objects are splintered, shattered and sent flying by barrages of bullets and explosions, creating massively believable battlefields. The player can even shoot enemies – and be shot – through thin walls, adding a further tactical element.
* Enemies intelligently seek out and utilise cover – just like you.
* Disarm enemies by shooting the weapons from their hands, leaving the enemies vulnerable. Once an enemy has been disarmed, they must either reach for a sidearm or run for cover – both of which take time.
* Enemy AI uses lifelike line of sight and hearing to determine your whereabouts. Enemies are more vulnerable in darker areas, while their lifelike reactions to sight and sound also provide the perfect environment for stealth-based gameplay.
* Fully interactive world, populated by civilians, commuters, students and workers who intelligently react to their surroundings and situations.
* Wide range of enemy types, ranging from elite terrorist forces to mythical Aztec creatures.
* Intriguing plot featuring two very different endings, depending on your choices.
* Challenging puzzles and mini games.