I can’t look at the night sky and not think of Pyre. Stars are a fundamental part of the game’s narrative. Not only do they guide your way, they act as a sign of hope. The cosmos lights many paths forward, and in Pyre, looking up affords your allies a chance at freedom from exile. One escapes purgatory through due process: Claim victory in the ceremonial Rites, return home. That’s the only way out. Not all Rites offer liberation, but participation is required to qualify. Therein lies the role of a Reader — they translate the celestial beacons into a language all their own. Directing your caravan, however, comes with a flood of ethical caveats.

Pyre’s journey begins by throwing you, the Reader, into exile. A group of three fellow vagabonds find you dying in the Downside, an oppressive limbo that’s home to those cast out by the Commonwealth. The three masked wanderers save your life, find out you’ve been exiled for your literacy — a rare trait in the game’s fiction, and the ride begins. Alongside Hedwyn, a lovable and pleasantly hopeful young man (despite being in exile for years), and his overprotective guardian Jodariel, you’re introduced to Rukey. He’s a mangy cur with a pristine mustache, yet somehow still pales in comparison to some of the more intriguing characters you’ll meet.

From here, every character you encounter — including the mysterious Voice in the sky that strings you along throughout the game — refers to the Reader as ”you.”

And “you” have a lot to learn. 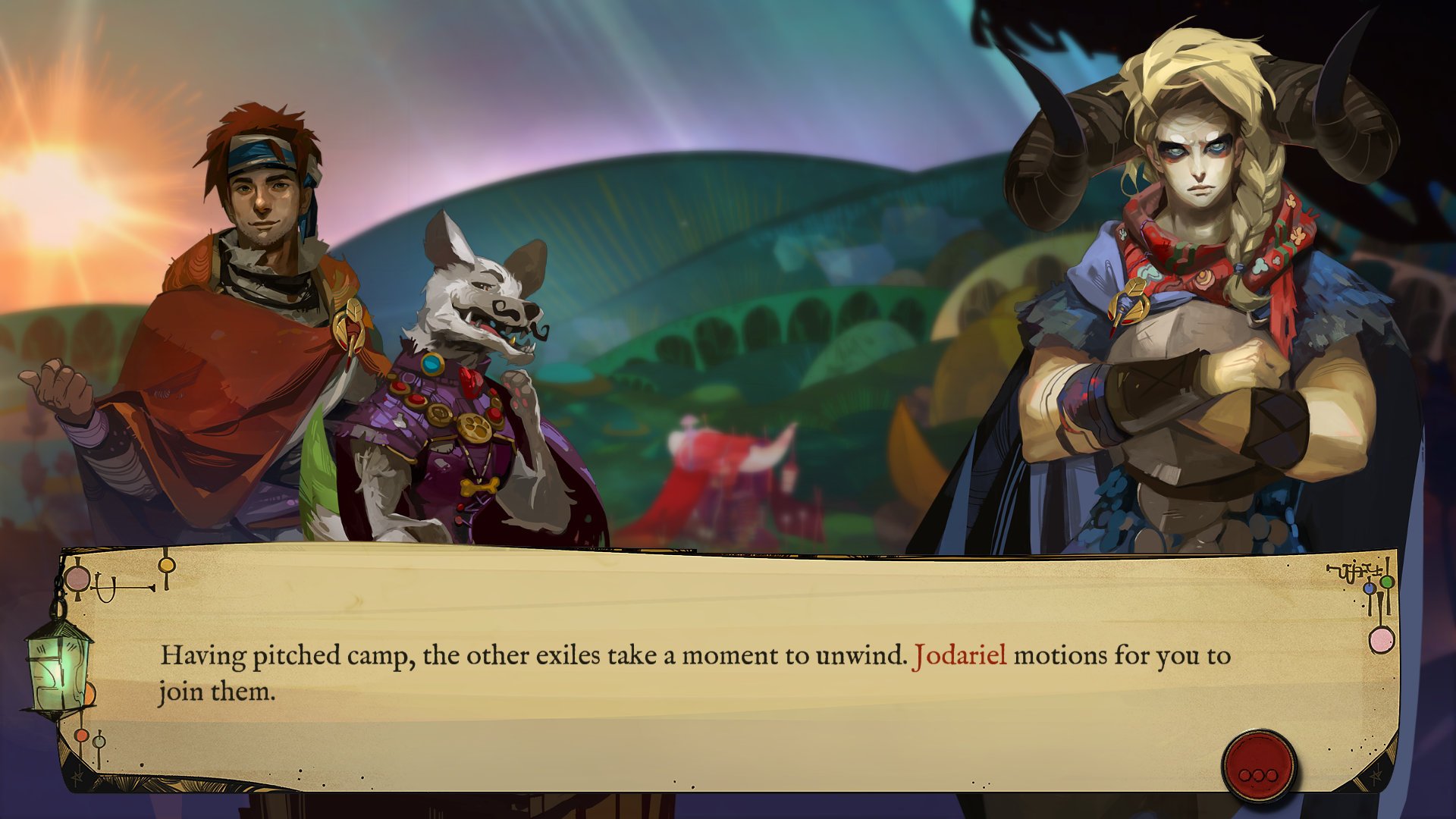 Pyre makes sure your input is valued right from the beginning. Almost immediately after meeting Rukey, he asks you about his mustache and responds accordingly. Hate it? Say no more, it’s gone. Love it? You now have a mustachioed canine as a friend.

You’re the shot caller. You’re the shepherd. You’re the Reader guiding these exiles through the pursuit of their freedom, and you’re the player on the couch watching it all unfold, reading along every step of the way. Most decisions you make aren’t directed by stats, items, or any other quantifiable upgrade, they’re regulated by your relationships. The consequences of your actions and how they affect those around you becomes a labyrinthine tango of decision making, confrontation, and damage control. Pyre doesn’t judge you solely by your conduct. There are no “right” or “wrong” choices. It evaluates your performance as a Reader by holding you accountable for your actions on and off the field. You will rile people, and it’s by facing these ramifications that Pyre forges opportunity for narrative growth — around 200,000,000 combinations worth.

Rukey was among the first to go in my story. He and Hedwyn had grown an especially strong bond by their time in the Downside together, but his family in the Commonwealth needed him more than we ever did. Hedwyn knew this, too, but still he struggled to cope after Rukey’s final match. The lively, optimistic free spirit was quietly crushed. Once someone ascends from the Downside, you won’t see them ever again.

After we spent post-game cooling down, we set off for the next bout of Rites. Upon nearing our destination, I hovered over the available areas to see what the group was interested in doing. While others wanted to go fishing or pay their respects to the gods, Hedwyn wanted to go to Licksand — cur country. It was just a simple piece of flavor text, but the addition made me feel for Hedwyn as if I had lost Rukey myself. And I had.

My decision was made. I didn’t even check to see what the reward was; I was too focused on the consequence of Rukey’s absence by my hand.

Jodariel wasn’t around to comfort him — she was liberated just before Rukey. I didn’t know her that well, but I know 16 years in exile is a long time for anyone. I also know she’d have been there for Hedwyn. I had promised the trio deliverance; though, maybe Rukey or Jodariel would have better handled the loneliness. 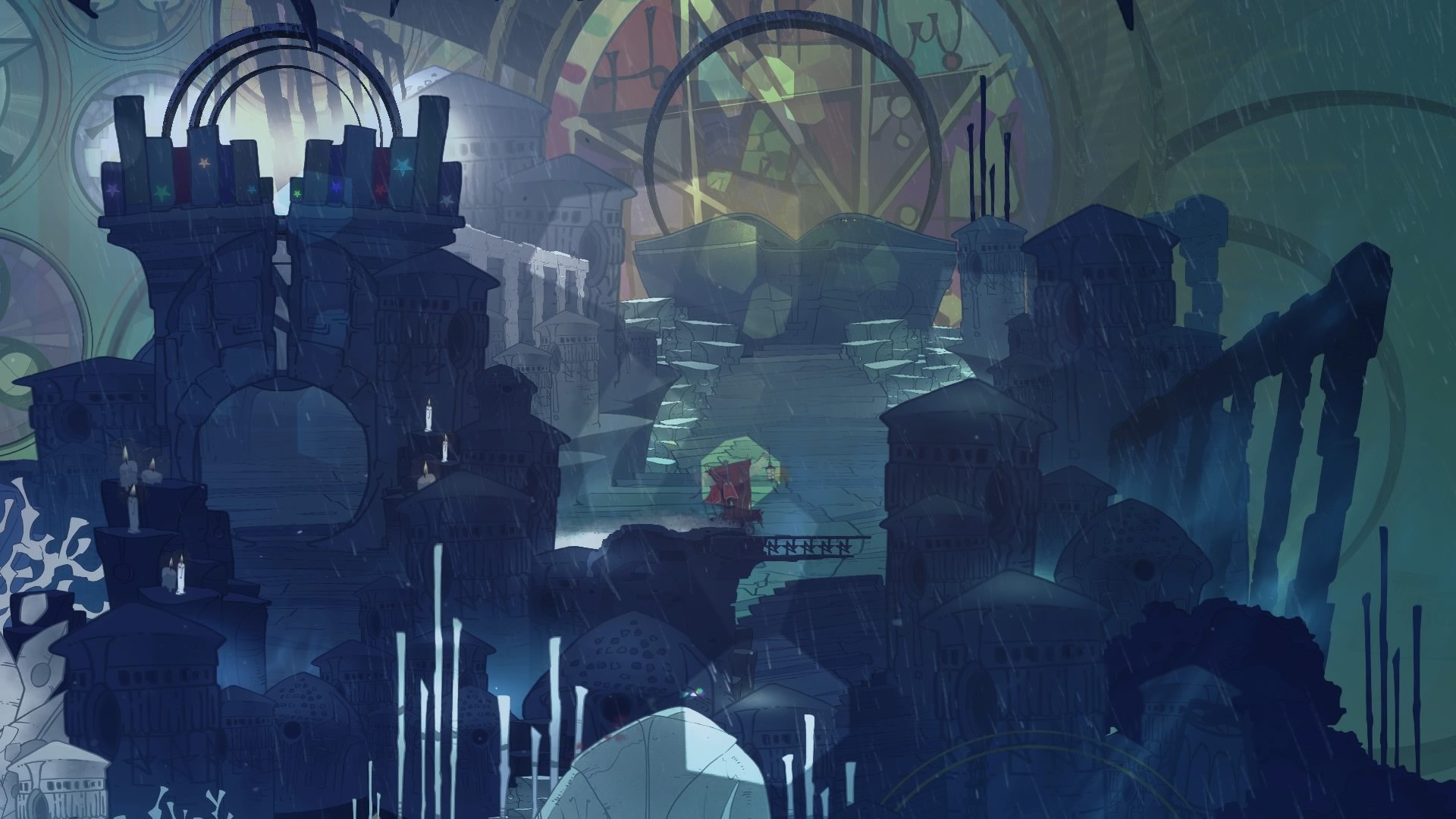 Your playbook looks a lot different after losing your MVP. Wandering from Rite to Rite offers moments of clarity as you reflect on recent events, but spending time with characters on and off the field weaves dependency with social familiarity. As your performance with an ally improves, there’s an equally-increasing urge to free them. Some are more of an open book than others, but every Rite provides enlightenment to those who participate. Mastery over one’s internalized personal struggles augments their abilities during the Rites to be much more intimidating, and those in opposition are no exception. Using one companion too often, however, can inflict them with banishment sickness, preventing their participation in the next Rite. The narrative implications derived from your actions directly affects gameplay, and your creed is constantly questioned.

Do they deserve to be free? Are you continuing an exile’s sentence simply because you like them? Knowing that you might perform better with one teammate could increase the chances of granting someone else their freedom, but at what point is instruction considered servitude?

Maybe you’re too afraid to lose, and that’s okay. Losing can provide its own sense of stained solace. At least you get to keep your friends around. Maybe you’ll feel a glint of happiness for a character you admire on an opposing team, or, perhaps, the outcome will birth a new vendetta. Either way, it’s hard to shake the feeling that you let someone down. Forfeiting your athletic aptitude for the sake of a character’s story arc is a big ask and affects everyone around them — including you. Indecision has no place here; not out in the Downside, and certainly not on the path towards ascension. You must choose. You must fight. Win or lose, your attempt is necessary to progress.

After losing three games in a row, choosing what to say to my triumvirate became a delicate process, involving layers of word puzzles to craft a customized dialogue. How they responded to what I said was outside of my control, but, as a Reader, words are my jurisdiction. One by one, the team walked by and offered me their perspective. Pyre’s second-person storytelling shines brightest in these moments. While my speech stoked the team’s fire for the next Rite, I made myself feel better for losing. For better or worse, my actions directly affected these characters without controlling them at all. 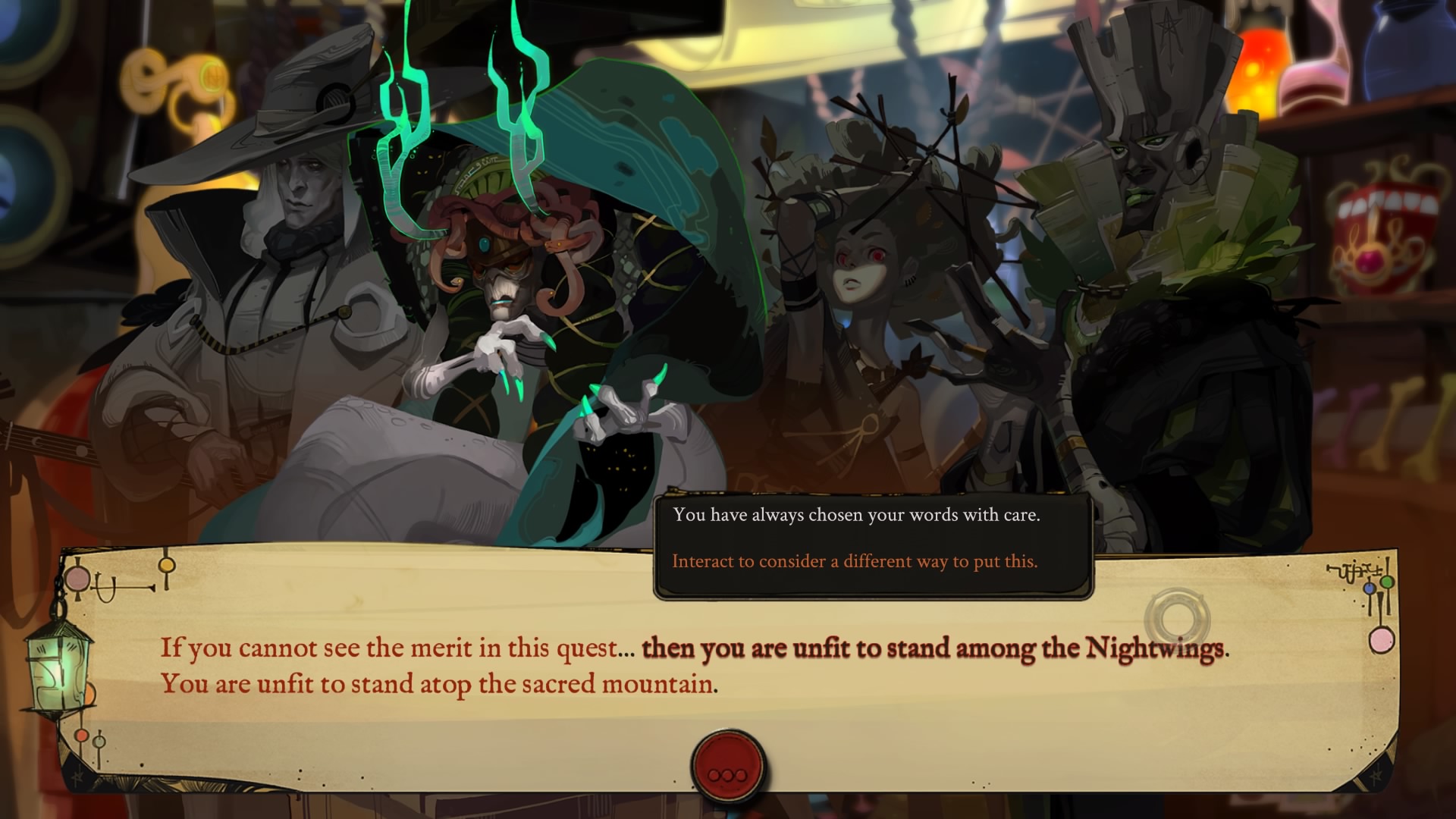 Supergiant Games’ previous entries allow you to customize their difficulty by applying different conditions to the game, making enemies and environments harder to overcome with every activated limitation. In Pyre, they’re called Titan Stars, and they bear much more weight than past portrayals. The bigger the hurdle, the more capable you feel for jumping it — in this way, controlling the game’s difficulty turns confidence into a commodity. A bold approach is not without tangible reward; every illuminated Titan Star offers more enlightenment to those who persevere. But a bigger challenge doesn’t necessarily mean you feel triumphant for conquering it. Victory, sometimes, isn’t even in the ascension of your own teammates. It’s realizing how important “you” are to each character — especially your “enemies.”

Manley Tinderstauf is a putrid character. At first glance, I was enamored with him. Anything even remotely druidic captures my entire attention, and Manley’s a goddamn sentient tree. Having met the poor sap, though, I despised him. His shameless self-indulgence is abhorrent. He seeks fame and status, and he’s willing to step on the heads of anyone to get himself there, and him alone. After our first match together, I refused to play against them just to deny him the chance for freedom. I had damned an entire triumvirate for the actions of one, but my disgust was blinding. I checked the leaderboards after my third loss and saw Manley’s team in third place. My spirits were low, but our morale was bolstered from my speech.

“You don’t deserve third place,” I thought as I looked to the stars to seek him out. It was my first victory in four games, and a fucking revelatory one. I had won.

Pyre exposes you to the disheartened and downtrodden through loss, and with each victor comes a loser. Every character has their reasons for being exiled, and even more reasons why they’ve been stuck there for so long. The freedom of one condemns the fate of another, so no success ever feels wholly relieving. Whether it was picking one to ascend from a group of friends or denying Manley his autonomy, I was among the reasons for someone’s continued captivity. I had become liberator to some, sure, but I was pure damnation to most. Ethical dilemmas are abundant in Pyre, but a self-imposed morality will only get you so far. It’s not enough to know good, you must do good. Falling short on a promise is literally (and I do mean literally) a different story. You need to perform. 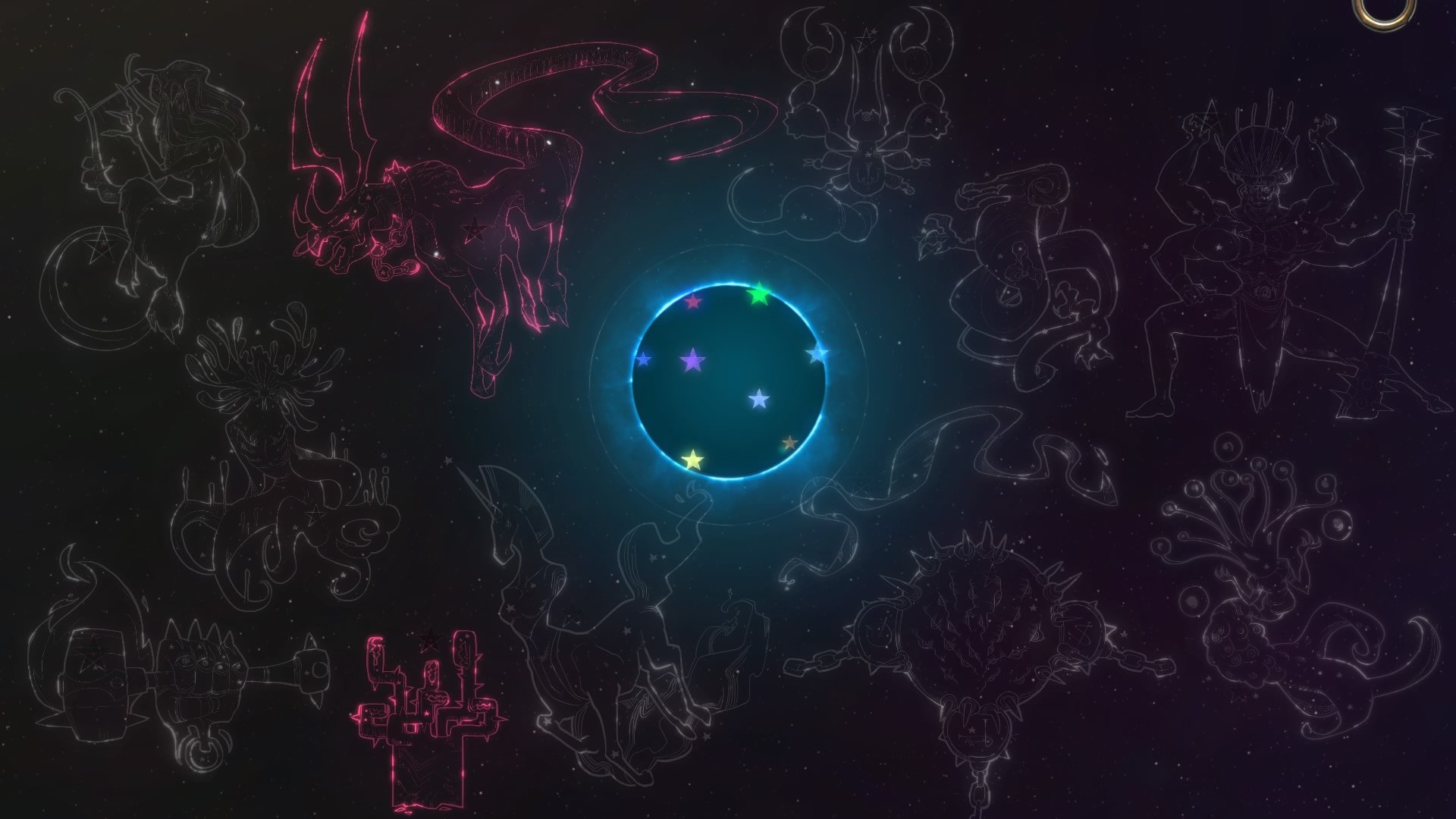 You don’t participate in the Rites in the same way as the others, and the Reader conveniently missing a character portrait helps prevent any disassociation from your duty. Your companions look to you, sitting in front of the screen, to translate the language of the divine. You decide how to present those intentions. Or, maybe, you won’t say anything to them at all. You are the Reader, and nothing tells you otherwise. This connection between player and Reader quickly strengthens, and eventually, you start to see the world of Pyre through a single lens.

A palpable tension develops when fighting for the freedom of a companion during the Rites. It’s arguably more intense when confronting a demoralized friend after a string of losses. If you earn a teammate’s freedom, they’ll send you a letter (after some time) to let you know how they’re doing up in the Commonwealth. I can only imagine the opposing Reader receiving the same postcard with every failure of my own.

The constellation of possible outcomes in Pyre is astounding. You read the stars; you write the story.