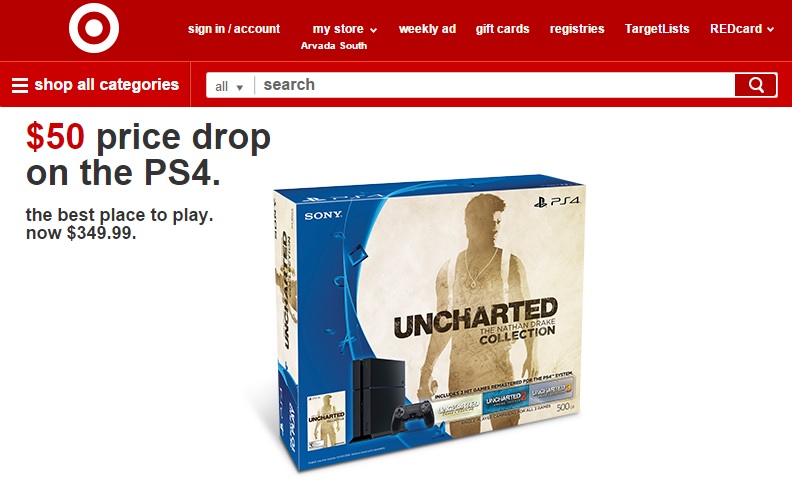 Target seems to think so, anyway

Target seems to be suggesting a PlayStation 4 price cut is nigh. The retailer’s website indicates the system “now” costs $349.99, as opposed to the standard $399.99 manufacturer-suggested price tag, which has remained constant since Sony released the system in November 2013.

Sony hasn’t officially announced a price cut for the West, but one just went into effect in Japan days ago, where the company’s Asian wing lowered its valuation from ¥39,980 to ¥34,980 on October 1.

After Sony announced the move at Tokyo Game Show, many around the industry, including Xbox boss Phil Spencer, speculated North America and Europe would soon be following Japan’s lead.

It’s worth pointing out Target is offering PS4 bundles with a $50 gift card. However, these are for some of the older packages, the ones touting Destiny and The Last of Us: Remastered, rather than models featuring titles coming out this fall — such as The Nathan Drake Collection bundle, which Target simultaneously advertises at $349.99 (as pictured above), and $399.99 on its product page.

It’s possible this is all just a screw-up on Target’s part, but given the PS4 has been on the market for a couple years now, it seems like only a matter of time before Sony finally budges on price.

Destructoid reached out to Sony for comment, but has not received a response at this time.