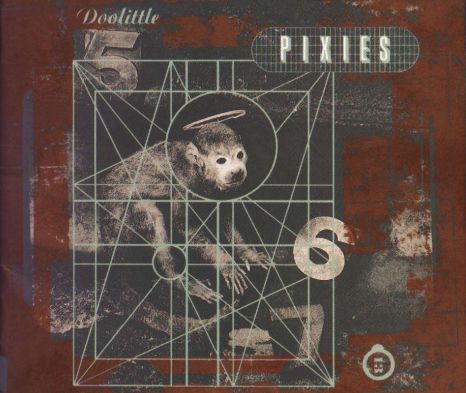 Rewind time back to 1993. My best friend Alicia and I are in the full swing of our rebellious indie adolescence, wearing Doc Martens and striped stockings to school and ferociously consuming as much new music as our young brains could absorb without dripping from our ears. The two most oft-played CDs in our cars? The Pixies’ Surfer Rosa and Doolittle, of course.

It was helpful, of course, that we could scream such gems “He bought me a soda and tried to molest me in a parking lot” across the classroom at each other and earn confused stares from other people, but let’s face it: The Pixies kicked serious, insane amounts of ass. They still do, in fact, which is why Harmonix/MTV Games have smartly chosen Doolittle as the third full-length album to be sold as DLC for Rock Band, following such rock legends as The Cars and Judas Priest.

As usual, you can buy single songs ($1.99 each) or the entire album ($18.99). It will be available on June 24th for Xbox 360 owners and June 26th for PlayStation 3 owners. I’m excited, but I have to say some of these tracks are a huge challenge and might have to be downloaded just to see how hoarse I can scream myself. “Tame,” for instance? Oh man. Might have to put down a few gallons of liquid intoxicants before I’m ready to try that one.

Harmonix and MTV Games announced today the third album to be added to the Rock Band™ Music Store catalog of downloadable content: the Pixies’ Doolittle.  On June 24th, one of the most influential rock records of the late ’80s will get new life as Rock Band™ game play.  The addition of these Pixies songs pushes Rock Band’s online catalog to more than 200 songs available, a DLC milestone with over 12 million tracks sold! Fledgling Black Francises, budding Kim Deals and die hard gamers alike can now rock out to the original master recordings of one of the Pixies’ most eclectic and ambitious releases. Upon its release in 1989, Doolittle garnered immediate critical acclaim and eventually became regarded as one of the most important alternative rock albums of the 1980s. Doolittle offers endless highlights for fans and players, including the spaghetti Western-ish flavor of “Silver,” the biblically-themed “Dead” and the pop-savvy hit single “Here Comes Your Man.” Gamers have been clamoring for these additional fourteen tracks after months of playing the album’s brilliantly surreal “Wave of Mutilation,” which was included on the original Rock Band™ game disc.

The gold-certified Doolittle was the Boston-based band’s second studio album and first for Elektra Records.

Doolittle joins Judas Priest’s “Screaming For Vengeance” and The Cars’ “The Cars” as the third full-album DLC release available at the Rock Band Music Store. With the addition of these tracks there are now more than 200 tracks available to date via disc and download purchase (complete list of tracks at https://www.rockband.com/dlc). Rock Band™continues to fly off shelves and satisfy music fans and gamers’ voracious appetite for rock as more than 12 million downloads have been purchased sinceits launch on November 20, 2007. The Rock Band™ Music
Storeallows players to preview and purchase downloadable individual music tracks and packs from the vast selection of offerings available to date without ever leaving the game as they build their own custom Rock Band™ library.