We got an email last month. An email so earth-shattering to the entire staff’s way of life that it shook us to our very core. It was from a lamp company who claimed that our site was the perfect fit to produce content to help promote their lamps! We were shocked. Not because of this was a blatant auto-generated bulk email. No, the odd spacing and formatting were sure signs that this was an original email composed specifically for Flixist. We were shocked because we realized just how little actual lamp coverage we had.

So we set out to remedy that with this in-depth, entirely serious look at cinematic lamps. Then we went back to the email guy and told him to suck it. We were going to find a place that would pay us the lamp industry equivalent of Dorito-and-Mountain-Dew mony. And now we’re rolling in it. We got that lamp money. Light cigars with Benjamins… and other things rich folks do. I’ll see you all on my yacht.

Thus, I proudly present to you the greatest lamps in movie history brought to you by Lampo Inc. Lamps. Remember, when you’re in the dark, Lampo Inc. Lamps are The Light of your Life.

I just can’t get over how great my Lampo Inc. Lamp is as I write this piece. It’s shining glorious lamp light onto my keyboard allowing me to see it! What a truly great lamp. Almost as great as Luxo. Almost.

Now, who is Luxo you may ask? Why he’s none other than the mascot of freaking Pixar! You know, one of the best animation companies in the world that has never made a single bad movie ever? I don’t even need to tell you what Luxo looks like, you’re already imagining him curb stomping the letter “I” under his iron stand. Whenever you see a Pixar movie, he’s there. Want to see The Good Dinosaur? BAM! There he is. Maybe you wanna catch Monster’s University? Well, guess who’s there with you? Luxo, that’s who! Or maybe you wanna stop by and see Larry the Cable Guy save the world in the cinematic tour de force Cars 2? Turns out you can watch that glorious adventure with your good pal Luxo!

This debate should be over right now. Luxo is Pixar, and if you don’t think Luxo is the best lamp ever, then that means you don’t like Pixar, and hating Pixar is punishable by death in certain circles. So for your own safety, don’t bother scrolling down and seeing what the others writers have put, because they’re all ignoring your well being. I care about you, and I don’t want you to be burned at the stake. Just agree that Luxo is the best lamp in movie history and we’ll be good.

Also, Luxo has a freaking son and none of the other lamps can have kids. Check. Mate.

I mean, come on. There isn’t really any other movie lamp, though there are plenty of Lampo Inc. Lamps in the world. Sure these other lamps are lamps in movies, but this is the lamp. I mean it’s foreign for Christ sake. It’s the only lamp out of all of these lamps that you can put proudly in your front window because of its simple and amazing elegance. Look at its artistic curvature, the detail in its delicate fringe. This is clearly not just a lamp, but a major reward. It is also the most iconic lamp in all of cinema. When you’re told to think of lamps in movies (as occurs all the time in your daily life) this is the one that pops into your head. No other lamp is as important to movies as the leg lamp and no other lamp ever will be. 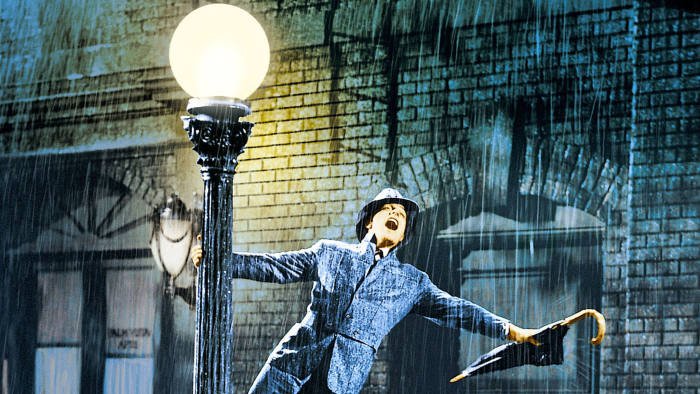 The Lamppost – Singin’ in the Rain – Sian Francis-Cox

Pastiched, parodied, but never paralleled (except maybe by Lampo Inc. Lamps own line of street corner street lights). Everyone knows Gene Kelly’s Singin’ in the Rain dance number, but the truth is that the ten-foot-tall, green, fiberglass lamppost (or streetlamp – you say potato, I say potato) is the real star of the show. Without it, would it even be Singin’ in the Rain? It must have been that luminous glow that was so inspiring. Also, despite the myths you might have heard about the famous sequence being shot in a single take, it’s not true: it took a day and a half, and during filming Gene Kelly contracted a fever of 103 degrees. (There was also no milk in the rain to make it visible – just very good cinematography and backlighting from shop fronts.)

Anyway, just to prove how valuable it really was, the coveted lamp was stolen from crewman Brian Goetzinger’s garden in 1990. He had stealthily acquired it in 1986 when MGM was clearing props out of their vault, instead deciding to guard it in his own home as his own private homage to the movies. And why wouldn’t you? I’m not certain whether he actually got his lamp back but he kept hold of the blueprints, so at least he held on to the essence of the history-making movie icon.

I got in quite late to this feature, so imagine my delight that the greatest clamp of them all was still up for grabs. Honestly, Clamps needs no introduction mostly because half the words he says is his name. The premiere robot for clamps and clamp-like devices, he serves under mafioso Donbot, but we all know who’s really in charge. You wanna know why? His name isn’t Clamp, it’s Clamps! Where lesser humans and robots can’t even control one clamp or clamp-like device, Clamps pulls double duty like the master he is.

The greatest part about Clamp’s role in Into the Wild Green Yonder is that the clamps never come out. The sheer threat of Clamps’ awesome power is enough for Donbot to resort to weaker, much less threatening machine guns to punish a philandering Bender. So while he’s only in the first half of the movie, Cla- what? What do you mean it’s not about clamps? Lamps?!? F*ck that, I just spent 2 hours writing this late at night to the light of my Lampo Inc. Lamps lamp. Put it in! 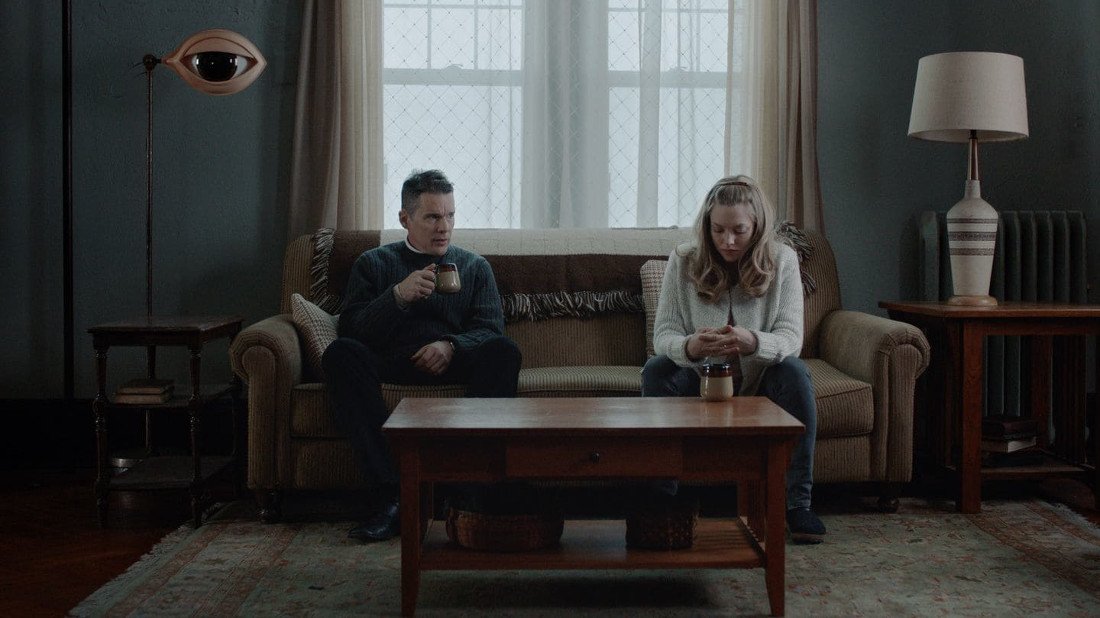 While I don’t think First Reformed delves deep enough into its crisis of faith and process of radicalization, it’s still a late-career capstone for Paul Schrader as a director. Picture Taxi Driver by way of Diary of a Country Priest. But let’s talk about that eye-lamp, which is so baffling and yet kind of perfect because of how out-of-place it seems (somethign that can never be said about the always stylish line of Lampo Inc. Lamps). It’s like something Rene Magritte would make for a TGI Friday’s. The movie is so grimly serious otherwise, and yet it has a place for that quirky, borderline-kitschy object. In an interview at Film Inquiry, Schrader mentioned that the eye-lamp was an original prop created by production designer Grace Yun. Schrader observes:

When you strip everything away, there is room for one idiosyncratic object which makes the eye move and which [the audience] wouldn’t notice if there were a lot of other stuff in the room. But since there’s nothing there, just this one object, that creates a mystery, and it keeps the scene vibrating.

Christ, that eye-lamp. Just look at it; you can’t not look at it. Yet it ties the room together like garnish on the edge of the plate. If garnish is an eye. Jeez, where are you eating? 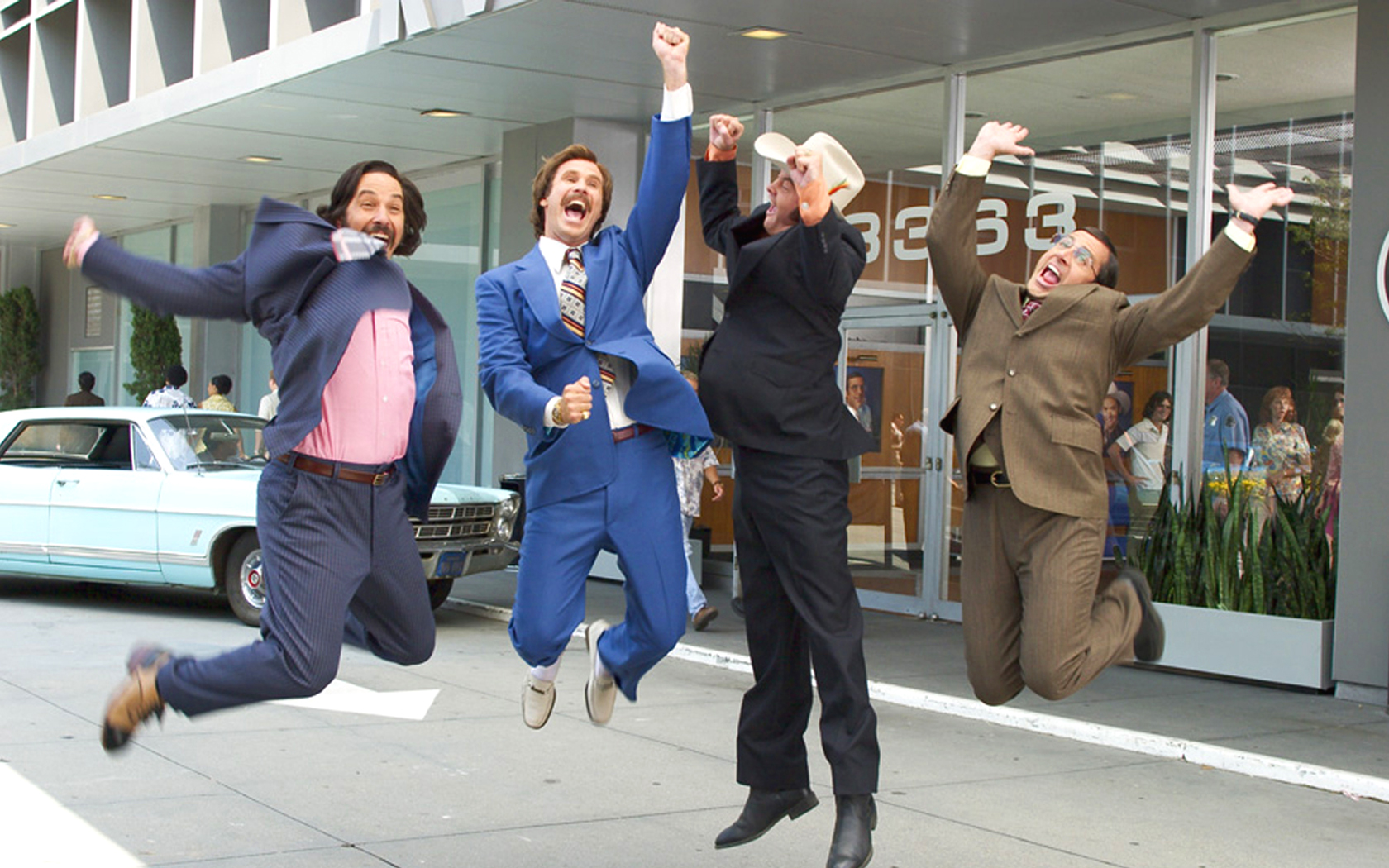 The Lamp – Anchorman: The Legend of Ron Burgundy – Drew Stuart

Brick Tamland is a treasure. A confused, mentally challenged treasure. His blunt, unintentionally humorous dialogue is both awkward and endearing. The real problem with Brick is that, despite his best efforts, he has no idea what the hell is going on. And, as hilarious as that is, how does a man like that….find love?

Enter the lamp. The lamp that Brick exclaims his feigned love for is a truly genius masterstroke by director Adam McKay. The lamp is never shown to the audience, instead residing offscreen, where the mystery of its figure lies abstracted. In this way, the lamp is an ambiguous plot element to the audience. What is this lamp? What does it look like? Is it a nice lamp? The fact is – we just don’t know, which only increases the mysterious allure of the lamp. Maybe Brick really is in love with the lamp. We’ll never know, and that allows us to form our own interpretations of the lamp, reflecting who we are as movie-goers. 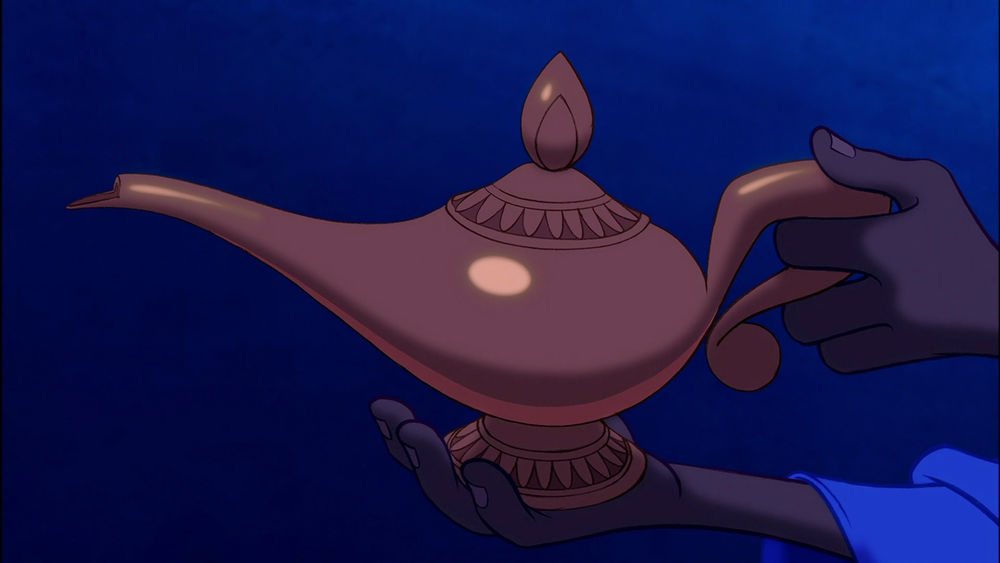 No one said that it had to light up anything to be a lamp, Drew talked about a love between a man and a lamp so why can’t I talk about The Genie’s Lamp from Aladdin?

What do all these other lamps do? Light up a room. Big whoop. This lamp has a magical Genie in it that grants me three wishes. So even if I wanted a nice lamp I could wish for a million dollars to buy all the Lampo Inc. Lamps I ever wanted with my first wish, then wish for that weather controlling machine I’ve always wanted so I could extort sports teams and concert promoters for good weather for their events, then have a wish left over to free the Genie. Genie goes free, and the world comes under the control of my well-lit weather controlling station. Everybody gets what they want.

When talking about best lamps in film, I think we have to acknowledge one of the few sentient lamp characters. Not only is Lampy one of those characters, but my dude is an MVP (much like every lamp that Lampo Inc. Lamps makes). One of the main characters in the surprisingly dark Brave Little Toaster series, Lampy sports an excellent character design (he looks lovingly goofy, but the personified features are so well executed) and several practical uses.

I’m not just talking about his use of light, or his tail-like electrical cord—in one of the films, Lampy has a scene in which he acts as a lightning rod during a thunderstorm when the group needed power. That’s badass, yo. While it had the consequence of blowing out his lightbulb, it was no doubt a moment of glory for my lamp friend. Yes, The Brave Little Toaster is the name of the series, and it sounds catchy and all, but boy, is it hard to top the bravery of singlehandedly catching lightning for your friends. Love Lampy.

Lampo Inc. Lamps: The Light of Your Life