‘Tis the season for deathmatch

The holidays are fast approaching, and that means quality time with all the family you haven’t seen since last year. Unfortunately, “quality time” can quickly devolve into awkward small talk and watching It’s a Wonderful Life if you aren’t careful.

I wouldn’t want to see that happen to anyone, so I’ve compiled a list of games you can use to keep the entire family entertained, even if they haven’t touched a joystick since Pac-Man. I’ve also included a few amazing couch multiplayer games you can play with your friends who are a little more game savvy. This is the perfect time of year to enjoy these games the way they are meant to be enjoyed, so don’t miss out!

Games you can play with the whole family 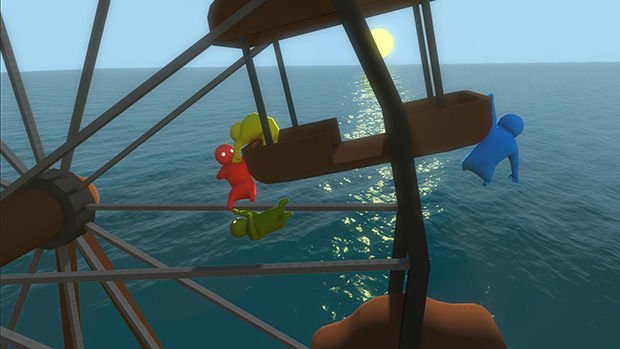 Picture two to eight drunken fat babies trying to wrestle in an over-the-top royal rumble style brawl. Now picture them on top of freight cars suspended by construction cranes. Or above a giant conveyer belt funneling trash into a fire pit. Or on top of a gondola over a dilapidated boardwalk that’s falling to pieces below them.

Gang Beasts is the perfect game for a diverse group of players (read: all your friends and family who are bad at games) because nobody, NOBODY, is good at it. You waddle around like shitty, violent babies trying to fling your friends out of the level, and nine-out-of-ten times, only succeed in flipping yourself ass-over-teakettle into the void.

The controls are, purposefully, as clumsy as crutches on a butter-smeared floor. The levels are chaotic nightmare factories that will BETRAY you by crumbling beneath your feet faster than your post-graduate dreams. There are no health bars or stamina gauges to keep an eye on it – it’s all maddening guesswork and swearing as you stumble about and learn to laugh and love again. 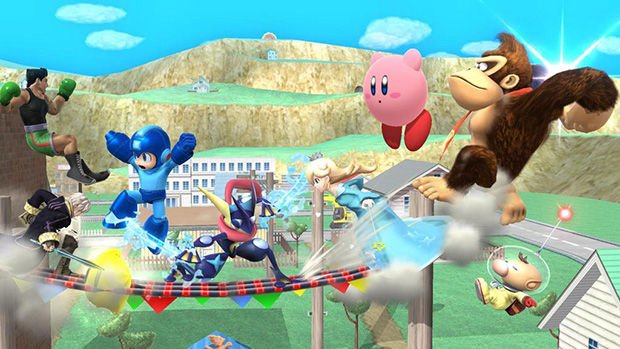 Remember the first time you played Smash way back on the N64? It was this amazing, confusing, jumbled mess you couldn’t possibly keep track of. It had these weird Nintendo mascots flying across the screen, smacking each other with fairy wands, baseball bats, and Bob-ombs. Madness! It was magical, special, and like everything else, you had to ruin it. You learned how to see past the chaos, filter out 90% of the visual information, focus only on your split-second reflector timing and meta-match up knowledge.

Well, now you can give yourself the Christmas gift of going back to that special place and time before you broke Smash into tiny, joyless, pieces. Eight-man Smash with your family is guaranteed to quash any kind of competitive edge to the game. It’s back to button-mashing silliness and yelling like crazy when someone scoops the Final Smash orb.

You can also experience the (now annual) joy of explaining to your dad, multiple times, that just because you can use his old Wiimotes to play on the Wii U, he can’t use the Wii U controller to play on the Wii. No, his tablet won’t work either. Yes, he would have to buy a whole system. No, I don’t know why they do it that way… repeat over the entirety of dinner. 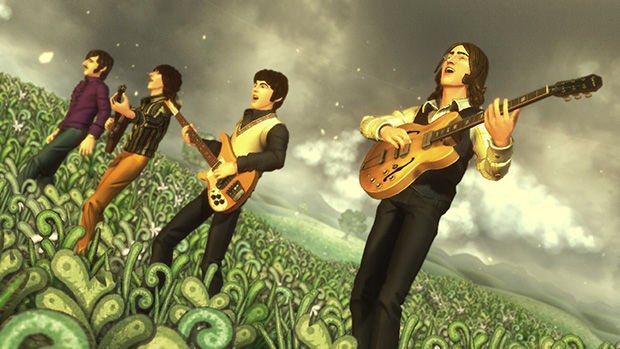 If you’re going to be hosting a get-together or two at your place during the holidays, this is the perfect chance to dust off all those old plastic instruments in the closet for one last send-off. There is no better way to say your final farewells to the dearly departed rhythm-game genre than with a night of The Beatles: Rock Band with the family (bonus points for closing out the evening with the Abbey Road medley).

I feel like I’m stating the obvious here; everyone knows Rock Band is a great party game and a non-threatening way to get your non-gamer friends and relatives to play. But to me at least, The Beatles standalone version makes a particularly great case for feelgood Christmas family time. The trippy LSD dreamscapes and classic Beatles imagery is just so damn charming and whimsical, it’s hard not to have a good time with it. Or maybe I’m biased towards the title because my own family is full of Beatles fanatics who know the lyrics to all of the songs and it’s so easy for everyone to come together and get into it (except for Grandpa, who still believes John Lennon is a long-haired Devil worshiper).

I like The Beatles, but you can also stick with regular Rock Band if that’s more your thing. Maybe your family would rather celebrate the holidays with some Queens of the Stone Age and Dead Kennedys? Why not? In fact, that sounds pretty cool. Can I come over? 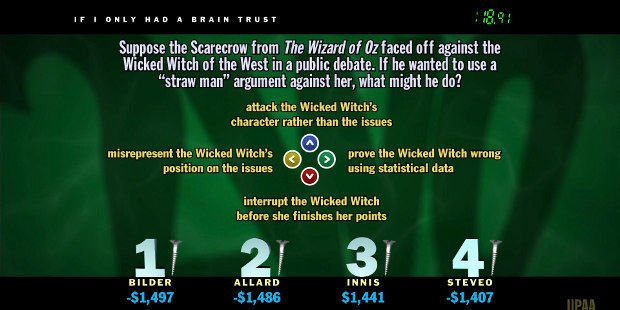 Alright, try as you might, you can’t get your family into any kind of videogame. They’re just not into cartoon babies kicking the crap out of each other, and they can’t or appreciate the reference value of Little Mac’s wireframe skin no matter how many times you explain it. But don’t worry, you can still save yourself from a Storage Wars marathon thanks to the Jack Box Party Pack.

You Don’t Know Jack is one of my favorite games to break out with non-gamers. An acerbic trivia game, anyone who has ever enjoyed a game show or dreamed of being ridiculed by a bald weirdo can get behind YDKJ. It’s been around for years and years, but I’m still not sick of Cookie Masterson and his ridiculous questions (although the Jack Attack is still a bullshit blue-shell of a comeback mechanic for dummies with slow brains and fast thumbs. I’m not bitter).

The Party Pack also includes a few other games including Fibbage, one of those “tell the most amusing lie” style games so you can show off what a clever and sneaky bastard you are. Nothing rings in the holidays like deception and rude jokes.

Best part about the Party Pack? The games can be played using phones and tablets, so you don’t have to work out some kind of spiderweb horror of USB hubs and controllers as you all huddle around the PC like cavemen witnessing their first fire.

For your hip friends who love couch multiplayer 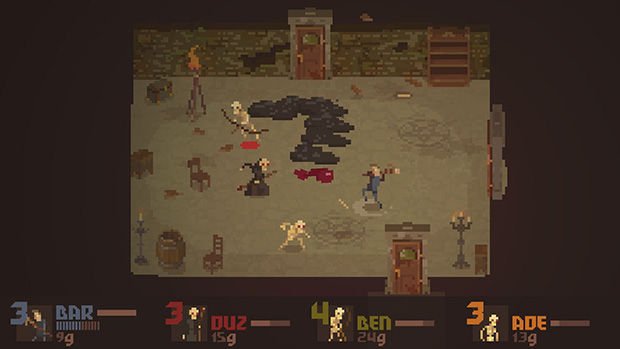 Despite its early access state, Crawl is one of the most fiendishly fun games I’ve played all year. Four players – one human hero, three ghosts controlling monsters – all playing a ghastly game of tag. Whoever lands the killing blow on the human gets to be the next human. It’s a game of momentum, heartbreak, and dicking your friends over as you level up your hero and monsters, trying to be the one to take a crack at Kourok, the Cthulhuian boss at the end of the dungeon, who the ghosts also control!

Crawl is a little more complicated than some of the other titles I’ve mentioned in this list and it might take a game or two before people grok what’s going on. But believe me, the effort is well worth it. When everything clicks, Crawl is AMAZING.

It all relies on the cooperative/competitive dynamics that spring up during the game. While all three ghosts might be trying to fight the hero, it’s not uncommon to see some strategic cherry picking going on as the hero’s health bar dwindles, every greedy little ghost trying to get their shot at bat. If one player starts to gain a little too much of a lead, you can expect the other three to gang up and try to put the kibosh on him – right up until that joint effort conflicts with their own chance at getting ahead. You’re constantly working both with and against your friends, sharing victories, then viciously stabbing each other in the back. And really, isn’t that what the holidays are all about? 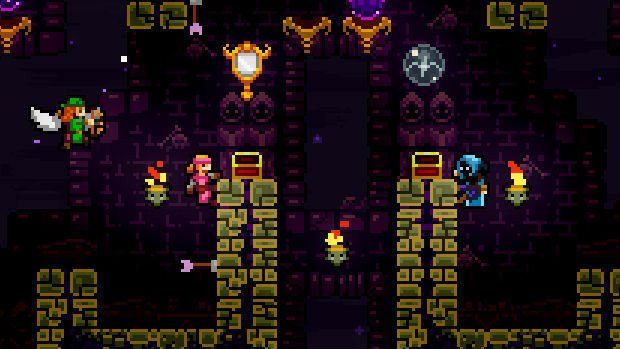 There is no shortage of four-player, single-screen, deathmatch games this year. While Towerfall Ascension is also available on the PC, it really shines on the PlayStation 4 where you can get everyone on the couch and play the game on a big screen with zero fussing about.

Towerfall pits players against each other in a kind of retro-16-bit fantasy land where you try and skewer each other with arrows. Smart game design and constantly shifting conditions keep things lively. If you have an Ouya, you can of course get the original version of Towerfall, which still holds up. Also, what happened in your life that all you have is an Ouya?

Personally though, I almost prefer the serene split-second action of the PC exclusive Samurai Gunn. It also pits four players against each other, but with swords and old timey muskets (with only three shots per life) instead of arrows. Samurai Gunn plays in many ways like the classic samurai films it draws inspiration from – long periods of careful stillness and hesitation broken by flurries of lightning-quick action. 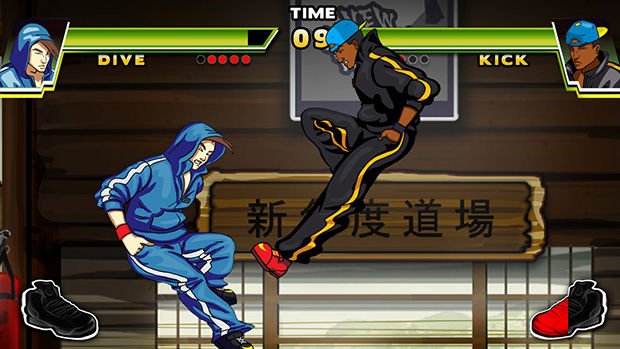 I LOVE fighting games. But my friends? They like them. Which means they have fond memories of playing Street Fighter II on the SNES, but haven’t touched one seriously since. Inviting them over to play a “friendly” game of Ultimate Marvel vs. Capcom 3 is almost the same as inviting them over for a “friendly” colonoscopy.

That’s why I love Divekick and Nidhogg. They provide the same great rush of one-on-one fighting games, but distill all the complicated systems and pretzel-hand special moves into simple and elegant control schemes. Everyone can have a good time and stand a fair chance, rather than harboring unspoken resentment at your “simple” one-touch-kill combo loops.

Both games play quick enough to pass the controllers around and keep a good-size group engaged. They’re zero-investment titles, unlike Crawl or Samurai Gunn where you need all four players there at the same time. So you can get up and go grab another beer and a handful of trail mix without leaving anyone waiting (the perfect excuse to leave after a particularly salty loss). 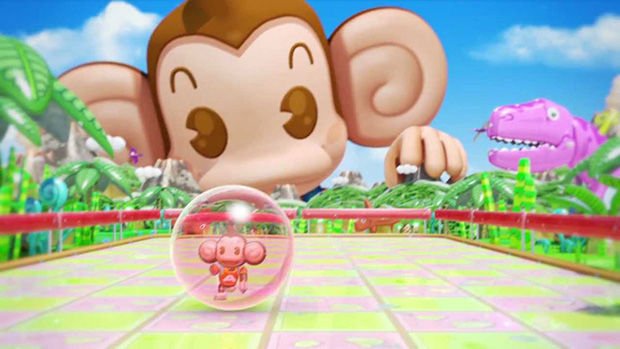 Listen, they’re classics for a reason.